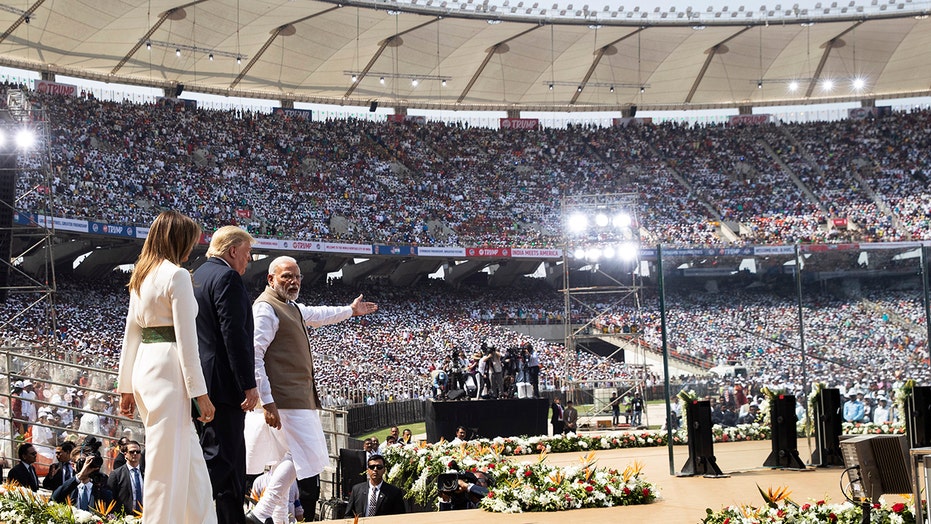 President Trump and first lady Melania visited the Taj Mahal Monday, hours after the U.S. leader gave a rousing speech to more than 110,000 at a cricket stadium in Ahmedabad, India.

The president and first lady strolled around the grounds of India's most famous attraction, taking in the sights. It was a rare occasion of the president visiting a cultural site on an international visit.

TRUMP HEADS TO INDIA, WHERE MASSIVE RALLY AND TAJ MAHAL VISIT AWAIT: WHAT TO KNOW

Trump, who once owned the Trump Taj Mahal hotel and casino in Atlantic City, N.J. which was inspired by the Indian landmark, had never visited the Indian site until now. The president’s daughter Ivanka Trump and her husband Jared Kushner were also on hand, taking photos in front of the building.

US President Donald Trump and First Lady Melania Trump pose as they visit the Taj Mahal in Agra on February 24, 2020. (Photo by Mandel NGAN / AFP) (Photo by MANDEL NGAN/AFP via Getty Images)

Earlier, Trump was greeted by large crowds at the rally where he announced a $3 billion deal that will send state-of-the-art military helicopters to the country.

Trump's motorcade passed seemingly endless crowds in Ahmedabad with many cheering and waving American flags on the way to the 110,000 capacity Sardar Patel Stadium where the rally was conducted.

Large billboards were spread throughout the route showing Modi alongside Trump and his wife Melania.

A man takes a selfie with portraits of U.S. President Donald Trump and Indian Prime Minister Narendra Modi painted on a wall ahead of Trump's visit, in Ahmedabad, India, Tuesday, Feb. 18, 2020. Trump is scheduled to visit the city during his Feb. 24-25 India trip. (AP Photo/Ajit Solanki)

Near the entrance to the stadium, camels on either side of the road were seen greeting the motorcade, which the announcers described as a "camelcade." The largest cricket stadium in the world appeared to be full, with banners displaying the Trump's name throughout.

Before Modi and Trump came out on stage, the song "Macho Man" by the Village People was heard playing in the stadium. When the music stopped, they arrived on stage, and both leaders held the arms of each other into the air.

Shortly after each country's national anthem played, Modi began speaking to the crowd about shared values and ideas as Trump sat in his chair beside Melania. All three were located in a large bulletproof chamber that took up most of the stage.

When Modi handed the podium to Trump, the president thanked those in attendance for the welcome he received, adding that he and Melania would remember the hospitality given.

"America will always be faithful and loyal friends to the Indian people," Trump said. He announced that he will sell $3 billion worth of state of art helicopters and other equipment to the country.

"I am pleased to announce that tomorrow our representatives will sign deals to sell over $3 billion in the absolute finest state of the art military helicopters and other equipment to the Indian armed forces," Trump said.

He also announced that his administration is working with Pakistan to crack down on terrorists operating in the country. At the same time, he exclaimed his relationship with Pakistan is a "very good one."

"The United States and India are also firmly united in our iron-clad resolve to defend our citizens from the threat of radical Islamic terrorism," Trump said. "Both of our countries have been hurt by the pain and turmoil of terrorism and that terrorism brings."

Trump gave his predictions on poverty and the future of India on the heels of a 2019 United Nations Development Programme report which said that 271 million people were lifted out of poverty from 2005 to 2017.

"India will soon be the home of the biggest middle class anywhere in the world," Trump said. "And within less than 10 years, extreme poverty in your country is projected to completely disappear. The potential for India is absolutely incredible."