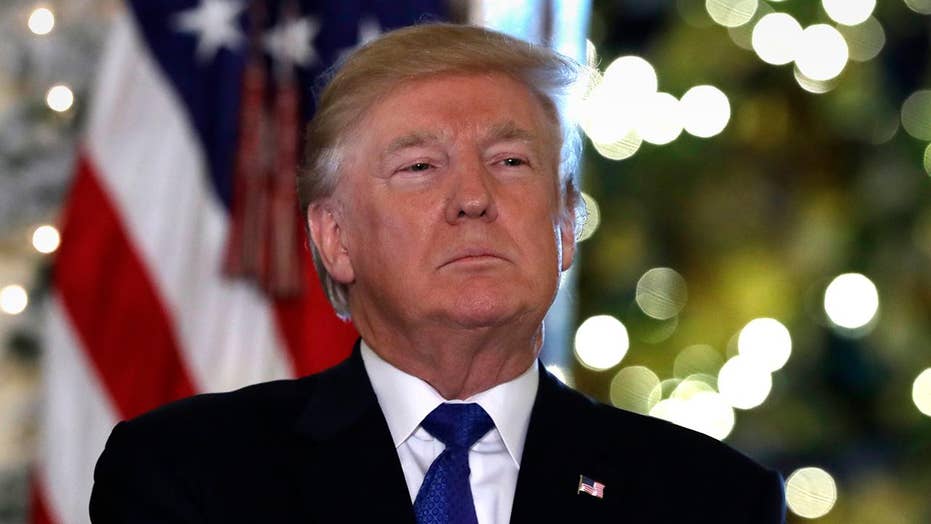 President Trump on Wednesday made his closing argument for passing a sweeping tax reform package, dangling the prospect of Americans seeing tax cuts by February if Congress can pass a bill by Christmas.

“We're so close right now, so close,” the president said during a speech at the White House.

The president spoke as House and Senate negotiators were holding a meeting on a compromise plan that still must pass both chambers. Trump declared they have reached an agreement that will “deliver more jobs, higher wages and massive tax relief for American families and for American companies.”

Then he lit a fire under Congress to get a bill to his desk next week.

“I’m excited to announce if Congress sends me a bill before Christmas, the IRS -- this is just out, this is breaking news -- has just confirmed that Americans will see lower taxes beginning in February,” Trump said. “Just two short months from now.”

GOP leaders in Congress have been hammering out deal for a projected, $1.5 trillion compromise plan.

Both chambers have passed tax bills, but they now have to blend them into a final piece of legislation.

“We want to give you, the American people, a giant tax cut for Christmas,” the president said. “When I say giant, I mean giant.”

Trump said during his speech that a family of four earning $75,000 a year would see an income tax cut of more than $2,000, slashing their tax bill in half, if enacted.

“Our current tax code is burdensome and unfair,” Trump said. “It's exported our jobs, closed our factories and left millions of parents worried that their kids will have less opportunity than the last. Our factories have left.”

“They're even larger than anticipated,” he said.

Once the legislative process of merging the tax bills is complete, it will be sent back to the House and Senate for final passage. A final vote is expected next week.

During his speech, the president invited several families to come up to the podium and say how tax reform would affect them.

“With the tax savings that we'll see, we are going to put that money into home renovations,” one man said.

In a flurry of last-minute changes that could profoundly affect the finances of millions of Americans, House and Senate negotiators agreed to expand a deduction for state and local taxes to allow individuals to deduct income taxes as well as property taxes. The deduction is valuable to residents in high-tax states like New York, New Jersey and California.

Negotiators also agreed to set the corporate income tax rate at 21 percent, said two congressional aides who spoke on condition of anonymity because they were not authorized to publicly discuss private negotiations. Both the House bill and the Senate bill would have lowered the corporate rate from 35 percent to 20 percent.

Negotiators also agreed to cut the top tax rate for individuals from 39.6 percent to 37 percent in a windfall for the richest Americans. The reduction is certain to provide ammunition for Democrats who complain that the tax package is a massive giveaway to corporations and the rich.

Final passage of the bill in the House and Senate would give Trump his first major legislative win. But Democrats are already putting up another roadblock, arguing the final Senate vote should be delayed until January, when newly elected Alabama Democrat Doug Jones joins the Senate and narrows the GOP’s majority to 51-49.