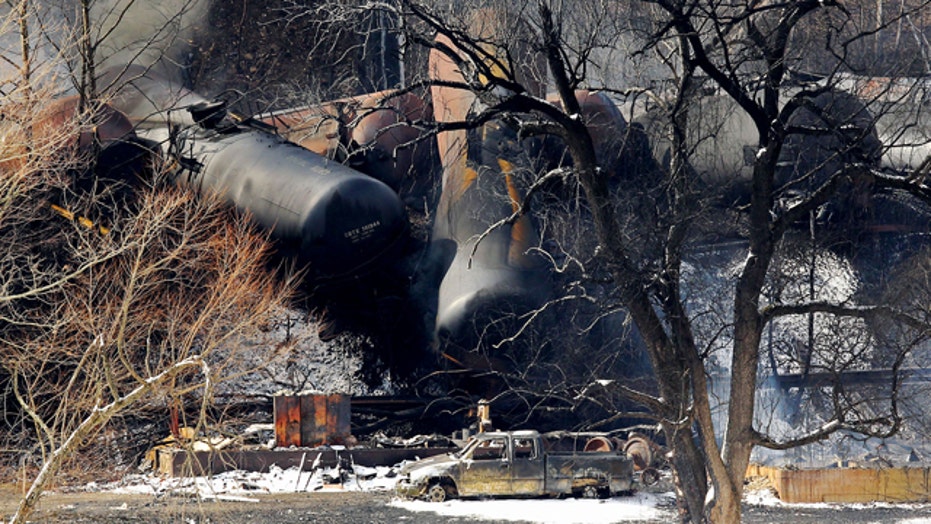 The derailment of a train in West Virginia that sent flames soaring and at least some of the 3 million gallons of crude oil onboard into a Kanawha River tributary has prompted a renewed call for the approval of the Keystone XL pipeline as a safer alternative to rail transportation.

Daniel Kish, an Institute for Energy Research vice president, said Wednesday that trains remain a safe way to move oil and that the U.S. rail industry has met the demands of the recent domestic-energy boom.

But he said underground pipelines are safer.

“Any time you make more trips -- whether it’s trains, trucks or buses -- accidents increase,” he said. “I’m not trying to scare people. But the records show that if you move more stuff there will be more problems.”

Kish pointed to a State Department environmental-impact study that shows the number of stations for loading and unloading oil across Canada and the United States increased roughly 10-fold over the past four years. “I’m not opposed to these things being built,” Kish said. “But I have to say to myself: 'The fewer the number, the safer the transportation, which leads me to the pipeline being built.' "

The effort to complete the 1,700-mile-long pipeline, which would carry Canadian crude oil to Gulf Coast refineries, started six years ago and has become one of the country’s most politically charged issues.

Congress approved legislation this month to complete the XL pipeline extension, from Canada to Nebraska, after Republicans took control of the Senate in January. Republicans and other supporters argue the pipeline will create tens of thousands of new jobs and reduce the country’s dependency on foreign oil. However, President Obama has vowed to veto the bipartisan-backed bill, as long as the State Department is still conducting its own review of the TransCanada Corp. application.

Pipeline critics argue that drilling for crude in Canada’s tar sands will emit too much greenhouse gas and contribute to global warming. While supporters say pipelines are safer, critics say neither mode of transportation is safe.

"We've had 6,000 pipeline blowouts or leaks over just the past two decades," said Bob Deans, with the Natural Resources Defense Council.

In addition to the accident Monday in southern West Virginia, two other major rail incidents have occurred in the U.S. in roughly the past 15 months -- a train collision in Casselton, N.D., in December 2013, and an April 2014 derailment in Lynchburg, Va.

No deaths were reported in any of the three accidents. However, 47 people were killed in a July 2013 derailment in the Canadian town of Lac-Megantic.

All four trains were carrying crude oil from the Plains States’ oil rich Bakken shelf. Crude from there also will go the Gulf Coast refineries if the pipeline is completed.

The office of North Dakota Sen. John Hoeven, a co-sponsor of the Keystone XL bill, argued it will take a mix of ways to safely transport oil when asked about the recent accident.

"The Keystone XL pipeline is about building the right kind of energy infrastructure plan for our country," his office said in a statement. "That means the right mix of pipelines, rail and roads to move energy as safely, cost-effectively and efficiently as possible."

The accident occurred during a heavy snowstorm, igniting at least 14 tankers and burning down a house.

In addition, hundreds of families were evacuated and nearby water treatment plants were temporarily closed, prompting Gov. Earl Ray Tomblin to issue a state of emergency.

One person was treated for potential inhalation issues, but no other injuries were reported, according to a news release from CSX, the train company.

The company and the Federal Railroad Administration are assisting in the National Transportation Safety Board investigation.

“This accident is another reminder of the need to improve the safety of transporting hazardous materials by rail,” said acting agency Chairman Christopher Hart. “If we identify any new safety concerns as a result of this derailment, the board will act expeditiously to issue new safety recommendations.”

Meanwhile, the Transportation Department is weighing tougher safety regulations for rail shipments of crude, which can ignite and result in huge fireballs.

But the three recent accidents in the U.S. all involved tank cars that already meet a higher safety standard than what federal law requires -- leading some to suggest even tougher requirements that industry representatives say would be prohibitively costly.