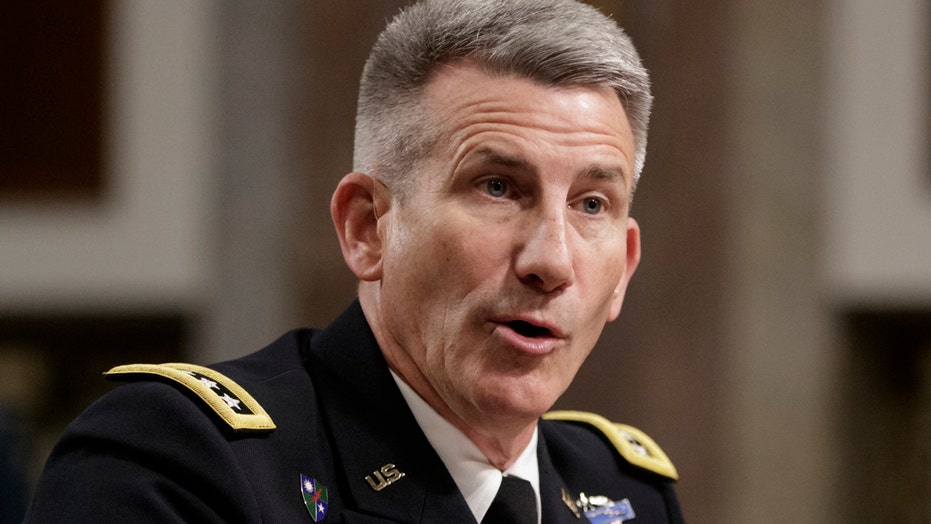 In a stark admission, the top U.S. commander in Afghanistan told Capitol Hill lawmakers Thursday that after 15 years of war, the conflict remains a “stalemate” – and said thousands more troops are needed to train Afghan forces.

Army Gen. John W. Nicholson, Jr. offered lawmakers a grim assessment about the prospects for truly ending a war that so far has cost more than 2,000 American lives -- and billions of dollars -- since 2001. The challenge, he testified, is made even tougher by Russia and Iran’s aid to the Taliban, amid signs the militant group is making territorial gains.

“I believe we're in a stalemate,” Nicholson told Senate Armed Services Committee Chairman John McCain, R-Ariz., when asked directly if the U.S. and its allies are winning or losing.

He said he has “adequate” resources for counterterrorism, but is facing a shortfall of a few-thousand troops to train Afghan forces.

He made clear those additional troops could come from allies as well as the U.S., and said the subject would be on the table when Defense Secretary Jim Mattis attends a NATO defense meeting next week in Brussels.

At the Senate hearing Thursday, Nicholson also told lawmakers a U.S. special forces soldier had been “severely wounded” that morning in Helmand Province in southern Afghanistan. Twelve Americans have been killed in Afghanistan since October.

In further evidence that the war is far from over despite then-President Barack Obama declaring an end to the combat mission in 2014, the United Nations reported Monday a record number of Afghan civilians were killed in Afghanistan last year. The report said nearly 3,500 were killed and nearly 8,000 wounded. A government watchdog group also says the Afghan government only controls 60 percent of the country right now.

Five Americans continue to be held hostage in Afghanistan, according to Nicholson.

At the White House, Press Secretary Sean Spicer said President Trump would “heed the advice” of his generals and defense secretary, but said no decision was imminent.

Restrictions on troop levels in the past administration forced the U.S. military to rely on expensive contractors.

"We have roughly a two-to-one ratio of contractors to soldiers,” said Nicholson. Currently, there are 8,400 American troops in Afghanistan, which would put the number of civilian contractors at nearly 17,000. Nicholson said soldiers from the 1st Infantry Division based at Ft. Riley, Kansas, were forced to stay home when their aviation brigade deployed to Afghanistan to adhere to troops limits set under the Obama administration.

“This contract for maintenance runs into the tens of millions of dollars, and then the soldiers who are trained to be mechanics are sitting back at Fort Riley not having the opportunity to do their job. So this has a direct impact on army readiness and it also costs us more money,” Nicholson said.

Some say Afghanistan has become the “forgotten war,” despite more American troops on the ground there than in Iraq engaged in the ISIS fight. The subject rarely surfaced on the campaign trail. President Trump mentioned Afghanistan just once to express gratitude for Americans serving there, in prepared remarks while visiting U.S. Central Command in Tampa, Fla., earlier this week.

While Trump has given his generals 30 days to come up with a draft plan to ramp up the ISIS fight, the same request was not made for Afghanistan, where Nicholson says the Russians and the Iranians are now actively supporting the Taliban.

“When we look at Russia and Iranian actions in Afghanistan, I believe that, in part, they’re [trying] to undermine the United States and NATO,” he said.

Russia's support for the Taliban began last year, according to Nicholson.

Nicholson said Iran is actively recruiting Afghans to fight in Syria, a situation that could blow back on Kabul when those fighters return home.

Sen. Gary Peters, D-Mich., questioned the resources spent on the war so far, a number that has reached $117 billion.

"Adjusted for inflation the U.S. has spent more on Afghanistan's reconstruction than it did on the Marshall Plan to rebuild Western Europe after World War II. Reconstructing Afghanistan has now become the largest expenditure to rebuild a single country in our nation's history,” he said.

There are fewer American troops on the ground in Afghanistan than any time since 2002. Following the reduction of 1,400 troops at the end of the year, the number stands at a mere 10 percent of the 100,000 at the height of the Obama administration’s surge in 2011.

While some questioned the high cost of America’s longest war, Sen. Tom Cotton, R-Ark., asked Nicholson, “If the United States just said ‘we've had enough, you know, 15 years is long enough, let's just roll up our operation there and come home,’ do think that we would face the risk of an attack planned and directed from Afghanistan?”