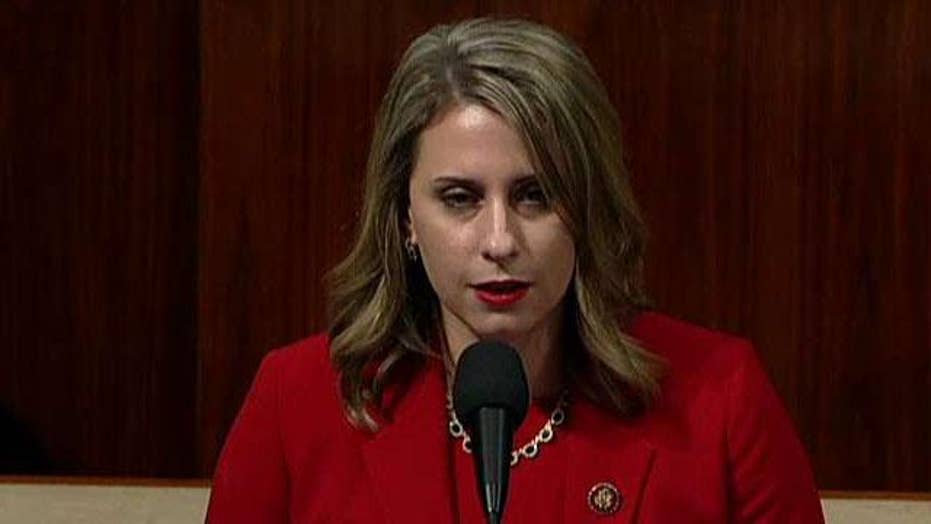 EXCLUSIVE: The leader of the National Republican Congressional Committee (NRCC) sent a memo to all House Republicans Saturday with an "urgent call to arms" that Democrats are trying to "steal" Tuesday's special election for California's 25th Congressional District seat, Fox News has learned.

Tuesday's special election is between Republican Mike Garcia and Democrat Christy Smith. The winner will fill out the term of freshman Rep. Katie Hill, D-Calif., who resigned in October 2019 amid a "throuple" ethics scandal.

Democrats, however, have blasted Trump and the GOP for trying to restrict voting access. They argue the additional early voting center was needed so voters in the diverse city of Lancaster wouldn't be disenfranchised.

There's currently a total of 10 voting centers open for the special election.

Fox News exclusively obtained a memo sent by Emmer to House Republicans on Saturday urging them to "raise hell" about the new voting center.

"We're issuing an urgent call to arms regarding the vote-by-mail CA-25 special election happening this Tuesday," Emmer wrote to his fellow Republicans.

The GOP memo says that as of Friday, 50,191 Republicans (45 percent) have returned their ballots compared to 39,230 Democrats (35 percent) and 16,528 (15 percent) from unaffiliated voters. Republicans argue the Democrats were trying to make up ground by bringing a last-minute voting center to a more left-leaning community.

Los Angeles County election officials announced the Lancaster voting center on Friday that will be open Saturday, Sunday and Monday for early voting. But Emmer said the Democrats in Lancaster already had access to a voting center in Palmdale, "which is a 10-minute drive from the new Lancaster center."

"It is very clear the Democrats are trying to steal this election and we need your help raising hell on social media, TV, radio, etc." Emmer wrote in the memo Saturday.

With the coronavirus pandemic health concerns, Gov. Gavin Newsom issued an executive order March 20 requiring all registered voters to receive ballots in the mail to allow them to stay home and still participate in Tuesday's election. In-person voting options were still required and would allow same-day voter registration opportunities, too.

PELOSI SNAPS AT REPORTER WHO MENTIONS TRUMP: 'DON'T WASTE YOUR TIME OR MINE ON WHAT HE SAYS'

But Democrats in Lancaster were raising concerns they didn't have a voting center in their diverse community and that would cause poor turnout for African-Americans, according to LAist.com. The mayor of Lancaster, R. Rex Parris, a Republican and supporter of Garcia, also wanted an additional vote center.

"This is something the county should fix immediately," Parris told LAist.com. "There should not be even the appearance of affecting the outcome by limiting the ability to vote."

"I want Mike to win, I think he'd be a better congressman, but I don't want to 'jimmy' the election," Parris added.

But in the memo, Emmer pushed back on any suggestion that Republicans are trying to disenfranchise minority voters.

Emmer suggested the following response to GOP members: "Every single registered voter was mailed a ballot. Is the implication that minority voters do not have mailboxes?"

Turnout is going to be especially important in this swing district.

The race is already in the national spotlight because Hill flipped the seat to Democrat control in the 2018 election amid the "blue wave." Now, Republicans are determined to win it back in a tight race.

"We are on the verge of shocking the world by flipping a California congressional seat for the first time since 1998 that a Democrat won by 9 points in 2018," Emmer wrote, referencing Hill's victory two years ago. "Democrats know this and they are doing all they can do to steal the election."

Trump has inserted himself in the mix by giving his full backing to Garcia, a former Navy combat pilot. While Smith, a Democratic state legislator, netted the endorsement of former President Barack Obama and former Secretary of State Hillary Clinton.

The winner Tuesday will fill out Hill's term through January 2021. There will be another election in November for the full two-year term starting in 2021.