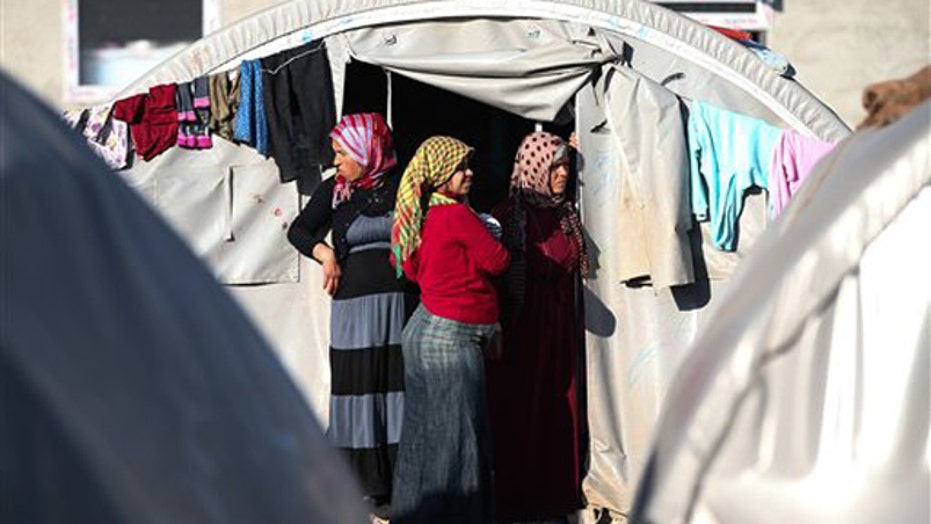 US Syrian refugee effort a backdoor for ISIS?

Months after Congress authorized the mission, the Obama administration is moving ahead with plans to train and arm moderate rebel forces in Syria -- but is it too late to make a difference?

The question is being raised in foreign policy circles, most recently by former U.S. Ambassador to Syria Robert Ford, at a time when the Islamic State has emerged as the dominant force. What’s left, some worry, is a patchwork of rebel groups too weak and disorganized to mount a viable campaign against ISIS – and too close to other jihadists to trust.

“We have to deal with reality as it is,” Ford said in a recent interview with McClatchy.

The diplomat suggested many rebel fighters at this point are too cozy with the Al Qaeda-tied Nusra Front, and the training effort is too small to make a difference anyway.

The comments are a stark reversal for Ford, who resigned the ambassador post last May saying the administration was too slow to arm the rebels, and had no coherent policy on how to address the Assad regime. In a Foreign Policy op-ed six months ago, he declared the moderate rebels had “gained ground” in certain parts of Syria and were in fact breaking with the Al Qaeda affiliate.

Now, he says the opposite, charging that the moderates number fewer than 20,000, and have not been strong enough to engage in anything but “defensive battles.”

He said that while the U.S. “has looked the other way,” moderate groups tired of broken promises of assistance have worked with Nusra and other extremists who have gotten their hands on weapons funneled there by the West.

Meanwhile, the effort to train and equip the rebels charges ahead.

The administration says they’ve screened about 1,200 moderate rebels for possible training. The U.S. and Turkey also signed an agreement Thursday to train and arm the rebels, at a base in Turkey. That would be in addition to training facilities in Saudi Arabia and Qatar.

Officials called the latest agreement "an important step" in the strategic partnership between Turkey and the United States. As many as 1,000 U.S. troops have been sent across the region to do the training.

Outgoing Pentagon spokesman Rear Adm. John Kirby said the rebels will learn to use basic military equipment and skills, including firearms, communications and command and control. "We're working our way through the screening process now,” he said. "We're going to be very deliberate about this. And it's going to be individual by individual. And so, that's going to take some time."

The announcement, however, provided no detail on what kind of weapons the two countries would be providing, or how many moderates they intend to train. The U.S. and Gulf states have been providing light weapons to the rebels since 2013. In 2014, reports indicated that the U.S. and Saudi Arabia had given the rebels anti-tank missiles, but it was neither confirmed nor denied by the White House at the time.

Critics worry it is a little too late, pointing out that since Congress passed its authorization in September, ISIS has gained strength and territory across Syria, Iraq and beyond. The terrorist organization has bolstered its recruiting with disaffected moderates, as well as forced membership, according to reports. Fighters once committed to the moderates’ cause have since chosen other outlets, like the Nusra Front. Nusra is considered a terrorist organization by the U.S., which has launched several airstrikes against the group since last fall.

All this has caused bad blood, complex relationships and confusion, with the list of so-called “moderates” appearing to grow thinner.

“The basic problem we have at this point is there’s anywhere between 30 and 70 fragmented rebels movements and factions in the field, depending on who you are counting, and they are nowhere near any kind of unified movement with common goals and values,” said Anthony Cordesman, senior national security analyst at the Center for Strategic and International Studies, “and the majority are Islamic extremists now, no matter what they were when they started.”

Arming and training is still the right thing to do, Cordesman told FoxNews.com. But he acknowledged the best time to do this would have been years, not months, ago.

“Do I wish we armed them and gave them critical support in 2011? Yes I do,” he said. “Would it have worked? God only knows. There are no good options. This is the real world.”

U.S. commanders said 6,000 ISIS militants have been killed in nearly 2,000 U.S. airstrikes in Syria and Iraq as of January. The U.S. military also previewed a major Iraqi campaign to retake the strategic city of Mosul, now under ISIS control.

Toppling Assad was an early U.S. goal that has since dropped off the radar, much to the consternation of U.S. lawmakers like Sen. John McCain, R-Ariz., who has wanted to arm the rebels against both ISIS and Assad from the start.

“And one of the other things we have got to do is, we can't train young people in Syria and send them back into Syria … to be barrel-bombed by Bashar Assad. That is also immoral.”

John Bolton, former United Nations ambassador under the George W. Bush administration, said the train-and-equip mission “might have made some difference” three years ago.

“I’m very skeptical,” he said of the U.S.-Turkey deal.