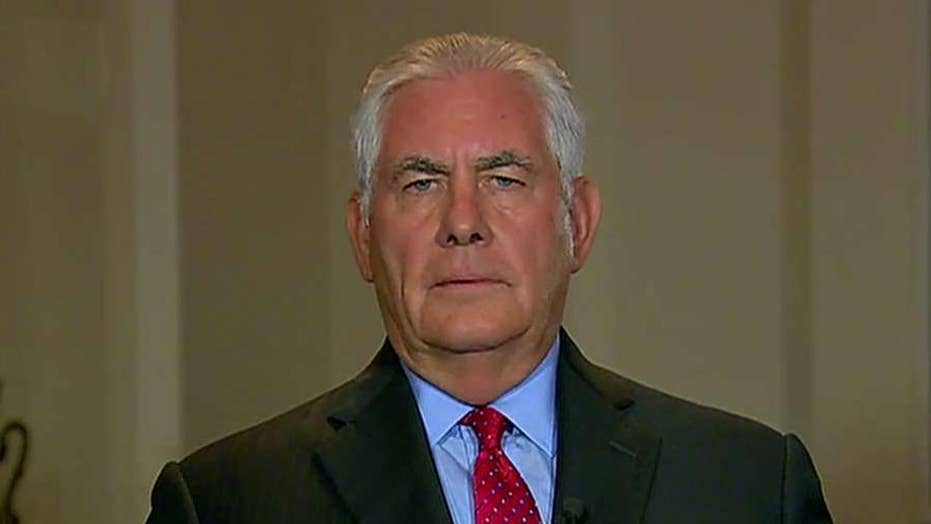 Secretary of State speaks out on 'Special Report'

Secretary of State Rex Tillerson told "Special Report with Bret Baier" Tuesday night that that the 2015 nuclear deal between the U.S., five other world powers and Iran "really has to be revisited."

Tillerson told host Bret Baier that a key sticking point in the current agreement is the so-called "sunset clause," which automatically lifts most key restrictions on Iran's nuclear program by 2030.

"Unfortunately, this is what [U.S.] governments in the past did with North Korea," Tillerson said. "They just simply entered into agreements that were short-lived or were easily cheated on.

"And I think that's the president's assessment of the Iranian nuclear agreement, is that it's not a stiff enough agreement, it doesn't slow their program enough and holding them accountable is difficult under the agreement."

Tillerson spoke to Fox News hours after President Trump addressed the United Nations General Assembly and urged the nations of the world to stop Iran's nuclear program from reaching its full potential.

The president referred to the Tehran theocracy as a "reckless regime, one that speaks openly of mass murder, vowing death to America, destruction to Israel and ruin for many leaders and nations in this room."

Trump also slammed the nuclear deal -- negotiated with Iran by the U.S., Russia, China, France, Great Britain and Germany --as "one of the worst and most one-sided transactions the United States has ever entered into."

"Frankly, that deal is an embarrassment to the United States," Trump proclaimed, "and I don’t think you’ve heard the last of it, believe me."

Tillerson told Fox News that "the president really wants to redo that deal," but admitted that the U.S. would need "the support, I think, of our allies, the European allies and others, to make the case ... to Iran that this deal really has to be revisited."

"Ultimately, though, we're going to need the assistance of the neighbors in the region," the secretary of state said. "We have strong support in our trilateral security arrangements with Japan and South Korea. But we also are in very, very constant dialogue with China and with Russia, because they have a very important role they can play here to also carry the message ... that this program really has to be halted."