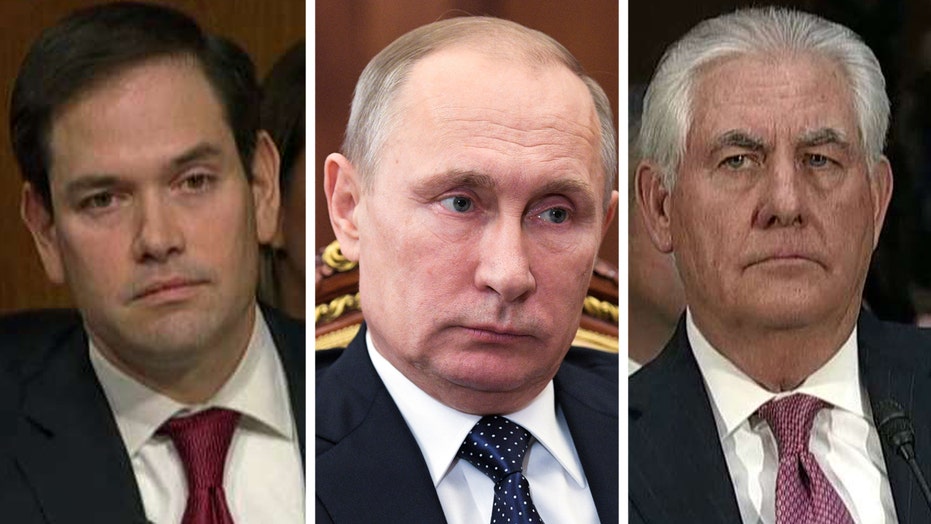 Rubio grills Tillerson on if Putin is a war criminal

During the tense back-and-forths at the Senate Foreign Relations Committee confirmation hearing, Rubio, R-Fla., cross-examined Tillerson on policy regarding Russia, Cuba, Saudi Arabia and the Philippines. At the end of Rubio's second questioning period, Tillerson sought to allay any concerns the aggressive Rubio may have had.

"There seems to be some misunderstanding that I see the world through a different lens, and I do not," Tillerson said. "...But I'm also clear-eyed and realistic about dealing with cultures."

Tillerson's statement followed a heated initial session during which the ExxonMobil CEO refused to specifically call Putin a "war criminal."

"I find it discouraging your ability to cite that, which I think is globally accepted," Rubio said.

That exchange mirrored later questions by Rubio, who tried getting Tillerson to categorize Saudi Arabia as a "human rights violator" and denounce the practices of controversial Philippines President Rodrigo Duterte.

Still, Tillerson took a noticeably harder line toward Putin and Russia than Trump has done during the transition period and prior to it.

“Russia today poses a danger, but it is not unpredictable in advancing its own interests," Tillerson said during his opening statement. "...Our NATO allies are right to be alarmed at a resurgent Russia.”

Tillerson called Russia an "unfriendly adversary" during later testimony, stopping short of saying the nation was an enemy of the U.S.

Russia took center-stage during the early portion of the hearing for Tillerson. Senators grilled Tillerson amid swirling questions about alleged meddling in U.S. politics by the Kremlin and Tillerson’s own business ties to Russia.

"My love of country and my patriotism is going to dictate that I serve no one's interests but that of the American people," Tillerson said.

Tillerson said that Russia had no legal claim to Crimea -- "that was a taking of territory that was not theirs" -- and said the Obama administration should have provided Ukraine with help defending its borders.

"The absence of a very firm, forceful response to the taking of Crimea was judged by leadership in Russia as a weak response," Tillerson said.

He took aim at China’s “illegal” building of man-made islands in the South China Sea and radical Islam, which he said posed “a grave risk to the stability of nations and the well-being of their citizens.”

On Syria, Tillerson said the U.S. currently had too many competing goals and needed to focus on defeating ISIS before a discussion could occur about who should lead the country. The Obama administration's dual priorities of ousting President Bashar al-Assad and eradicating ISIS were sometimes at odds with each other, Tillerson said.

Tillerson called ISIS an imminent threat but named cyber intrusions as the "greatest and most complex threat" facing the U.S.

He also said the American government had “stumbled” under the Obama administration.

“If we do not lead, we risk plunging the world deeper into confusion and danger,” Tillerson said.

"A little of both," Tillerson said to laughs.

On the topic of Trump's frequent use of Twitter, Tillerson said he wouldn't "tell the boss how to communicate with the American people. That's gonna be his choice."

Tillerson testified a day after a contentious Senate session involving Attorney General nominee Sen. Jeff Sessions. The audience at Tillerson’s Senate Foreign Relations Committee hearing again appeared to be filled with protesters, including Code Pink activists who were dressed in Statue of Liberty garb, a man outfitted in a suit made of money and some protesters suited up in T-Rex costumes – a play on Tillerson’s name.

One early protester was ejected after she screamed “I reject you!” at Tillerson.