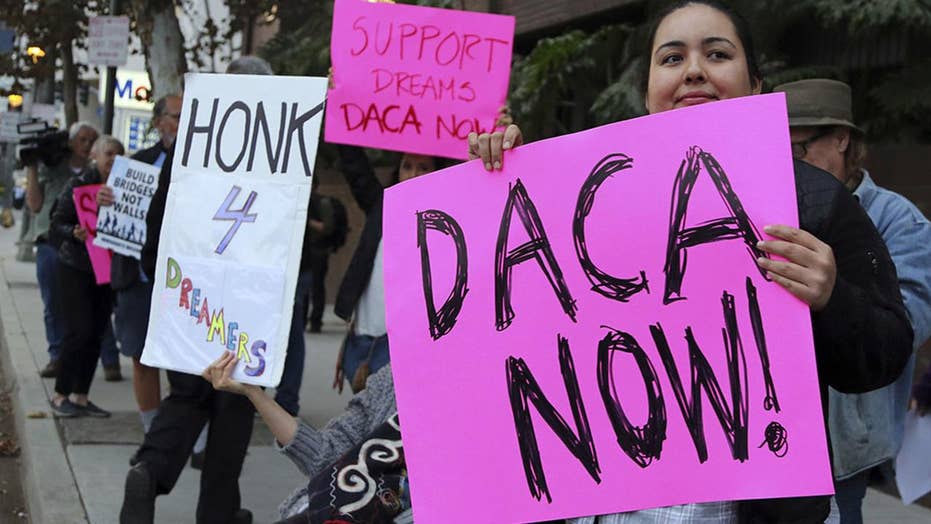 EXCLUSIVE – Nearly 60,000 immigrants with arrest records -- including 10 accused of murder -- have been allowed to stay in the United States under the Obama-era Deferred Action for Childhood Arrivals (DACA) program, the Department of Homeland Security (DHS) revealed Monday.

According to DHS, 59,786 DACA recipients have been arrested while in the U.S. -- approximately 7.8 percent of all who have been approved to remain in this country under the program since it was created in 2012. Of those, 53,792 were arrested before their most recent request for a so-called "grant of deferred action" was approved. Another 7,814 were arrested after their request was approved.

Francis Cissna, U.S. Citizenship and Immigration Services (USCIS) director, told “Fox & Friends" the agency wants to release as much data about DACA as possible for the public and lawmakers to be informed.

“I would like people to keep in mind . . . whatever they do, I would hope that we, at USCIS, would be able to turn down these people . . . if we think they’re a public safety threat . . . if someone is a gang member . . . even if they don’t have a conviction,” Cissna said.

Of the 53,792 DACA recipients with a "prior" arrest, more than 4,500 had been arrested on allegations of assault or battery; 830 arrests were related to sex crimes -- including rape, sexual abuse or indecent exposure; and 95 arrests were made on warrants for kidnapping, human trafficking or false imprisonment. Ten such arrests -- or 0.02 percent of all arrests -- were made in murder cases.

A DHS spokesman said the department was releasing the arrest data in response to inquiries "from Congress and others" for more detailed information on DACA recipients, including DACA criminal activities.

The arrest data has been made public as Congress prepares to consider a pair of immigration bills put forward by Republicans that contain provisions aimed at helping immigrants brought illegally to the U.S. as children.

“You could be arrested a whole lot of times and still get DACA," Cissna told "Fox & Friends" on Monday. "The data we’re putting out is only arrests, so presumably those people who had murder arrests, rape arrests -- that type of seriousness -- either got acquitted, charges were dropped or they plead something down, I would hope . . . there are a lot of crimes on the list we published that are misdemeanors – and they could've been convicted and still could’ve gotten DACA if they only had two of those misdemeanors.”

The current version of one of the bills, penned by conservative Rep. Bob Goodlatte, R-Va., would extend DACA protections for renewable six-year periods. Recipients could later apply for permanent residency and eventually citizenship. An expanded number of children who arrived legally with parents who have obtained work visas also would be covered.

President Trump announced this past September that he was ending the DACA program, though a series of federal court rulings has kept it functioning for the time being.