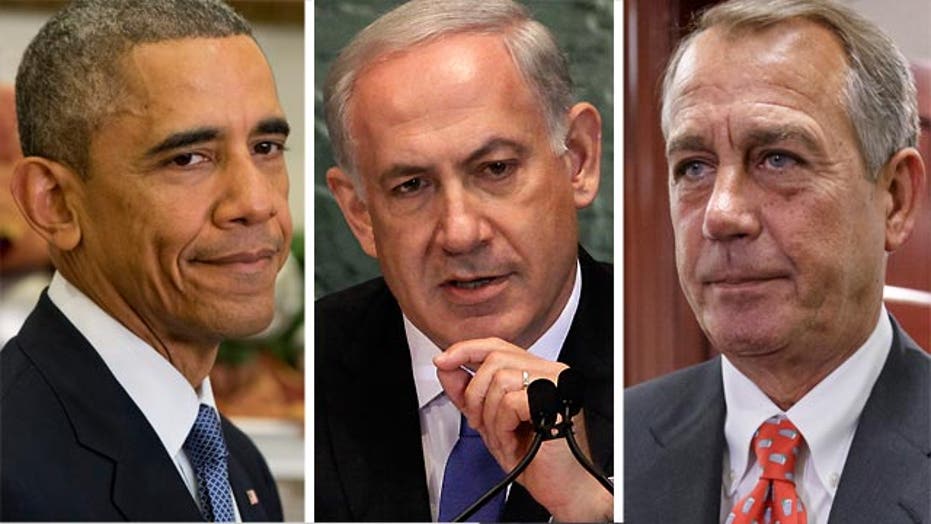 After Speaker Boehner snubs Obama in invitation to Netanyahu, president decides he won't meet with Israeli PM during March visit

The Obama administration reportedly is fuming over Israeli Prime Minister Benjamin Netanyahu’s plans to address Congress in March regarding the Iranian threat, with one unnamed official telling an Israeli newspaper he will pay “a price” for the snub.

House Speaker John Boehner invited Netanyahu -- and the Israeli leader accepted – without any involvement from the White House.

In public, White House Press Secretary Josh Earnest politely describes this as a “departure” from protocol. He also says the president will not meet with Netanyahu when he visits in early March, but has attributed that decision only to a desire not to influence Israel’s upcoming elections.

But in private, Obama’s team is livid with the Israeli leader, according to Haaretz.

"We thought we've seen everything," a source identified as a senior American official was quoted as saying. "But Bibi managed to surprise even us. There are things you simply don't do.

“He spat in our face publicly and that's no way to behave. Netanyahu ought to remember that President Obama has a year and a half left to his presidency, and that there will be a price."

The anonymous quote was a throwback to when, last year, Atlantic magazine quoted another unnamed senior administration official calling Netanyahu a “chickenshit.”

Administration officials, including Earnest, did not deny the quote at the time, though the White House stressed the criticism did not reflect how the rest of the administration views Netanyahu.

On Friday, Earnest once again was asked about tensions with the Israeli government. Asked if the decision to speak to Congress was a slap at the Obama administration, he said, “I certainly didn’t interpret it that way.”

As for the decision for Obama not to meet with his Israeli counterpart, he stood by the earlier explanation.

“This administration goes to great lengths to ensure that we don’t give even the appearance of interfering or attempting to influence the outcome” of democratic elections abroad, he said.

Obama has threatened to veto such a bill, saying it could derail delicate talks over Iran’s nuclear program – and Netanyahu’s visit to Washington could give him an opportunity to further encourage sanctions legislation.

Haaretz reported that Israel’s ambassador already has been urging members of Congress to support the measures. The newspaper reported that Obama told Netanyahu to stop during a Jan. 12 phone call.

On Friday, Earnest acknowledged that Obama and Netanyahu have a “fundamental disagreement” about the diplomatic talks with Iran.

“He doesn’t share [the administration’s] view,” he said. But Earnest also said the “differences of opinion” do not undermine America’s commitment to Israel’s security.

As Obama officials often do, he described that commitment as “unshakable.”