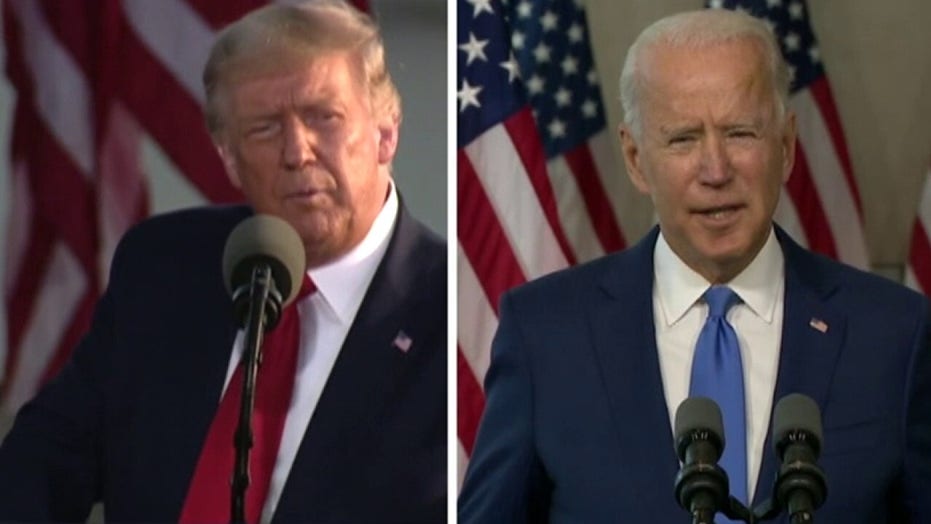 That’s the game plan for the first of three debates between Democratic presidential nominee Joe Biden and President Trump.

The topics for the Tuesday showdown -- which takes place at 9 p.m. ET live from Cleveland, Ohio -- are many of the biggest issues that have rocked the nation this year.

Divided into six 15-minute segments, the topics were chosen by the debate moderator, "Fox News Sunday" anchor Chris Wallace. They were announced last week by the nonpartisan Commission on Presidential Debates.

The issues are the fierce Supreme Court nomination battle, the worst pandemic to strike the globe in a century, a national economy flattened by coronavirus, the racial justice protests and violence that have flared in cities across the nation, and the integrity of the election. The latter is a crucial issue, considering the president for months has railed against expanded voting by mail, repeatedly charging that it would lead to a “rigged election.”

Wallace said the sixth topic for the debate will be the records of the current president and the former vice president.

Here's a brief look at the topics:

Trump announced Saturday that he’s nominating Amy Coney Barrett to the Supreme Court to fill the seat vacated by the death of Justice Ruth Bader Ginsburg. The conservative Barrett, 48, currently serves as a judge on the 7th Circuit U.S. Court of Appeals.

Trump and Biden are diametrically opposed -- with the president spotlighting his “constitutional duty” as he pushes for a quick confirmation ahead of  Election Day on Nov. 3. Biden has argued that if the confirmation is pushed through the GOP-controlled Senate before voters get to weigh in which party controls the White House and the Senate, “it would cause irreversible damage.”

The pandemic swept the nation in February and March. This past week the nation passed a grim milestone, as more than 200,000 COVID-19 related deaths have now been recorded. More than 7 million infections have been confirmed across the country.

Over the past six months, Biden has repeatedly criticized the president for initially downplaying the severity of the outbreak, and for botching the federal government’s response.

A week ago, at a speech in Wisconsin, Biden said, “Trump panicked. The virus was too big for him.”

The Democrat charged that “due to Donald Trump’s lies and incompetence, the past six months have seen the one of the greatest losses of life in American history.”

Trump and his campaign have repeatedly pushed back on such criticism, citing the administration's early effort to restrict air travel with China, where the pandemic originated

The Trump campaign recently tweeted that "the U.S. set a new record Saturday with more than 1 MILLION tests for coronavirus conducted in ONE day. President Trump's national testing strategy is achieving incredible results."

The pandemic and resulting lockdowns flattened the nation’s economy, causing the most devastating economic downturn and highest unemployment since The Great Depression nine decades ago.

.In a recent speech in Pittsburgh, Biden said Trump’s “tax breaks for the super wealthy, his reckless trade wars and his refusal to act to stop COVID-19 from spreading — even when he knew how dangerous the virus was — has led to the worst jobs crisis in close to a century.”

The president – pointing to the nation’s robust pre-pandemic economy, has repeatedly touted that “we built the greatest economy in the world. I'll do it a second time.”

The protests and violence

Protests for racial justice and police reforms have roiled many of the nation’s cities, with some turning violent.  The unrest was sparked by the May 26 death of George Floyd, a Black man in Minnesota who died after a white police officer put his knee on Floyd’s neck for nearly eight minutes.

As the protests escalated in June, Trump started emphasizing that “I am your president of law and order.” On Twitter, Trump has repeatedly tweeted “LAW AND ORDER." The president has presented himself as a "tough on crime" leader who’s protecting America’s suburbs.

But Biden blames Trump for the violence by fanning racial divides. "This president long ago forfeited any moral leadership in this country. … He can't stop the violence, because for years, he has fomented it," the challenger said.

“Does anyone believe there will be less violence in America if Donald Trump is re-elected?" Biden’s asked.

The president has spent six months railing against an increase in balloting by mail due to  concerns over in-person voting amid the pandemic. Trump has claimed – without offering concrete proof – that voting by mail will lead to a “rigged election.”

Trump also stoked controversy when ,twice last week he refused to commit to a peaceful transfer of power if he loses the election, telling reporters, “We’re going to have to see what happens.”

“I’ve been complaining very strongly about the ballots, and the ballots are a disaster," Trump said Wednesday. "We want to get rid of the ballots, and you’ll have a very peaceful — there won’t be a transfer, frankly. There will be a continuation.”

The comments drew condemnation from Democrats and pushback from top Republicans.

Biden on Friday called the controversy “a typical Trump distraction, trying to make everybody wonder whether or not the election will be legit.”

Biden has a much longer political resume.

He spent nearly four decades in the Senate, representing his home state of Delaware. And he served as vice president for eight years under President Barack Obama.

Trump, a New York businessman, billed himself as an outsider when he was elected in 2016. He’s served in the White House for three years and eight months.