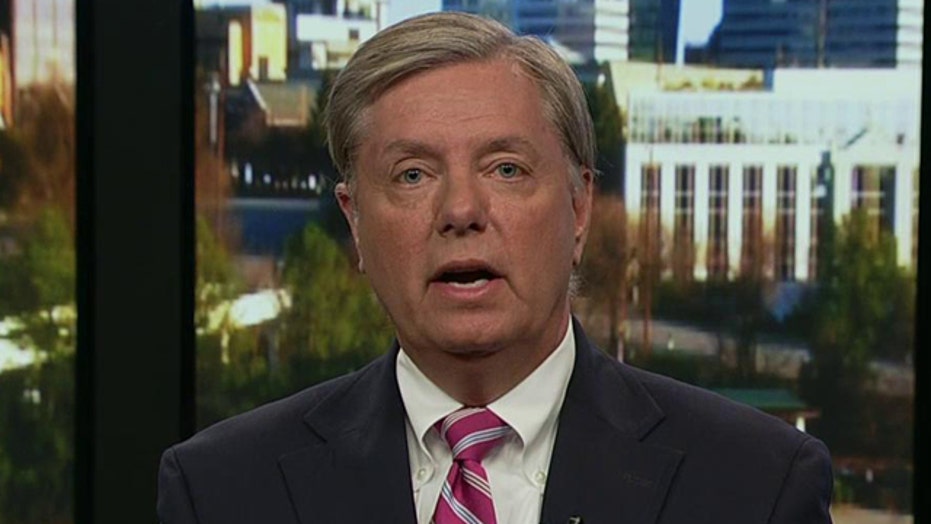 Sen. Graham: Pres. Obama has no vision on Iraq and Syria, must take the offensive against Islamic militant group or they will attack the US

Security officials, lawmakers and analysts are raising alarm that the Islamic State terrorist organization poses a growing threat to the West that must be confronted more directly, despite the U.S. military’s success this week in breaking the group’s siege of civilians on a mountain in northern Iraq.

According to U.S. intelligence officials, the Islamic State, also known as ISIS, has “pitched itself as the successor to Usama bin Laden.”

This has led to a struggle for dominance between the militant group and core Al Qaeda leadership in Pakistan. Officials confirm to Fox News that nine members of the Al Qaeda core leadership, though not senior members, have pledged support for IS – in a sign of growing competition between the two groups.

U.S. intelligence officials say some IS operatives have returned home and started cells, though they have not seen evidence yet the group has the ability to pull off a major, successful strike outside of their territory in Iraq and Syria.

But one intelligence official described the organization as “flush with money;” officials also said “almost all” the network’s leaders were in U.S. custody at one point.

The details lend credence to claims that the Islamic State is, or could soon be, an international threat.

“These people intend to attack us here at home and [President Obama] has no strategy to deal with that. That’s what the intelligence community is telling me and every other member of Congress,” Sen. Lindsey Graham, R-S.C., told Fox News, adding: “There is no force within the Middle East that has the capability to defeat or contain ISIS without American air power.”

He called for striking their bases in Syria and arming the Kurds in Iraq to hit them on both fronts.

“They are the hottest act in the jihadist world. They are getting stronger by the day,” Graham said.

Obama acknowledged the ongoing concerns about the Islamic State threat when he announced Thursday that U.S.-led airstrikes have helped most of the thousands of religious minorities who were trapped on a mountain by IS escape to safety. Obama said U.S. involvement will continue, as “the situation remains dire.”

The president said that would include airstrikes to protect American personnel, as well as humanitarian aid drops.

At the same time, Obama insists combat troops will not be put on the ground in Iraq as part of any American mission. The president, who distinguished himself on the campaign trail in part by highlighting his early opposition to the Iraq war, is loath to re-engage American forces in Iraq after withdrawing in 2011. Some lawmakers are reluctant, too, and are seeking a vote in Congress on the matter.

“There is still no American military solution to the larger crisis in Iraq," Kirby said. "The only lasting solution is for the Iraqis to come together and form an inclusive government that represents the legitimate interests of all Iraqi citizens."

That theory will be tested as Prime Minister Nouri al-Maliki has agreed to step down, clearing the way for new leadership. But some lawmakers still are urging a broader U.S. military campaign, out of concern that a new government in Baghdad is not the sole solution.

Graham claimed that Obama is holding back “because it would admit that his policies have failed.”

Retired Gen. Jack Keane, Fox News military analyst and former Army vice chief of staff, said he believes the organization is “a threat to the American security … and quite frankly, I really believe the president’s got to come clean with all of this and talk straight to the American people about why this is important and why we’re going to have to make a significant commitment.”

Defense Secretary Chuck Hagel has gone so far as to say the group poses a “threat to the civilized world.”

An unnerving photograph emerged this week on Twitter, of someone apparently holding up a picture of the IS flag, on a cell phone, in front of the White House. Secret Service confirmed they are aware of the image.

Concern about the Islamic State’s growth and global aspirations are striking a chord internationally as well.

The U.N. Security Council endorsed a resolution Friday expressing the “gravest concern” about the group’s control of territory in the Middle East.

The European Union and member nations also vowed more aid Friday for civilians and those fighting the Sunni insurgents in Iraq.