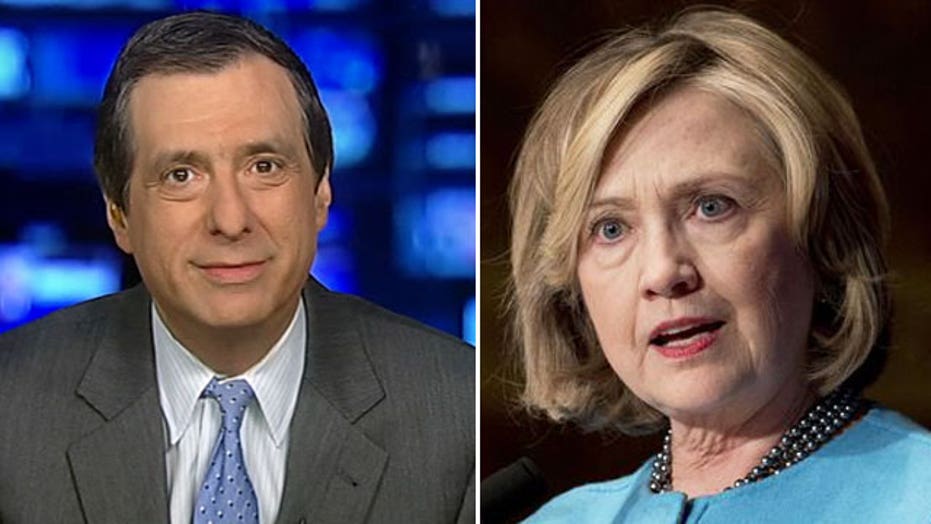 'Media Buzz' host on how the press has covered Hillary Clinton

The Clintonian pushback against the media is under way.

And let’s face it, we’re a big target.

Now that Hillary has laid down her “convenience” defense after avoiding the press for a week, her allies are starting to assail the media establishment that disclosed and is driving this controversy.

Got that? Journalists are just exhibiting their weirdness, like a preference for whips and chains.

And for good measure, the Rhode Island lawmaker added: “You guys have lost your minds on this.”

No one can defend everything that happens in a media frenzy. The new Time cover, which appears to put devil’s horns on Hillary’s silhouette, is only the latest example.

Clinton’s exclusive use of private e-mail as secretary of State is absolutely a legitimate story. Does Whitehouse believe the Times, Washington Post, network newscasts and all the cable news channels share the same fetish?

It’s also true that the media can utterly obsess about fleeting controversies that later don’t seem hugely important. Look back at 2012: There was the Mitt Romney aide who talked about Etch-a-Sketch; a Democrat’s swipe at Ann Romney for never working a day in her life, Newt’s attacks on the press, and on and on. How much time did the media spend in 2008 on Joe the Plumber?

But how a presidential candidate handled her communications as the nation’s top diplomat seems kind of relevant, even if James Carville is dismissing the whole thing as “right-wing talking points” embraced by the press.

Still, you can see the emerging line of attack. Salon’s Elias Isquith, acknowledging that he was a youngster during the Whitewater furor of the 1990s, is appalled by the media’s treatment of Hillary:

“I must admit something. Despite finding her views on economic and foreign policy to be lacking, when it comes to her antipathy for the media, I can’t blame Clinton. Not one tiny bit…

Well, the fact that he doesn’t hold Hillary accountable “one little bit” for a secretive style that creates media skepticism is, I suppose, a sign of his inexperience. Hillary’s aides used to write her memos when she was first lady, urging her to find better ways to deal with the press. (Said one: "Hillary is comfortable with local reporters and enjoys speaking with them. This will help us get around her aversion to the national Washington media and serve to counter the tone of the national media.")

Maybe there is too much gusto over this story, but anyone who doesn’t think the media are a major problem for Hillary doesn’t understand how the process works. And they will be a major obstacle for Jeb, Rand and other Republican candidates as well.

Part of the craziness of running for the White House is figuring out how to deal with a cantankerous, relentless and sometimes superficial press corps. Because it doesn’t get any easier when you’re actually president. And voters have come to view the daily combat as a test of the candidate’s leadership and communications skills.

The press is divided, meanwhile, on the fallout for Hillary’s 2016 chances. The New York Times said Thursday that Democrats are totally behind her:

“They shrug off questions about Hillary Rodham Clinton’s email habits. They roll with the attacks on her family’s foundation, the big checks from foreign governments, the torpid response of her not-yet-campaign.

“They have little choice: As Mrs. Clinton prepares to begin her second presidential campaign amid a froth of criticism and outrage, Democrats are not just Ready for Hillary — as supporters named one pro-Clinton “super PAC” — they are desperate for her…

“Mrs. Clinton, many Democrats say, is simply too big to fail.”

Got that? But the Washington Post said Thursday that Democrats are totally nervous:

“Senior Democrats are increasingly worried that Hillary Rodham Clinton is not ready to run for president, fearing that the clumsy and insular handling of the nine-day fracas over her private e-mails was a warning sign about the campaign expected to launch next month…

“In interviews Wednesday with The Washington Post, current and former Democratic officeholders and operatives from across the country raised serious questions about her and her political team’s strength and readiness for a 2016 presidential campaign.”

So which is it?

Obviously the party can be behind Hillary and worried about Hillary simultaneously. How she deals with the media in the coming weeks and months may either allay those fears or exacerbate them.