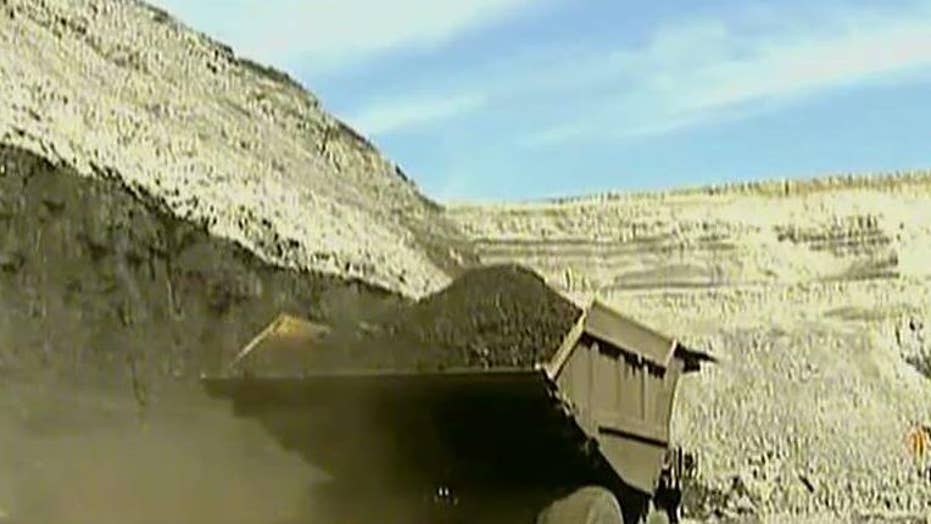 How will Trump's energy plan affect the coal industry?

America’s energy policy is about to change – big league.

Unlike President Obama – who prioritized energy regulations and handouts as part of an incentive system to curb global warming – President-elect Donald Trump says he will focus instead on making America energy independent.

How significantly U.S. energy policies will change remains to be seen. But several campaign promises provide a roadmap:

In the alternative energy industry, companies are hoping Trump sees the economic benefit.

“We would just like the Trump administration to understand that wind is big. It's of scale, it's cost competitive, it's clean and renewable,” said Steve Lockhart, of TCI Composites, a wind turbine blade manufacturer in Iowa. “The wind industry employs 88,000 people today, 21,000 in the manufacturing sector, over 500 factories in forty-three states, so there is tremendous employment that is generated from this industry.”

Ten states now get more than 30 percent of their electricity from renewables, making it unlikely Trump would try to interfere in their power generation. States also have taken the lead by requiring utilities to get an increasing amount of their power from renewables, including Texas, where Energy Secretary nominee Rick Perry encouraged wind energy.

Rob Bishop, R-Utah, chairman of the House Natural Resources Committee, says it will be up to Trump to help rewrite America’s energy blueprint – in part, he hopes, by opening up federal lands to more development. Trump also will have to fight or negotiate with Democrats and the environmental lobby to navigate changes in the Endangered Species Act and National Environmental Protection Act to allow for more drilling.

“I am excited and I am nervous at the same time because it's not going to be as easy as some people think,” Bishop said.

One of the more difficult efforts will be reviving the coal industry as Trump has pledged. Coal towns in key states like Pennsylvania and Ohio came out big for the president-elect. The problem is not only have many utilities moved on -- signing long-term energy contracts with new providers – but coal is losing market share to natural gas, which is cleaner and cheaper.

Nevertheless, in the small mining town of Hotchkiss, Colo., people are hopeful.

“It is not just the coal itself, it is the downstream value to our economy, to our people to our community,” said Mayor Wendell Koontz.

Koontz used to work at the Oxbow mine. It closed earlier this year along with another nearby site. Koontz saw 1,200 coal jobs disappear in one year, leaving dozens of businesses in the town of 900 empty.

Eight years ago, coal provided half of America’s electricity. Today, it is 31 percent and falling.

Asked if this trend is market-driven or tied to politics, Mike Ludlow, president of Oxbow mining, said: “The shut-down of a lot of coal plants and the loss of market is due to regulation that restricted emissions from coal fired plants.”

Surveying what’s left of the huge mine, he said, “It is a combination of that and cheap natural gas.”