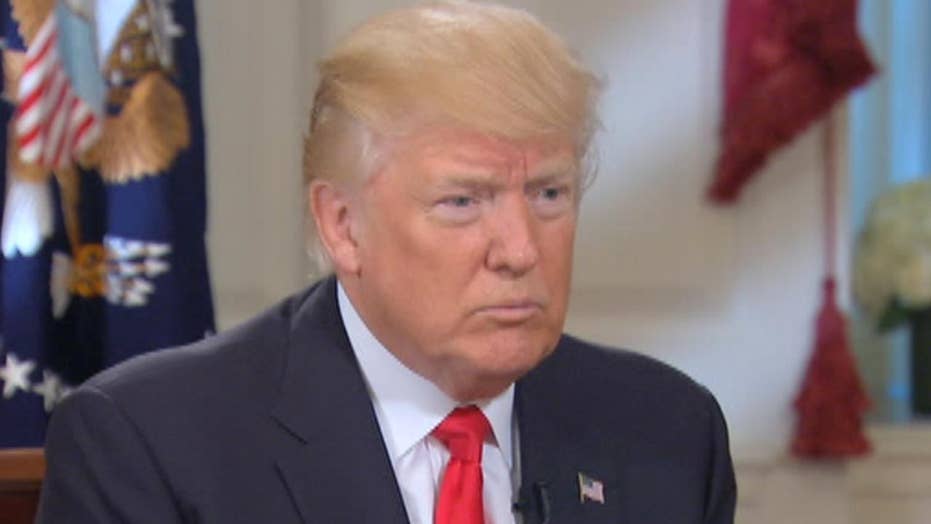 Trump on how GOP has handled health care: I'm disappointed

President Trump told Fox News’ Martha MacCallum on Friday that he’s “disappointed” with how congressional Republicans have handled big legislation on health care and other issues, as he reflected on his first 100 days in office.

At the same time, Trump rejected the notion that he hasn’t had major legislative victories so far – and said he understands the challenge for lawmakers trying to navigate what he called a “very tough system.”

WATCH THE FULL INTERVIEW WITH TRUMP ON ‘THE FIRST 100 DAYS’ FRIDAY AT 7 P.M. ET ON FOX NEWS CHANNEL

Trump sat down with MacCallum, anchor of “The First 100 Days,” on day 99 of his presidency for a wide-ranging interview.

The interview came as Congress approved a stopgap spending bill to avert a government shutdown this week – but also pushed off a possible vote on a new health care package until next week at the earliest.

House Speaker Paul Ryan was forced to pull initial legislation to replace ObamaCare from the floor last month after being unable to corral the votes, in large part because of opposition from House conservatives. Many of those lawmakers have gotten on board with a new version, but GOP leaders are still courting moderates.

“I’m disappointed that it doesn’t go quicker,” Trump told Fox News. “I like them a lot. I have great relationships – don’t forget most of them I didn’t even know. … But many of them like the Freedom Caucus came and I see them all the time, ‘we love our president, we’re doing this for our president.’ You look at that, you look at the moderates, it’s the same thing.”

He said, however, that it’s “really wrong” to claim he hasn’t had major legislation.

He also reacted to the developing controversy behind his fired national security adviser Michael Flynn, whom House lawmakers say may have violated policies against taking foreign money without permission after he left the Obama administration. Trump suggested it was the Obama administration, not his transition team, that erred in vetting him.