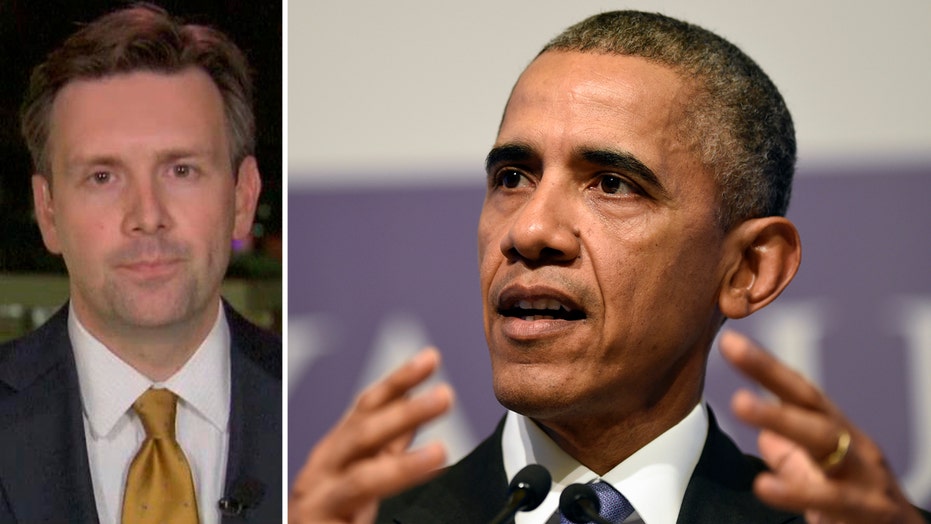 Words and their meaning continued to dog the White House on Wednesday.

Secretary of State John Kerry found himself on the defensive for saying the terrorists who attacked Charlie Hebdo had a "rationale," and by late Wednesday was walking back his remarks.

This came on the heels of President Obama labeling Friday's Paris massacre a "setback."

Obama then compounded the backlash by slamming Republicans raising concerns about the screening process for Syrian refugees.

"Apparently, they're scared of widows and orphans coming into the United States of America as part of our tradition of compassion," Obama said Wednesday, in the Philippines. "...  They've been playing on fear in order to try to score political points or to advance their campaigns."

While Obama did not mention a candidate by name, it was likely a reference to New Jersey Gov. Chris Christie saying not even "orphans under 5" should be allowed right now.

Christie fired back, saying in an interview with Fox News that "the American people need to be protected first." He, like other Republican lawmakers, questioned the reliability of the current vetting process.

Kerry had discussed the January Charlie Hebdo attack -- an Al Qaeda affiliate attack against employees at a satirical publication that had published Prophet Muhammad cartoons -- during remarks on Tuesday to U.S. Embassy employees in Paris. He at first suggested there was "legitimacy" to those attacks but then corrected himself and said they had a "rationale."

He said: "There's something different about what happened from Charlie Hebdo, and I think everybody would feel that. There was a sort of particularized focus and perhaps even a legitimacy in terms of -- not a legitimacy, but a rationale that you could attach yourself to somehow and say, okay, they're really angry because of this and that. This Friday was absolutely indiscriminate. It wasn't to aggrieve one particular sense of wrong. It was to terrorize people."

But on Wednesday, Kerry appeared to walk back the comments, saying:

"Now, let me make my point as clearly as I can:  There are no grounds of history - religion, ideology, psychology, politics, economic disadvantage, or personal ambition - that justify the slaughter of unarmed civilians, the bombing of public places, or indiscriminate violence towards innocent men, women, and children. And such atrocities can never be rationalized, and we can never allow them to be rationalized. There's no excuse."

The Obama administration mostly has stood by officials' comments on the attack and its aftermath. Asked about Obama and Kerry's comments during a contentious interview on Fox News, White House Press Secretary Josh Earnest suggested too much attention was being paid to officials' words.

"I would encourage you to spend just as much time focusing on the president's actions as you do his words," Earnest said on "Fox & Friends."

Earnest noted that Obama, speaking in Turkey on Monday, also called the attacks "sickening." Plus he said Obama called the French president to offer support -- while strategizing with his own security advisers on the U.S. response. Earnest said the president is consulting on "what sort of military steps we could take to ramp up our efforts inside of Syria and make sure we can support our French allies."