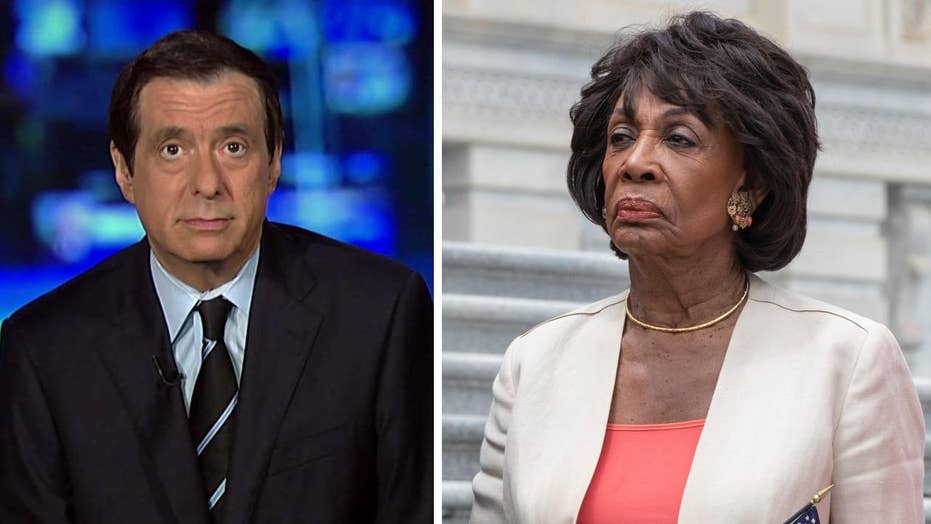 Kurtz: Why personal harassment of pols is just plain wrong

'MediaBuzz' host Howard Kurtz weighs in on the targeting and harassment of Trump aides simply because they are part of the Trump administration, and why people such as Maxine Waters are pouring fuel on the fire of bad behavior.

We are being buried under a tsunami of toxicity.

Too many people are justifying bad behavior by decrying the actions of the Trump administration—and many of them would cry foul if the folks on their side received the same mistreatment.

As I learned when I slammed a Virginia restaurant's refusal to serve Sarah Sanders over the weekend, there is an awful lot of anger and even hatred out there, and in an era of social media, it immediately bubbles to the surface. Restraint seems to have melted away since President Trump's policy of family separations at the border, which he has since reversed, came to dominate the news coverage.

Pouring fuel on the fire is Maxine Waters, the left-wing Democratic congresswoman, who essentially called for liberals to go after Trump Cabinet members as they go about their lives. This strikes me as beyond irresponsible, and she didn't even use coded language.

That's right—a member of Congress actually called for administration officials to be harassed. It's not hard to imagine someone getting roughed up, or worse, in the process. How is this not a step toward mob rule?

Yet it's not hard to imagine Waters and her allies spewing outrage if Eric Holder or Valerie Jarrett or David Axelrod had been refused service or personally harassed by Obama-haters.

When the owner of the Red Hen in Lexington, Va. asked Sanders and her friends to leave simply because she works for the White House, CNN contributor Ana Navarro said: "You make choices in life. And there is a cost to being an accomplice to this cruel, deceitful administration."

And MSNBC contributor and Washington Post columnist Jennifer Rubin wrote that it is "both natural and appropriate for decent human beings to shame and shun the practitioners" of Trump's immigration policy.

Trump jumped into the fray yesterday, tweeting: "The Red Hen Restaurant should focus more on cleaning its filthy canopies, doors and windows (badly needs a paint job) rather than refusing to serve a fine person like Sarah Huckabee Sanders. I always had a rule, if a restaurant is dirty on the outside, it is dirty on the inside!"

The president also riled things up on the immigration front, even as the media shift their focus to efforts to reunite more than 2,000 migrant children scattered across the country with their parents.

"We cannot allow all of these people to invade our Country," Trump tweeted. "When somebody comes in, we must immediately, with no Judges or Court Cases, bring them back from where they came."

In other words, the president is proposing to toss out key due process protections, which would run up against a number of Supreme Court decisions. But I doubt he really believes he can achieve that. Having been on the defensive over family separations, I think he's trying to get liberals to overreact and paint them as soft on illegal immigration for the midterms.

Still, it's one thing to battle over policy, and the reports of children being held in cages has made this perhaps the most emotional battle between Trump and his detractors in the political and media worlds. It's another to employ the Red Hen doctrine and discriminate against officials in their personal lives.

By the way, D.C., Seattle and the Virgin Islands have laws against refusing service to people based on their political affiliation or ideology. And while the Supreme Court this month ruled in favor of a baker who invoked religious beliefs in declining to provide food for a gay wedding, the decision was on the narrow grounds of how a Colorado civil rights panel handled the claim.

The Sanders incident is hardly unique. Shouting protesters gathered at the townhouse of Homeland Security chief Kirstjen Nielsen, and also forced her to make an early departure from a Mexican restaurant. White House aide Stephen Miller was confronted and called a "fascist" at another restaurant. Local protesters screamed at Florida Attorney General Pam Bondi at a movie screening—ironically, a Mr. Rogers documentary—and she had to be escorted out.

It's getting out of control.

Here, in a nutshell, is the debate between right and left.

David Harasanyi in The Federalist:

"You're no budding MLK. No matter what you think of Trump, you're still an insufferable a–h-le. You're a member of a tribalist, blindered mob, imbued with a false sense of certitude that allows you [to] justify incivility. That is to say, you're like a Twitter troll made real."

Josh Marshall, founder of Talking Points Memo, says we may disagree "when it comes to protests, mean words, civil disobedience, boycotts, public shunning." But, he says, "these are entirely legitimate tools of political action, civic action. Many calls for civility are simply calls for unilateral disarmament from those protesting injustices and abuses of power."

There's nothing wrong with gold old-fashioned American protest. But what's happening now is quickly sliding down a slippery slope toward harassment, denial of service and abusive behavior. It's quite revealing that this is exploding during Donald Trump's presidency—when some in the media and politics have justified to themselves that it's fine to use different standards against him.