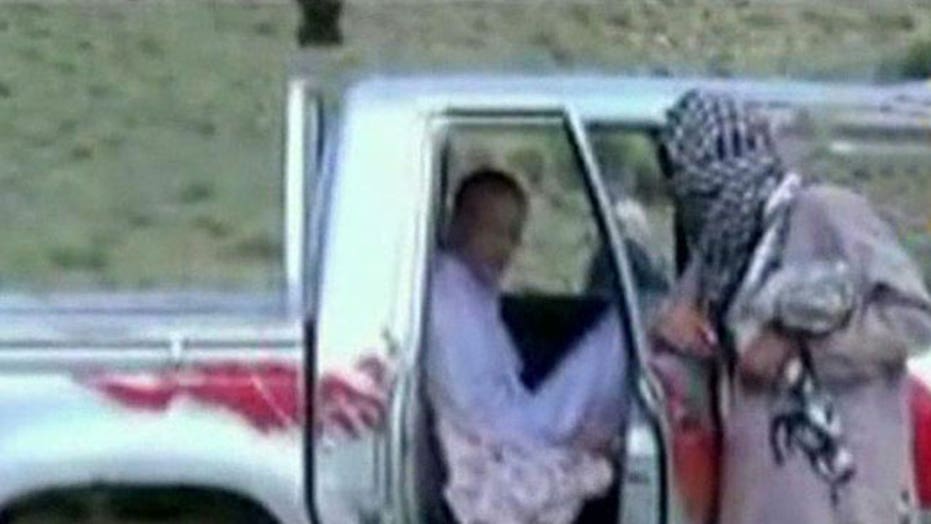 The Taliban have released a video showing the handover of Sgt. Bowe Bergdahl into U.S. custody over the weekend.

The video was emailed to media outlets Wednesday. Pentagon spokesman Rear Adm. John Kirby said that the Defense Department was reviewing the video, but had "no reason to doubt [its] authenticity."

"Regardless," Rear Adm. Kirby said, "we know the transfer was peaceful and successful, and our focus remains on getting Sgt. Bergdahl the care he needs."

The video opens by showing Bergdahl in traditional Afghan clothing sitting in a white pickup truck parked on a hillside somewhere in eastern Afghanistan. More than a dozen Taliban fighters with machine guns stand around the truck and on the hillside.

Bergdahl, who is clean shaven and has a shaved head in the video, is seen blinking frequently as he looks at and listens to his captors.

The video is narrated by a Taliban militant, who at one point says, "We told them there are 18 armed fighters and the Americans said that's all right."

A Black Hawk helicopter then lands and two Taliban fighters, one carrying a white flag, lead Bergdahl half way. He is greeted and taken by three Western-looking men in civilian clothing to the helicopter, where soldiers in Army uniforms are waiting.

According to the video's narrator, the handover took place around 4 p.m. Saturday in the area of Bati in Ali Sher district of eastern Khost province. As the helicopter approaches, one of the Taliban men gets closer to Bergdahl and is heard speaking in Pashto, one of two main Afghan languages.

"Don't come back to Afghanistan," the man tells Bergdahl. "You won't make it out alive next time," he adds as some of the others are heard laughing.

Just before the helicopter lands, a group of Taliban near the pickup shout: "Long life to Mujahedeen," or holy warriors as the Taliban call themselves.

A Taliban statement, also distributed to media, quoted their leader Mullah Mohammad Omar describing the release of the five Taliban officials from Guantanamo as a significant achievement for the movement.

As the video shows the helicopter taking off, the message "Don' [sic] come back to Afghanistan" pops up on the screen.

The video also showed the arrival in Qatar of the five Taliban militants released from Guantanamo Bay in exchange for Bergdahl's freedom. The video shows the men being greeted with embraces as a Taliban song plays in the background.

The aftermath of Bergdahl's release has been consumed by controversy, with many service members claiming that Bergdahl deserted prior to his capture in 2009. Members of Congress have alleged that the administration broke the law by not giving them 30 days notice of the impending release of the militants from Guantanamo Bay.