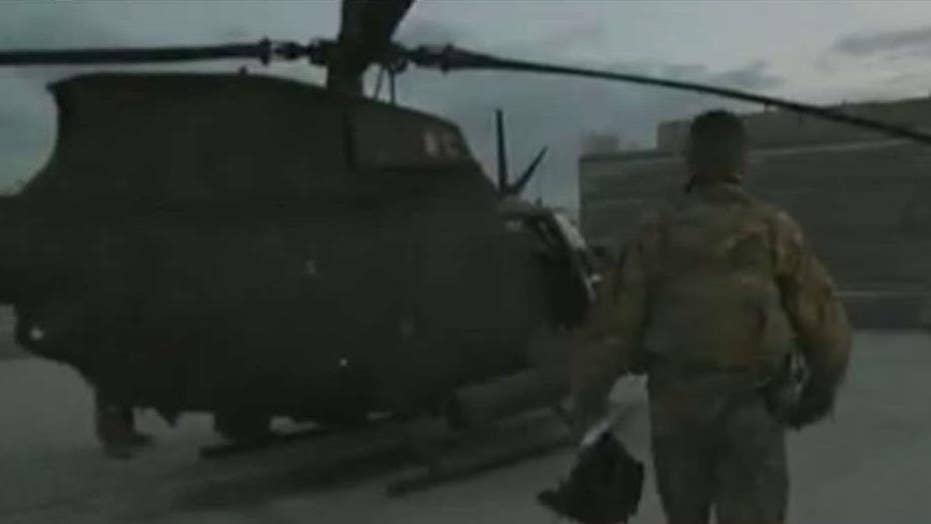 New details on bomb blast that killed six US troops

Deadliest day in Afghanistan for U.S. in three years

The deadly attack on American NATO forces in Afghanistan on Monday was a grim reminder of the deteriorating security situation in the warzone at a time when the administration is trying to draw down the troop presence by thousands more before President Obama leaves office.

Obama this past fall was compelled to slow the pace of that withdrawal amid security concerns, and now plans to leave at least 5,500 troops on the ground at the close of his presidency.

But grim warnings have come at a steady clip since.

A Pentagon report last week suggested there will be no winter-time lull in fighting.

“Complex and high-profile attacks will likely continue through the winter and into the next fighting season,” the report said.

The same report warned the Islamic State offshoot in Afghanistan is fighting the Taliban for territory, which could lead to more violence next year.

Meanwhile, Monday’s attack – for which the Taliban claimed responsibility -- came as Taliban fighters and government forces battled for control of a strategic district in the southern province of Helmand after it was overrun by insurgents, delivering a serious blow to the government's forces.

The developments are likely to keep congressional scrutiny trained on Obama’s withdrawal timetable, which has proved to be flexible before.

Asked about the latest violence and its implications for U.S. policy, a spokesman on the House Armed Services Committee said Tuesday that Chairman Mac Thornberry, R-Texas, “is not in favor of arbitrary timetables or arbitrary troop caps” and “believes the strategy should reflect the situation on the ground.”

Rep. Duncan Hunter, R-Calif., who serves on that committee, supported Obama’s decision to slow the withdrawal pace but said the president “has to listen to his military advisers” next year.

“I think things escalate beyond next year,” Hunter warned, noting that ISIS could grow its presence there as it is squeezed in Iraq and Syria.

In October, Obama granted requests from the Afghanistan government to keep more troops in the country next year. He announced the U.S. will keep its 9,800-troop force through most of 2016, and draw down to 5,500 late in the year or in early 2017. The president originally planned to leave only an embassy-based presence in late 2016.

The recent Defense Department report said violence in Afghanistan overall is on the rise and the security situation has worsened since June, with more effective attacks by insurgents and increased casualties among Afghan security forces.

In a pointed warning, the DOD said advances by the Islamic State of Iraq and the Levant (ISIL) – Khorasan Province (IS-KP) in particular could stoke “increased violence” with other extremist groups in 2016.

IS-KP “has progressed from its initial exploratory phase to a point where they are openly fighting the Taliban for the establishment of a safe haven, and are becoming more operationally active,” the report said. The report said the Afghan government is “particularly concerned” about the rise of IS-KP and sees this as a “serious looming threat in the region.”

The report also said the Taliban-led insurgency “has likely been emboldened” by the U.S.-led coalition's transition this year from direct combat operations to a train-and-advise role.

In the most recent deadly bombing, a suicide attacker rammed an explosives-laden motorcycle into a joint NATO-Afghan patrol Monday, killing six American troops.

It was the deadliest attack on international forces since August. The Taliban claimed responsibility.

Among the dead was Joseph Lemm, a 15-year-old veteran of the New York Police Department.

In a statement, Defense Secretary Ash Carter said the attack is “a painful reminder of the dangers our troops face every day in Afghanistan.”

The White House extended thoughts and prayers to the victims and their families.

“The United States condemns this cowardly attack on members of the U.S. and Afghan forces, and we remain committed to supporting the Afghan people and their government,” Press Secretary Josh Earnest said in a statement. “We will continue to work together to promote peace and stability in Afghanistan, just as we will not relent in our mission to counter the threat of terrorism that plagues the region.”

FoxNews.com's Judson Berger and The Associated Press contributed to this report.