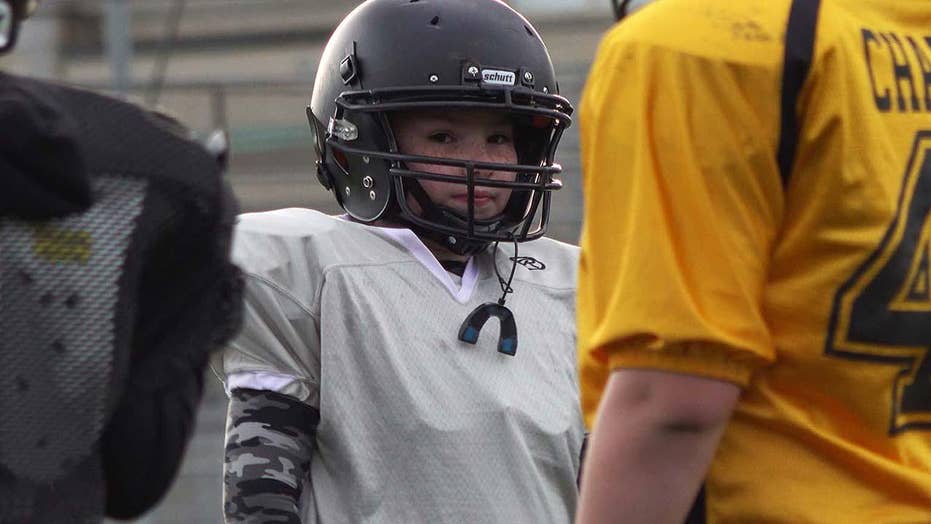 Lawmakers argue that the ban would be for kids' safety, citing research on brain trauma. Some parents and coaches are calling it government overreach.

At their spring league practice, parents of Lynn Silverbacks players were calling foul on the bill.

"Parents should be able to choose," said Kristin Kidney, watching the team practice. "Why ban a sport that he's been playing since he was 5 years old?"

In California, Illinois, Maine, Maryland, New York, and New Jersey, state legislators have introduced similar bills. Canada will begin enforcing a national ban on tackling for children under 12 in 2022.

Under the Massachusetts proposal, any school or league caught violating the ban could be slapped with a $2,000 fine — $10,000 if a player is seriously injured.

On a gray Saturday morning inside a chilly school gymnasium, Taylor explained to roughly 70 coaches in the New England Youth Tackle Football organization what concussion symptoms look like. He opposes the ban, arguing that the game has changed drastically over the years.

"Football has never been safer," Taylor said. "It's through proper education of coaches, with proper training like clinics just like today. We are taking the head out of football and teaching proper technique."

One researcher at Boston University who studies trauma to athletes' brains argues that is not enough.

"I don't think it makes enough difference," said Dr. Robert Cantu, clinical professor of neurosurgery and neurology at BU. "Even if you don't hit with the head, you're bringing somebody to the ground. It's a pretty violent act. There's going to be head trauma as a byproduct of it. I'm simply saying let's wait until you get to high school before you start taking that trauma."

Cantu points to youth hockey, in which full-body checking has been essentially banned nationwide for players 12 and under. In most soccer programs, heading has been banned until age 11.

He said their research has revealed troubling risks for young athletes who take repeated blows.

"If you start playing tackle football under the age of 12, you have about double the chance of developing later-life cognitive behavioral or mood problems," Cantu said.

Joel Machado, president of New England Youth Tackle Football, is angry about the ban proposal, arguing that the decision is being taken out of families' hands.

BRETT FAVRE HAS MEMORY ISSUES, MAY HAVE HAD 'THOUSANDS' OF CONCUSSIONS

"As a parent, you have to be concerned because he's taking my rights from deciding what sport my son should participate in," Machado said.

He argues that if kids stick to flag football until they're older to start tackling, it could be even more dangerous because hormone-filled players would be more aggressive, not having learned the proper methods of tackling.

Cantu responded that there isn't any proof that waiting to tackle would put young athletes at a disadvantage as they enter their high school and college careers.

"There's absolutely no evidence, there's no peer-reviewed paper ever been written to substantiate one bit of that," Cantu said. "You can learn to do things properly at any age."

One argument against the bill is that helmet and padding technology has improved drastically, minimizing the risk for brain trauma.  (ROB DIRIENZO / Fox News)

At the Boston University School of Medicine, Cantu and his colleagues examine the brains of dead athletes for signs of CTE, the only way to know for sure. One of the brains in their bank is of former Chicago Bears safety Dave Duerson, who committed suicide in 2011.

"My father specifically wrote out a note saying please give my brain to the NFL brain bank," his son Tregg Duerson said.

Wishing to carry on his dad's legacy, Tregg is now pushing for the Illinois bill to ban youth tackle football.

"The questions around the impact of CTE has really evolved to, 'Well, how many years did your father play football? rather than, 'How many concussions did he have?'" Duerson said.

Cantu said their research is now suggesting that full-on concussions are not the only factor in the risk for CTE, but any repetitive blows to the head over time.

"What we're learning is it's really not concussions that are the issue," Cantu said. "It's the repetitive subconcussive head trauma. So you don't have to have hits at a level that produce symptoms immediately to actually wind up producing brain damage."

If the tackle ban passes in Massachusetts, Machado thinks kids will lose interest in the sport and it will be a blow to his community.

"It will be devastating," Machado said. "Aside from everything that football brings to the table, to my community, it's a matter of socioeconomics."