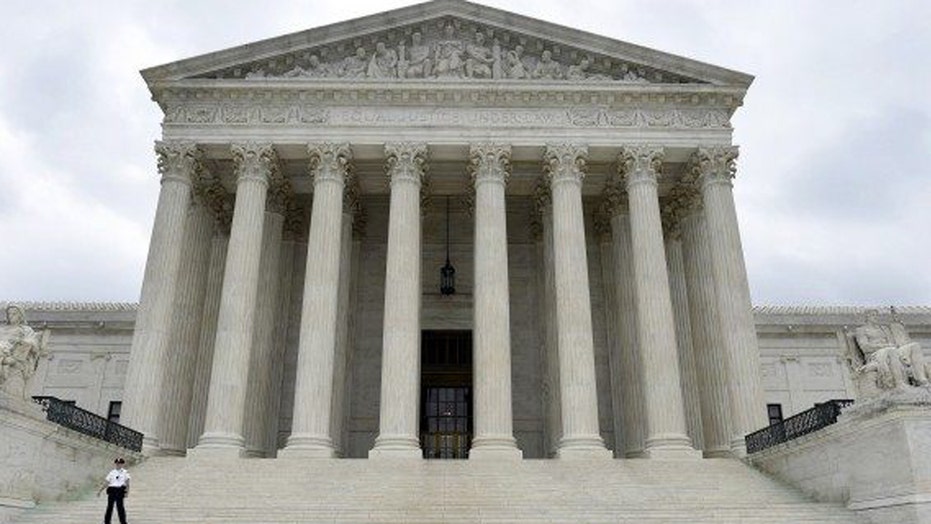 The Supreme Court on Monday is poised to once again enter the fray on the abortion issue, an already divisive subject complicated by election-year politics and a split bench that may lack the votes to rule definitively.

The high court will wrap up its work for the summer by issuing a judgment on how far Texas can go to regulate abortion clinics in the state, and whether those provisions have the effect of limiting first-trimester abortions guaranteed by the landmark Roe v. Wade ruling. Texas reproductive clinics are asking the justices to keep their facilities open in the face of the state restriction.

Activists on both sides of the issue are expected to rally outside the court when the ruling is announced.

A 4-4 tie would sustain the lower court's ruling, meaning a default victory for Texas, and likely for similar laws in other nearby states, including Louisiana and Mississippi. But no legal precedent would be established, leaving continued uncertainty nationwide. The Supreme Court could later hear new arguments in the case, when a ninth justice has been sworn in to replace the late Antonin Scalia.

Tied rulings are becoming common for the post-Scalia court. The justices last week ruled 4-4 on a closely watched immigration case, dealing a setback to President Obama's executive action to shield millions of undocumented immigrants from deportation.

Scalia, who died in February, was perhaps the most outspoken of the current justices in regards to the abortion issue. A year ago, he, along with three other conservative members of the court, opposed issuing an order delaying enforcement of the Texas law while the case was being appealed.

The four liberal justices -- along with swing vote Justice Anthony Kennedy -- gave a temporary victory to the clinics in that case, allowing them to remain fully operational. It suggests there may now be five votes to ultimately strike down the Texas restrictions.

The oral arguments from March were especially tense, though. Kennedy asked tough questions of both sides and did not tip his hand on how he would ultimately vote.

If upheld, all clinics performing the abortion procedure in the state must operate as certified "ambulatory surgical centers" regulated under the same standards as hospitals. Another challenged provision would force doctors performing abortions to first obtain admitting privileges at a nearby hospital.

Lawmakers in the state's Republican-majority legislature have said the regulations contained in the 2013 law -- known as H.B. 2 -- would improve patient care and safety.

Abortion rights groups counter that the law is designed to make it nearly impossible to operate an abortion clinic in Texas. Only nine or 10 such health centers would qualify to stay open, and large areas west and south of San Antonio would have no full-time abortion providers.

The Center for Reproductive Rights had sued Texas, on behalf of a coalition of abortion clinics.

A federal judge initially concluded the "ambulatory surgical centers" requirement was unconstitutional and imposed an injunction. But a federal appeal court ruled largely in favor of Texas. The clinics then asked the justices to finally decide the matter.

"There was a lot of talk at arguments about what impact this has on clinics," said Thomas Dupree, a former top Justice Department officials in the George W. Bush administration, now a private appellate attorney. "So it could be the court is working behind the scenes to fashion some sort of compromise resolution where they basically punt, at least for the time being on the constitutional issue, and send the case back for more evidence gathering" by the lower courts.

But some court watchers on the progressive side worry what a tie vote would mean in the short term.

"It will definitely be a dramatic example of the problems of having a mere eight-justice court," said Elizabeth Wydra, president of the Constitutional Accountability Center. "And if the court splits 4-4 they will leave in place a difference of opinion, in the circuits [courts] below. That means women would enjoy their fundamental rights differently based on the state in which they live and this is not how our Constitution works."

A Fox News poll from August revealed an even public split on the abortion issue, which has inevitably become enmeshed in presidential election-year politics.

Among registered voters, 47 percent surveyed favor abortion rights or consider themselves "pro-choice" while 46 percent oppose the procedure or are "pro-life."

The number of abortions is at the lowest level since the Roe v. Wade decision, according to research from the Guttmacher Institute. The number remained steady at about 1.1 million reported procedures in the year 2011, down about 25 percent since the all-time high in 1990. Since the 1973 Roe v. Wade decision, about 53 million legal induced abortions were performed through 2011.

What the Supreme Court decides Monday could ripple across other states and in Washington. The court has not ruled substantively on the abortion issue since 1992, when the justices said any such law could not place an "undue burden" on women's access to abortions. The swing vote, as in previous cases, came from Kennedy. It appears inevitable his vote will again prove crucial in the Texas dispute.

This appeal could effectively be set aside as a political and legal issue in 2016 if the high court is unable to muster a binding majority. By next spring, a new president, and possibly a new member of the high court would then reset the abortion debate in a post-Scalia era.