Adult film star Stormy Daniels said Wednesday that she was "proud" of President Trump's one-time personal attorney, Michael Cohen, for "beginning to tell the truth" about his actions in public testimony before the House Oversight Committee.

Daniels received a $130,000 payment from Cohen days before the 2016 presidential election, supposedly in order to keep quiet about an alleged sexual encounter with Trump in 2006. Federal prosecutors in New York have said then-candidate Trump directed Cohen to arrange payments to Daniels and another of Trump's alleged lovers, former Playboy model Karen McDougal, in violation of federal campaign finance law.

"I can hear the pain and regret you feel for betraying your family and your country," Daniels said in a statement that addressed Cohen directly. "My heart goes out to you and your family."

"Do you believe now that when you and the president called me a liar, when you were his attorney and you insulted me, threatened to bankrupt me and worse, that you put me and my family in danger?" Daniels said. "I remember the fear you feel. I still feel it."

In his testimony, Cohen told lawmakers that he acted out of "blind loyalty" to Trump and said he was presenting the committee with a copy of checks Trump wrote from his personal bank account in March 2017 and August 2017 -- after he was sworn in as president -- to reimburse Cohen for the hush money payments. Trump's current attorney, former New York City Mayor Rudolph Giuliani, has said Cohen was repaid through a retainer agreement.

Cohen also said that Trump asked him in February 2018 to say that the president "wasn't knowledgeable" about the payments to Daniels and McDougal. However, prosecutors say the Trump Organization paid Cohen in monthly installments to reimburse him for the Daniels payment and that Cohen used "sham" invoices to try to conceal the true nature of the payments.

Cohen is scheduled to begin a three-year prison term in May after he pled guilty to federal campaign finance violations, lying to Congress and other charges.

"Thank you for having the courage, at long last, to begin to tell the truth," Daniels concluded. "I hope that somebody soon your family and mine can both leave this nightmare behind." 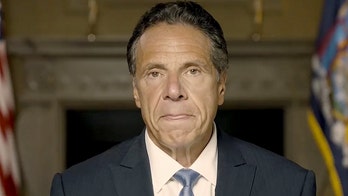