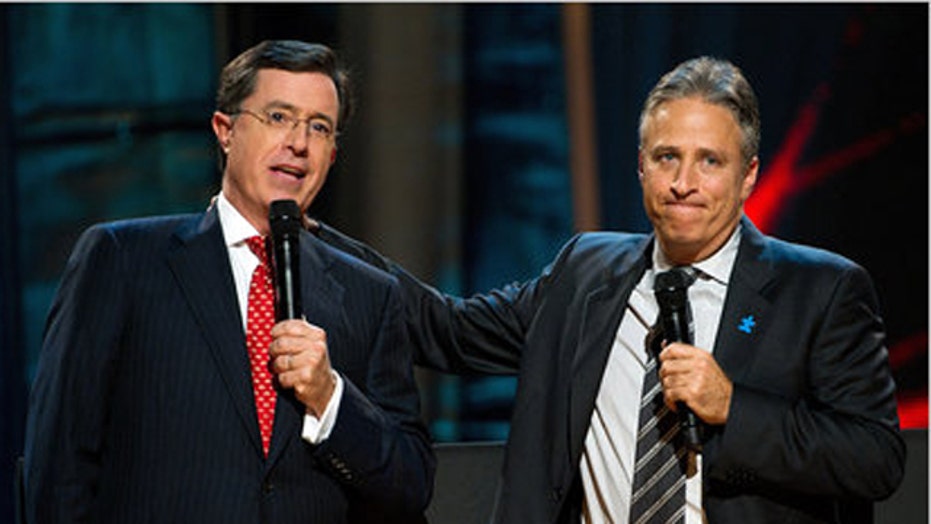 Stewart and Colbert changing their tone?

These two cable guys have changed the nature of comedy and, I believe, had an impact on journalism as well. So it’s worth examining whether they are losing some of their influence.

When Lauren Ashburn and I debated the question with Bill O’Reilly the other night, the segment was widely picked up. So in the interest of a more in-depth discussion (and a few extra clicks), let me explain why.

It’s not just that their ratings are down (by 6 percent this season for Stewart, 3 percent for Colbert). Cable ratings are down generally, but roughly half their audience—more than half a million in both cases--is in the coveted 25-54 demo. Stewart’s “Daily Show” was named by 8 percent in a recent Brookings survey as their most trusted source of news, and Colbert will soon shed his right-wing buffoon persona to take over David Letterman’s show.

I’ve been on both their shows, been the butt of their jokes, and admire their talent. They excel at using videotape to expose hypocrisy and stupidity among politicians and pundits alike. And some journalists, such as Brian Williams (a frequent Stewart guest), have occasionally copied the technique.

Stewart is obsessed—remember when he went on “Crossfire” and denounced the show?—with why journalists can’t get at the “truth” instead of repeating partisan spin from both sides. Colbert once told me that reporters tell him privately, “I wish I could say what you say”—and that he can’t see why they don’t use the same techniques, minus the laughs, to call people out.

But neither man makes a secret of leaning left, and that, I think, is why their influence has dimmed a bit in the age of Obama.

During the Bush years, as Iraq spun out of control and Stewart regularly surveyed the Mess O’ Potamia, they brought great passion to going after the likes of W. and Dick Cheney. You can see that passion again now that Iraq is in chaos and Cheney is back on the airwaves.

But when it comes to Obama, the humor is gentle. I do recall Stewart pummeling the president over the botched ObamaCare rollout. But on the IRS scandal this week, he mocked the tax agency for almost criminal stupidity in losing all those emails—but never questioned whether the Obama administration is engaged in a coverup. With Hillary stumbling over questions about her personal wealth, he used clips depicting a “Poor-Off” between her and Joe Biden—but in a way that utterly skirted whether she has a political problem.

Lauren disagreed on the “Factor,” saying: “Look at all the scandals that have happened under the Obama administration.  You have the IRS scandal, the VA scandal, Iraq in chaos and let's not forget about ObamaCare.  And they went really hard on Obama.”

To which O’Reilly replied: “Maybe you are watching the closed-circuit broadcast.”

But she also said that “they are pleasing their young audience by attacking conservatives who are attacking the Obama administration.”

Now I don’t go as far as Bill in saying: “They prop up the Democratic Party and the liberal line, President Obama, by denigrating their opposition.”

And, of course, Fox News has been a favorite Stewart target (although O’Reilly and Jon have done so many interviews and appearances I thought they had a bromance going), and Colbert’s blowhard character is a takeoff on O’Reilly and other anchors.

“I just think when you take half the targets off the field…you are just a little bit out of step because the story right now is the Obama administration,” I said on the program.

Right now, Obama’s mounting problems are the political story, and Jon and Stephen are largely dancing around that. They seem to aim much of their comedic ammunition at cable news (and we deserve it).

When Stewart is pressed on this, he tends to retreat to the notion that he’s “just a comedian.” But he’s more than that, and he knows it: He’s an important social critic.

Maybe the duo’s high-water mark was in 2010, when they staged a Rally for Sanity on the Washington Mall and appealed to the sensible center—which seems to be shrinking in these days of hyperpartisanship.

Both men have been doing this a long time (Stewart since 1999, Colbert since 2005), so the format is not as fresh as it used to be. And there is more competition these days—John Oliver’s “Last Week Tonight” on HBO has been digging deeper on issues, even crashing the FCC’s website when he urged viewers to complain to the agency over so-called Net Neutrality.

Stewart and Colbert excel at using the tools of television and comedy to cut through the BS. They do a great job of educating their young audience. And perhaps it’s easier to be funny when you’re in the opposition.

But with 2-1/2 years to go in Obama’s presidency, I’d just like to see them take more risks when it comes to challenging their base.