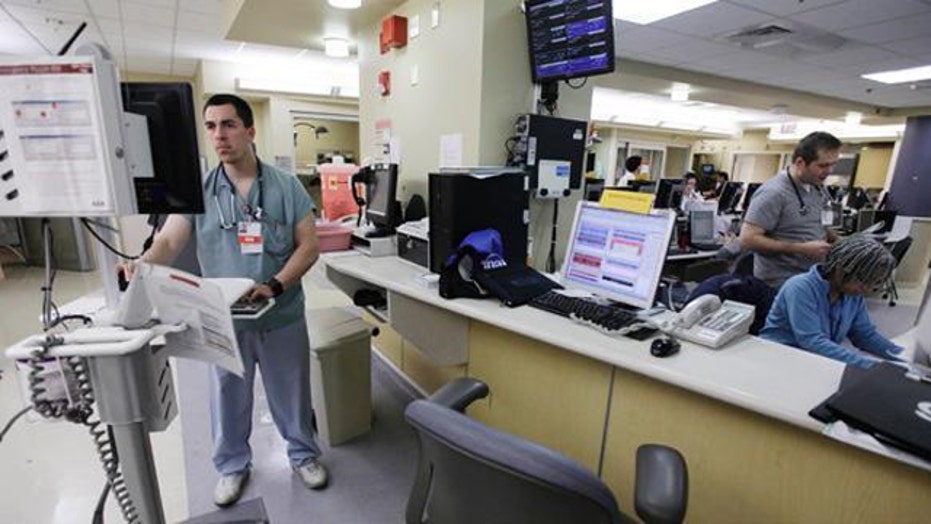 Study: ER visits on the rise

Under the Affordable Care Act, millions of people were enrolled in the expanded Medicaid, a jointly run state and federal program that primarily provides free or low-cost health care to low-income people, the elderly and disabled. Federal law requires that states annually verify the eligibility of recipients -- but some are not, and that means tens of thousands of ineligible people are receiving benefits.

Arkansas, for instance, has failed to comply with the law, and internal emails from the Arkansas Department of Human Services reveal officials have yet to begin what's known as a "redetermination."

"We're trying to hold the DHS accountable for the promises they made, and make sure that the people who are on the program actually qualify for it," said state Sen. Bryan King.

According to emails between King and Arkansas DHS Director John Selig, the state applied for and was issued two waivers from the federal government granting extensions for their "redetermination" deadline.

But the delay is costing taxpayers money. Selig estimated in a report to a Joint Budget Committee that an eligibility review could remove up to 40,000 people from the state's Medicaid system -- saving taxpayers up to $20 million a month.

"The fact that they aren't doing this already in a program riddled with cost overruns shows their lack of regard for taxpayer dollars funded by hardworking Americans," said Charles Siler, director of media relations for the Foundation for Government Accountability (FGA).

"What Arkansas and Massachusetts tell us is that the Obama administration doesn't care about being responsible with the billions of taxpayer dollars being wasted by ObamaCare's Medicaid expansion," FGA senior fellow Josh Archambault said. "In truth, we have yet to uncover how many other states the feds are allowing to sidestep the law, and these states may simply be the tip of the iceberg."

In Arkansas, the first DHS waiver extended the review deadline to March, from Dec. 31, 2014, but Selig testified as late as April 20 that his department had been issued another waiver pushing the deadline to September.

When King requested to see the "waivers," the DHS was unable to provide them. "We're thinking the dog ate their waiver," King said after months of requests.

But Arkansas DHS communications director Amy Webb provided Fox News with a letter that appears to confirm the extension, dated April 27 from the federal Centers for Medicare & Medicaid Services (CMS).

"The deadline to complete those delayed renewals was moved to September 30, 2015," Webb told Fox News. "Knowing that people would feel more comfortable with that in writing, we requested formal confirmation of the September 30th date last week."

Webb said they are in "constant contact" with CMS on their "system development." She said they plan to begin the process "in the next two weeks."

"They've been misleading us -- that's just the facts," King said. "It seems that they're trying to cover what they should have been doing to begin with. ... And it's wasting money."

Siler agreed, saying, "They are all too happy to leave on tens of thousands of individuals at the cost of millions of taxpayer dollars per month, than comply with the law and start controlling the exorbitant costs."

Massachusetts officials blame ACA-required changes in the state's Medicaid enrollment website -- changes that crashed the site -- for its delay in reviewing recipient eligibility.

Because the website crashed, former Massachusetts Gov. Deval Patrick struck a deal with the Obama administration that allowed more than 320,000 people to be added to the Medicaid expansion program without checking eligibility, Archambault said.

Archambault estimates that 1.2 million people in Massachusetts still need to have their eligibility verified.

"They have not completed a redetermination in almost two years," Archambault said. "If the Massachusetts Affordable Care Act website had worked the first time around, state and federal taxpayers would have paid far less than they have now."

The FGA noted a change from the Patrick administration. Current Massachusetts Gov. Charlie Baker estimates saving $400 million when the redetermination process is completed.

"Medicaid is a high-risk program," said Carolyn Yocom, director of the health care team at the Government Accountability Office (GAO). "High risk for waste, fraud, and abuse by virtue of its improper payment system."

"CMS continues to face persistent challenges in reducing improper payments, and requires additional leadership commitment to ensure that ongoing efforts - such as working with states to identify and collect improper payments - benefit from reliable data systems that will reduce these," Yocom said.