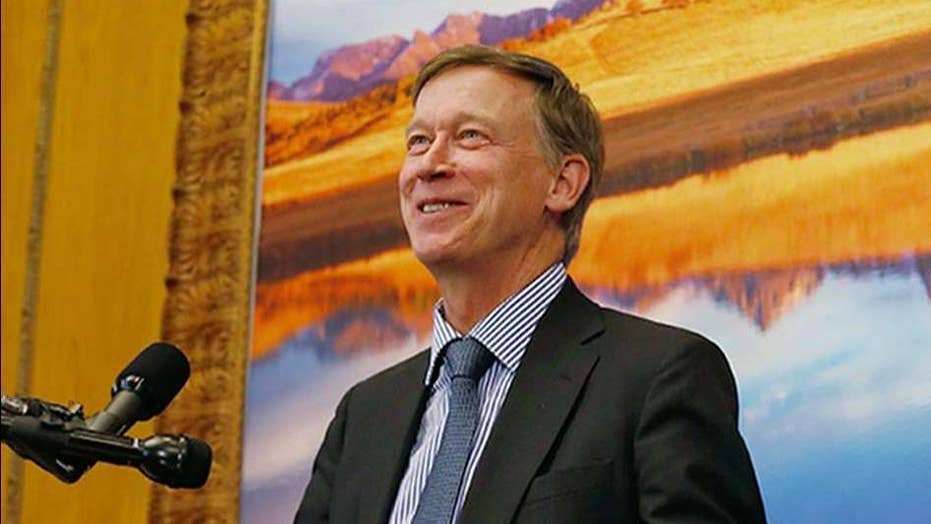 Coping with a struggling campaign and facing the reality that he wouldn’t make the stage at next month’s third round of Democratic presidential debates, former two-term Colorado Gov. John Hickenlooper ended his long-shot bid for the White House on Thursday.

"Today, I’m ending my campaign for president. But I will never stop believing that America can only move forward when we work together," Hickenlooper said in a video released on social media and through email.

“A little over six months ago, I announced my run for president. In almost every aspect, this journey has been more exciting and more rewarding than I ever imagined. Although, of course, I did imagine a very different conclusion," he added.

Hickenlooper's announcement also came as he’s been facing pressure from national Democrats this summer to end his presidential campaign and jump into Colorado’s crowded Democratic U.S. Senate primary for the chance to face off next year against first-term GOP Sen. Cory Gardner, who faces a challenging re-election.

"People want to know what comes next for me. I’ve heard from so many Coloradans who want me to run for the United States Senate," Hickenlooper said in his video, addressing the speculation. "They remind me how much is at stake for our country. And our state."

Hinting at a possible Senate bid, he added: "I intend to give that some serious thought."

Hickenlooper, a geologist by training who started a successful brewery in downtown Denver and then served two terms as the city’s mayor before winning the governorship, announced his candidacy for president in March. But during the spring and summer he struggled to break out of the pack, outshined by candidates with bigger names and bigger campaign war chests, as well as less-known rivals who generated buzz and soared ahead of him in the polls.

Hickenlooper had a lackluster second quarter of fundraising, bringing in just $1 million during the April-June period. And six weeks ago, much of his senior staff jumped ship over differences with the candidate regarding the future of the campaign.

There also was virtually no chance Hickenlooper would reach the two Democratic National Committee thresholds – campaign contributions from 130,000 individual donors and at least 2 percent in four qualifying polls – to make the stage at the next two debates, which will be held next month and in October.

Hickenlooper focused his White House bid on his record as a governor who accomplished results by working with all sides, but who also pushed back against the leftward drift of the Democratic Party.

He was no fan of "Medicare-for-all," telling Fox News earlier this year that “we will get to some version of single-payer, but single-payer doesn’t include getting rid of insurance companies.”

At last month’s second round of Democratic presidential nomination debates, he repeatedly took aim at rivals Sens. Bernie Sanders of Vermont and Elizabeth Warren of Massachusetts, the party’s progressive standard-bearers and biggest advocates of a government-run Medicare-for-all system that would eliminate private insurance.

In the spin room after the debate, he once again painted Medicare-for-all as unrealistic, telling Fox News “there are a lot of different ways to move this country forward. It might not be these moon shots.”

And on the Green New Deal -- the sweeping proposal that aims to transform the country’s economy to fight climate change while enacting a host of new health care and welfare programs--Hickenlooper argued that the plan shouldn’t be “a litmus test that you’re either with us or wrong.”

A Democratic source familiar with Hickenlooper’s recent conversations with Senate Democratic leadership regarding a potential Senate run told Fox News on Wednesday that “the Democratic Senatorial Campaign Committee wants him to drop [his White House bid] and they want this recruit really badly.”

Hickenlooper left office in January with an approval rating nearly 20 percentage points above water. And a new poll in Colorado released this week suggested Hickenlooper would be far ahead of the rest of the already-crowded field of candidates for the Democratic Senate nomination if he were to join that race.

Democrats are fighting to regain the majority in the Senate, which the GOP currently controls 53-47.