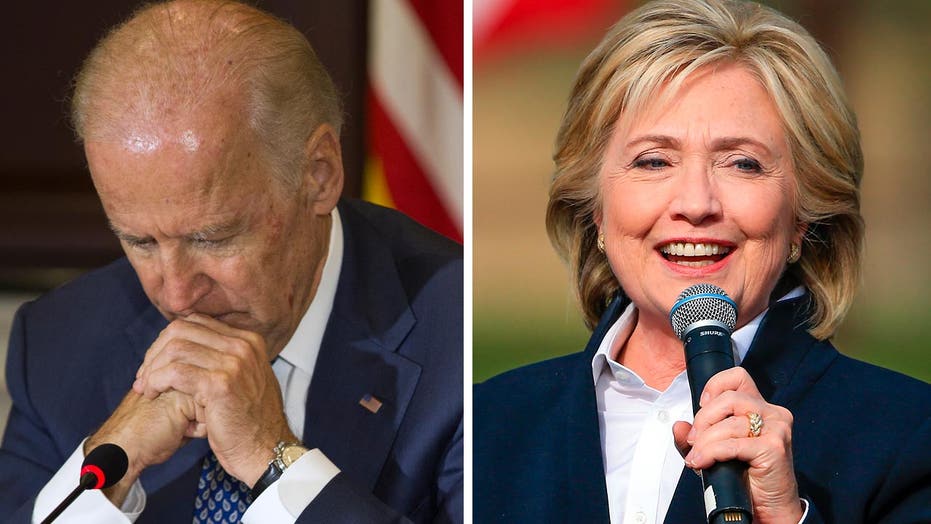 Biden's possible run fades as Clinton rises in the debate

Clinton locked down her party's nomination by dwarfing the other candidates; Ed Henry reports on 'Special Report'

Vice President Joe Biden is saying in phone calls to top Democrats that he's likely to jump into the presidential race but his entry is still not imminent, according to a senior Democratic source briefed on the calls.

Biden is privately telling Democrats he is leaning toward getting into the race at some point "over the next month," according to the source briefed on the calls.

In a letter obtained by The Associated Press Thursday, Former Delaware Sen. Ted Kaufman, one of Biden’s closest political advisers, said Biden would soon make a decision to enter the face. Kaufman reportedly asked former staffers to stay close in contact and said Biden would need their help immediately.

"If he runs, he will run because of his burning conviction that we need to fundamentally change the balance in our economy and the political structure to restore the ability of the middle class to get ahead," Kaufman said.

That timetable could test the patience of some Democrats who have been pressing Biden to make a decision either way, especially in the wake of frontrunner Hillary Clinton's strong performance in last Tuesday's first Democratic debate, as well as her announcement that her campaign has $33 million in the bank.

Biden has been making a series of phone calls to top Democrats in key states like Iowa and New Hampshire since last Tuesday, in large part to stress the debate results will not be a key factor in his own decision.

The source familiar with the calls added Biden advisers close to him believes Clinton still has political problems -- and potentially legal ones -- stemming from her email controversy.

In fact, Biden has also specifically indicated in the calls that if he were to opt out of the race he has no plans to endorse Clinton because he believes it is an open race that has not been sewn up by the former Secretary of State.

The calls and Kaufman’s letter to former Biden aides seem to signal he’s very much considering running for president in 2016. However, Biden’s top consideration is still the welfare and support of his family, Kaufman reiterated. The vice president has said previously he’s unsure he has the emotional fortitude to run following his son’s death.

"He is determined to take, and to give his family, as much time as possible to work this through," Kaufman said.

Fox News’ Ed Henry and The Associated Press contributed to this report.