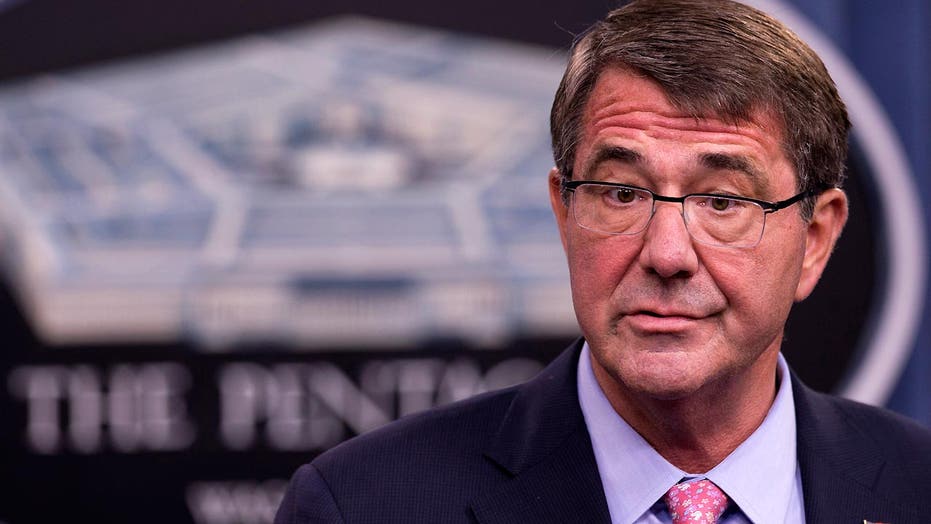 Pentagon may change rules of engagement for response to ISIS

Defense Secretary admits rules set by Pentagon, WH have been too strict; Jennifer Griffin with what that means on 'Special Report'

The Defense Department may be moving to loosen the rules of engagement in the war against the Islamic State, following criticism that the military’s strict policies are undermining the 14-month air campaign over Iraq and Syria.

Defense Secretary Ash Carter opened the door to the changes in an interview on Thursday, even as President Obama defends the current military strategy in the wake of the Paris terror attacks.

“We're prepared to change the rules of engagement. We've changed tactics, as we just did in the case of the fuel trucks,” Carter said on MSNBC.

The fuel trucks Carter mentioned were targeted in an airstrike by U.S. Air Force A-10 and AC-130 gunships Monday. The strike destroyed 116 ISIS fuel trucks, part of the U.S.-led coalition’s new effort to destroy a key revenue source for the terror network.

Prior to that strike, U.S. military jets were not allowed to hit ISIS fuel trucks because killing the drivers was seen as killing civilians. For the past year, ISIS has earned $1 million a day from black-market oil sales, according to the Pentagon.

As Carter mentioned, the Monday strike showed the Defense Department already is adjusting its tactics to a degree, in a bid to address factors that ISIS is exploiting.

"ISIS uses our rules of engagement against us," one U.S. military official told Fox News.

ISIS has used civilians from the beginning of the air war as shields against U.S. airstrikes. ISIS leadership also is known to hide in plain view above a prison in the de-facto ISIS capital of Raqqa, not far from where “Jihadi John” was killed recently by a U.S. drone.

Even before the Paris terror attacks, the U.S. launched Operation Tidal Wave II last month to destroy oil infrastructure in eastern Syria used by ISIS to generate two-thirds of its revenue – sites the airstrikes previously had avoided.

Lt. Gen. Sean MacFarland, the new U.S. Army general leading the coalition against ISIS, has made destroying ISIS oil infrastructure a priority, according to defense officials. He named the current operation after a U.S. operation of the same name in World War II that targeted Nazi oil infrastructure in Romania.

Loosening the rules of engagement is something critics have been demanding for months.

Retired Air Force Gen. David Deptula, in charge of the Afghanistan air war against the Taliban in 2001 and responsible for the “no-fly zone” over Iraq during the 1990s, said restrictive rules of engagement for U.S. pilots since the start of the anti-ISIS air campaign have enabled the enemy to inflict massive civilian casualties – even though the rules are meant to avoid civilian casualties.

“There is a lot of frustration because of the onerous restrictions that are being placed on individuals who are prosecuting air operations,” Deptula said. “The ‘mother may I?’ request chain to be able to engage is inducing delay in actually being effective. You have obvious Islamic State targets you would like to engage but you have to wait to get approval that takes hours.”

He asked: “What is the logic of a policy that restricts the application of air power to prevent the potential of collateral damage, while assuring the certainty of the Islamic State's crimes against humanity?”

Russia does not appear to be under the same constraints as the United States when it comes to civilian casualties.

On Wednesday, a spokesman for the U.S.-led coalition said Russia was using “dumb” bombs to carry out the majority of its strikes against ISIS.

“Their history has been both reckless and irresponsible,” Col. Steve Warren said.  “Those are antiquated tactics. We don't even use those type of tactics anymore. … Those are the type of tactics needed only if you don't possess the technology, the skills and the capabilities to conduct the type of precision strikes that our coalition conducts.”

While the Pentagon weighs its approach, pressure may be building from both sides of the aisle. Democratic presidential front-runner Hillary Clinton, speaking in New York Thursday, also indicated a desire to expand the air campaign against ISIS and loosen the rules of engagement.

“It is time to begin a new phase and intensify and broaden our efforts to smash the would-be caliphate and deny ISIS control of territory in Iraq and Syria. That starts with a more effective coalition air campaign, with more allied planes, more strikes, and a broader target set,” she said at the Council on Foreign Relations.