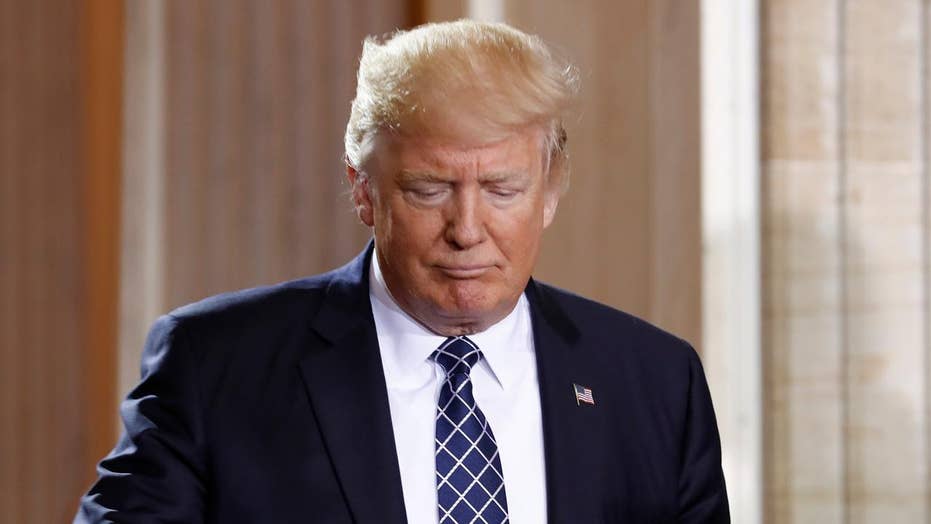 Trump backs off wall demands to avoid a gov't shutdown

The president is asking for money to repair and replace some existing border fence and build some new sections; John Roberts has the roundup for 'Special Report'

Here’s what we know, as Congress scrambles to pass a critical spending measure.

No one wants the government to shut down.

But there’s no deal yet.

House Republicans are determined to take another stab at repealing and replacing ObamaCare. A spokeswoman for House Speaker Paul Ryan, R-Wis., and a senior White House aide wouldn’t rule out a vote this week, though that’s unlikely.

But there’s no deal yet.

The reality is: health care can wait a bit. The government is only flush with cash through 11:59:59 p.m. ET Friday.

“It’s absurd that we are 72 hours before shutting down the government and we haven’t reached an agreement,” complained House Minority Whip Steny Hoyer, D-Md.

Just over the weekend, Budget Director Mick Mulvaney told “Fox News Sunday” that the Trump administration was “asking for our priorities.” But Mulvaney conceded that “we don’t know yet” if the president will insist that Congress include funding for a border wall in the spending bill.

Then came signals from the White House that President Trump wasn’t backing down on the wall – but said the wall wasn’t essential for this spending round.

“He is showing reasonableness on the wall,” declared White House Chief of Staff Reince Priebus about his boss. “He has put [House Minority Leader Nancy] Pelosi, D-Calif., and Hoyer back on their heels. His willingness to compromise on wall funding is a surprise to Democrats.”

Democrats may be surprised. But the president needs Democrats more than they need him.

There’s more to be settled to fund the government. Democrats may cede some $15 billion in money for the military in an effort to protect subsidies for low-income ObamaCare beneficiaries which the president threatened to nix.

Remaining on the table is a solution to covering the health benefits of miners and even shoring up a Medicare shortfall in Puerto Rico.

But it’s now Wednesday. There’s still no bill text of the interim spending bill. Negotiators are starting to run out of racetrack. In 1995, President Bill Clinton and House Speaker Newt Gingrich, R-Ga., stumbled into the first of three government shutdowns, partly because they ran out of time. The way to avert a shutdown Friday night is to pass a stopgap spending bill known as a continuing resolution or CR. Such an approach could fund the government for a few days or a week.

“I don’t want to start talking about a short-term CR on Tuesday,” said Senate Majority Leader Mitch McConnell, R-Ky. “We’re hoping to reach an agreement to keep the government funded until September.”

And what about the wall campaign promise?

“What Mr. Trump says is a wall will be a wall,” said one member of the House GOP leadership.

But what about the bricks and mortar and trowels for that wall?

One senior Senate source said the wall would be brick in some places and a fence in others. An “electronic frontier” would surveil a few spots. Drones would maintain the others, and even blimps.

You thought Mexico was going to pay for it. Try Goodyear.

If Congress and Trump can avoid a government shutdown this week, House Republicans hope to move their version of health care reform next week.

But it’s not clear that’s ready to go.

“That narrative that [Trump] needs to pass some piece of legislation in the first 100 days is an unrealistic standard,” said Priebus.

The 100-day temporal marker for the Trump presidency hits Saturday.

Tuesday night, Republicans bandied updated health care language. Several conservatives signaled their support this week. The question is whether the revamped plan fixes one problem and breaks another. In other words, did the GOP successfully court conservatives but lose moderates?

The updated language gives states which expanded Medicare the chance to opt out of ObamaCare when it comes to providing “essential” health services under insurance plans. Deeming more medical procedures as “essential” drives up premiums.

One GOP source said moderate Republicans who represent Medicare expansion states should support the changes because their governors will never back certifying fewer benefits as “essential.” But a skeptic pointed out that those governors would not always be governor. So, anything could happen in the future.

A conservative House member with strong reservations about the bill conceded to Fox that the retrenched plan “may be the best we can get.” The Republican lawmaker admitted the new blueprint truly didn’t “repeal and replace” Obamacare – the GOP’s campaign mantra since 2010. Ironically, the thought is some Republicans may be willing to vote yes for the reworked bill so long as it isn’t portrayed as repealing and replacing ObamaCare.

In other words, the GOP said it would repeal and replace ObamaCare. It failed to do so. But this could be only thing lawmakers could conceivably approve. So, the bill’s supporters simply wouldn’t portray it as such.

Late Tuesday, Ryan swore-in the newest House member, Rep. Ron Estes, R-Kan. Estes won a special election two weeks ago to succeed Mike Pompeo in Congress. Pompeo resigned earlier this year to become CIA director. Estes’s family huddled in Ryan’s ceremonial office off the House floor for a photo-op engineered to look like the swearing-in before heading to the House floor. That’s where Ryan actually swore-in Estes as a member of Congress.

“We do the fake one first and then the real one,” Ryan instructed Estes.

That two-step is a lot like how things have been on Capitol Hill lately. The fake one first and then the real one later.

First a demand to fund the wall. Then no demand. On health care, Republicans tried one version of the bill before yanking it off the floor last month. Leaders promise to try again soon.

But will the next one be the real one?