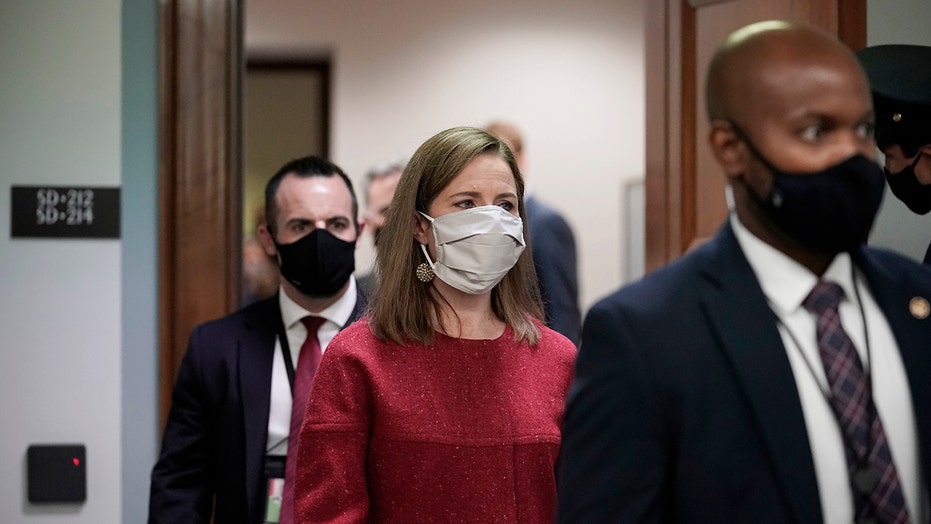 Bret Baier, Chris Wallace on how Barrett has responded to senators during Day 2

Sen. Sheldon Whitehouse, D-R.I., opted not to question Supreme Court nominee Judge Amy Coney Barrett during her confirmation hearing on Tuesday, instead treating the Senate Judiciary Committee to a nearly half-hour presentation on how big-money donors have influenced both the Republican Party and the Supreme Court.

Whitehouse tied issues like abortion and health care to large donations to conservative judicial groups and statements from Republicans about court selections, such as a quote from President Trump that is related to an Affordable Care Act case that will go before the Supreme Court in November.

BARRETT: I'VE HAD NO CONVERSATION WITH TRUMP ABOUT HOW I'D RULE ON ANY CASE

"In this litigation, he said, 'We want to terminate health care under ObamaCare.' That is the president's statement," Whitehouse said.

He then referred to briefs from Republican senators arguing that courts should eliminate the Affordable Care Act, as well as the claim often made by Democrats that Trump specifically chose Barrett for the Supreme Court to rule against the health care law.

"Why is it surprising for us to be concerned that you want this nominee to do what you want nominees to do?” Whitehouse asked his GOP colleagues.

“A lot of this has to do with money,” Whitehouse continued, discussing large contributions and alleging that they have influenced court cases.

"National Federation of Independent Businesses, until it filed the NFIB v. Sebelius case, had its biggest donation ever of $21,000," Whitehouse said, referring to the challenge to the Affordable Care Act that ultimately led to a 2012 Supreme Court decision upholding the law. "In the year that it went to work on the Affordable Care Act, 10 wealthy donors gave $10 million. Somebody deserves a thank you."

Whitehouse went on to bring up abortion cases and the Republican Party’s 2016 platform’s call for judicial appointments who would “reverse the long line of activist decisions – including Roe.” He also referenced Sen. Josh Hawley, R-Mo., quoting him as saying that he would only vote for judicial nominees who think Roe v. Wade was decided incorrectly.

Whitehouse then delved into what he called “the scheme” that he believes is at play.

“In all cases, there’s big anonymous money behind various lanes of activity,” he said, holding up a sign bearing the names of the Federalist Society and the Judicial Crisis Network, along with a reference to legal “groups,” all of whom receive millions in anonymous donations as they influence judicial nominations and court cases.

“Eighty cases under Chief Justice Roberts that have these characteristics. One, they were decided 5-4, by a bare majority. Two, the 5-4 majority was partisan, in the sense that not one Democratic appointee joined the five. I refer to that group as the Roberts Five, it changes a little bit as with Justice Scalia’s death, for instance, but there has been a steady Roberts Five that has delivered now 80 of these decisions. And the last characteristic of them is that there is an identifiable Republican donor interest in those cases, and in every single case that donor interest won.”

But while Whitehouse began his lecture by citing issues such as health care, abortion and gay marriage, he said the cases he was talking about were not related to those issues. Instead, he said they were matters related to “power,” such as dark money in politics.

When he concluded, Whitehouse thanked Barrett for hearing him out and hinted that he will indeed ask her questions on Wednesday.

“I think this gives you a chance for you and I to tee up an interesting conversation tomorrow,” he said.

Sen. Ted Cruz, R-Texas, spoke after Whitehouse and addressed his claims, pointing to dark money from liberal organizations such as Demand Justice, which spent $5 million in opposition to Justice Brett Kavanaugh's nomination and has "launched a seven-figure ad buy" opposing Barrett.