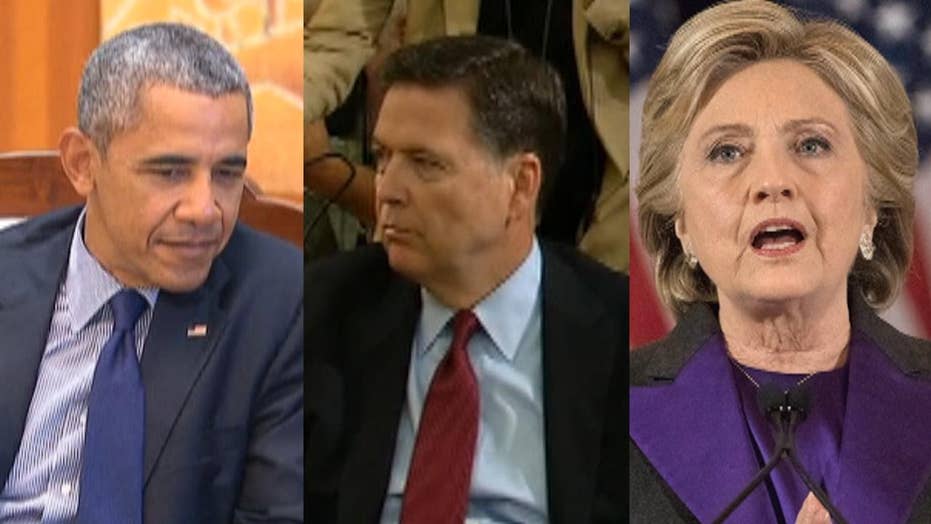 With the IG report on the Hillary Clinton email investigation about to be released, here is who could be in the report’s crosshairs and why they are potential targets.

Attorney General Jeff Sessions, on the eve of the release of a long-awaited watchdog report on the Hillary Clinton email case, pointedly warned that the findings could lead to more firings.

The Justice Department inspector general report reviewing the FBI and DOJ's handling of that case is slated to drop Thursday.

In an exclusive interview with The Hill’s new web show “Rising” on Wednesday, Sessions said the option of “termination” is on the table for those accused of serious wrongdoing.

“If anyone else shows up in this report to have done something that requires termination we will do so,” Sessions told The Hill.

It's unclear whether Sessions knows which individuals will be cited in the report, but several top FBI and DOJ officials are likely to come under criticism in the findings by IG Michael Horowitz. For more than a year, the inspector general has been reviewing those agencies' actions related to its investigation into Clinton’s use of a private email server while she was secretary of state.

IG REPORT TO BE RELEASED: WHO'S IN THE CROSSHAIRS?

“I think it will be a lengthy report and a careful report,” Sessions said, adding that he thinks it will “help us better fix any problems that we have and reassure the American people that some of the concerns that have been raised are not true.”

The report is expected to look at, among other things, whether “certain underlying investigative decisions were based on improper considerations.”

“I think it's going to put a lot of the missing pieces in this giant puzzle together,” House Judiciary Committee Chairman Bob Goodlatte, R-Va., predicted Wednesday on Fox News’ “America’s Newsroom.”

Justice Department Inspector General Michael Horowitz has been investigating whether decisions in the Clinton email probe were based on "improper considerations" for over a year. (AP)

Comey and McCabe have already been fired from the department, in part over issues related to the probe.

Horowitz has investigated whether it was improper for Comey to make a public announcement about his decision to not recommend prosecution for Clinton over the private email server and mishandling of classified information. Comey, in that announcement, called Clinton and her associates “extremely careless.” A draft of Horowitz’s report reportedly called Comey “insubordinate,” while also criticizing his decision to notify Congress the probe was being reopened just days before the 2016 election.

Comey was fired in May 2017, upon recommendation by current Deputy Attorney General Rod Rosenstein. They cited his handling of the Clinton case, though President Trump later indicated the Russia probe was also a factor. Trump has continued to decry that investigation as a "witch hunt" and is likely to seize on the IG findings to further question the FBI's integrity. At the same time, some of the IG findings may hit the bureau for actions seen as harmful to Clinton.

Sessions told The Hill that Comey’s firing was justified.

“It was the right thing to do. The facts were pretty clear on it. He made a big mistake and he testified only a few weeks before the termination that he would do it again [announce reopening the Clinton probe] if he had the opportunity,” Sessions said.

McCabe wasn’t fired until March of this year, following a separate inspector general finding that he leaked a self-serving story to the press and later lied about it to Comey and federal investigators. Horowitz’s office sent a criminal referral for McCabe to the U.S. attorney’s office in Washington.

Former Deputy FBI Director Andrew McCabe was fired by Attorney General Jeff Sessions in March after the inspector general's report revealed that he made an unauthorized leak to the media, and later lied about it to Comey and federal investigators. (AP)

In this report, though, Horowitz has investigated whether McCabe should have recused himself from the Clinton email investigation due to this family’s ties to the Democratic Party. He did not decide to do so until a week before the election. McCabe could also come under scrutiny over the timeline of his knowledge of additional Clinton-tied emails found on disgraced Rep. Anthony Weiner’s laptop. McCabe and others knew that the emails were found as early as September 2016, but the FBI did not work to obtain a warrant to review them until October.

This week, lawyers representing McCabe filed a suit against the Justice Department and the FBI alleging that they wouldn’t give up files connected to his firing.

As for Strzok -- who wasn’t fired but rather re-assigned from Special Counsel Robert Mueller’s team to the FBI’s Human Resources Department last year -- the official came under fire when Horowitz found a trove of anti-Trump text messages between him and former FBI employee Lisa Page, with whom he was romantically involved.

Lynch also is expected to come under scrutiny, yet again, over the now-infamous Arizona tarmac meeting with former President Bill Clinton, just days before the FBI announced it would not press criminal charges against Hillary Clinton. Lynch has claimed she and the former president only discussed “innocuous things,” and that the meeting was just a “chance encounter.”

Horowitz is expected to testify before the Senate Judiciary Committee next week on the report.