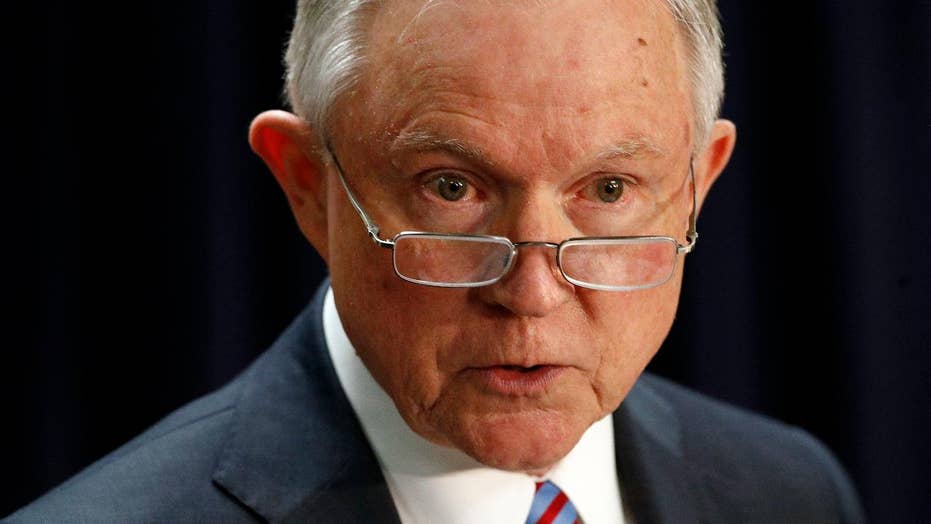 Sessions orders probe on whether Obama gave Hezbollah a pass

The attorney general is ordering a review about possible Obama administration interference in drug investigations involving the Hezbollah terror group, intended to smooth the way for the president's legacy Iran nuclear deal.

EXCLUSIVE: Attorney General Jeff Sessions is launching a review of a law enforcement initiative called Project Cassandra after an investigative report was published this week claiming the Obama administration gave a free pass to Hezbollah’s drug-trafficking and money-laundering operations to help ensure the Iran nuclear deal would stay on track.

The Justice Department said in a statement to Fox News that Sessions on Friday directed a review of prior Drug Enforcement Administration investigations “to evaluate allegations that certain matters were not properly prosecuted and to ensure all matters are appropriately handled.”

“While I am hopeful that there were no barriers constructed by the last administration to allowing DEA agents to fully bring all appropriate cases under Project Cassandra, this is a significant issue for the protection of Americans,” Sessions said in a written statement. “We will review these matters and give full support to investigations of violent drug trafficking organizations.”

According to a bombshell exposé in Politico on Sunday, an elaborate campaign led by the Drug Enforcement Administration, known as Project Cassandra, targeted the Lebanese militant group’s criminal activities.

But when Project Cassandra leaders, who were working out of a DEA facility in Chantilly, Virginia, sought approval for some significant investigations, prosecutions, arrests and financial sanctions, Obama Justice and Treasury Department officials delayed, hindered or rejected their requests, according to Politico.

DOJ officials told Fox News the review could lead to new prosecutions of people affiliated with Hezbollah. It could also lead to an Inspector General investigation of personnel matters relating to the project.

“The DEA has worked tirelessly on this front,” Sessions said. “I am committed to giving our hard working and dedicated DEA agents all the tools that they need to allow them to shut down these drug rings.”

Sessions added, “The Department of Justice is absolutely committed to investigating and prosecuting international drug trafficking organizations and with the assistance of our DEA and FBI agents we will leave no stone unturned as we work to making America safer.”

Since the report surfaced, a number of Republican lawmakers have demanded answers about the allegations. Meanwhile, former Obama administration officials have broadly dismissed the allegations as false.

“There are many reasonable critiques of Obama's foreign policy,” former Obama official Tommy Vietor tweeted. “The idea that he was soft on Hezbollah is not one of them. The story is so manufactured out of thin air that it's hard to push back except to say that it's a figment of the imagination of two very flawed sources.”