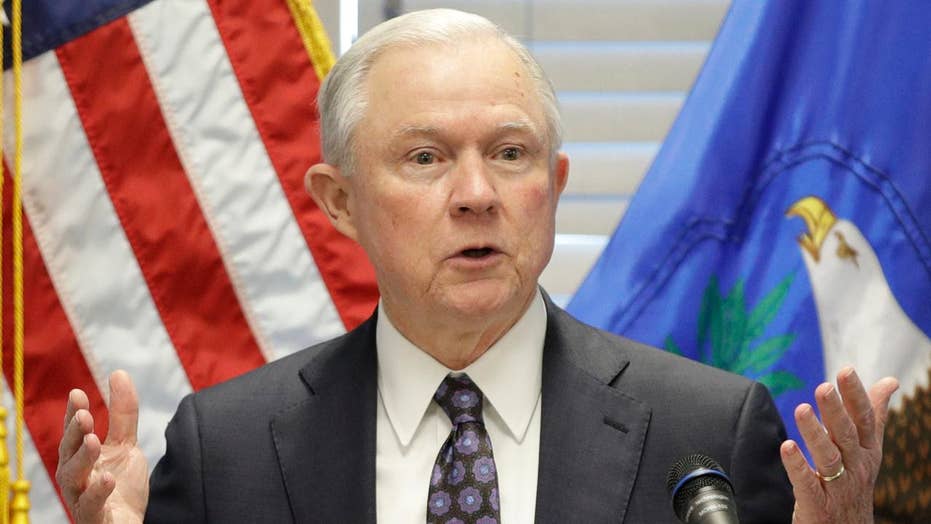 The new rules relax restrictions placed by Obama on the ability of local authorities to seize the assets and property of criminal suspects and share them with federal authorities; James Rosen reports for 'Special Report'

Attorney General Jeff Sessions on Wednesday ordered the expansion of the government’s ability to seize suspects' property – a move that puts him at odds with members of his own party who have slammed the practice for years as ripe for abuse and a violation of civil rights.

Sessions touted the use of asset forfeiture as a “key tool” for law enforcement and said it “weakens criminal organizations and the cartel.”

Sessions hinted he would issue the new directive during a speech Monday at the National District Attorneys Association.

“We hope to issue this week a new directive on asset forfeiture – especially for drug traffickers,” he said. “With care and professionalism, we plan to develop policies to increase forfeitures. No criminal should be allowed to keep the proceeds of their crime. Adoptive forfeitures are appropriate as is sharing with our partners."

As he loosened the rules for what's known as civil asset forfeiture, Sessions also announced he will reverse an Obama administration order that barred local authorities from using the federal system to circumvent state law – prompting his predecessor Eric Holder to label Sessions’ step as “another extremist action.”

Sessions' announcement drew quick condemnation from both Democrats and Republicans.

“This is a step in the wrong direction and I urge the Department of Justice to reconsider,” Wisconsin Rep. Jim Sensenbrenner said in a statement. “Expanding forfeiture without increasing protections is, in my view, unconstitutional and wrong.”

"This is a step in the wrong direction and I urge the Department of Justice to reconsider."

Sen. Rand Paul, R-Ky., said he opposes “the government overstepping its boundaries by assuming a suspect’s guilt and seizing their property before they even have their day in court.”

Civil forfeiture is when police and prosecutors seize property, cars or cash from someone they suspect of wrongdoing. It differs from criminal forfeiture cases, where prosecutors typically must prove a person is guilty or reach a settlement before freezing funds or selling property.

In civil forfeiture, authorities don’t have to prove guilt, file charges or obtain a conviction before seizing private property.

Asset forfeiture is used at the state level to fund police departments. Sessions has argued it will help the DOJ go after drug offenders. But because the government doesn’t need to file criminal charges to take a person’s money or property, some warn authorities could use it to choke off, for instance, the sale of marijuana in states where it's legal.

Sessions argues that increased civil forfeiture powers gives law enforcement officials an effective tool to go after lawbreakers. The ability to freeze funds and seize assets allows authorities to hit alleged criminals where it hurts the most – their wallets.

But Rep. Darrell Issa, R-Calif., who sponsored legislation earlier this year to regulate asset forfeiture, said Sessions’ agenda is “a troubling step backward” that would “bring back a loophole that’s become one of the most flagrantly abused provisions of this policy.”

He added, “Criminals shouldn’t be able to keep the proceeds of their crime, but innocent Americans shouldn’t lose their right to due process, or their private property rights, in order to make that happen.”

There have been multiple cases where the authorities have stepped on the paper-thin protections people have against asset forfeiture.

Supreme Court Justice Clarence Thomas also has gone on the record about asset forfeiture reform in the past.

In a March 6 filing, the conservative justice wrote that asset forfeiture has led to “egregious and well-chronicled abuses,” and added that the practice frequently targets groups that are unable to financially defend themselves in drawn-out forfeiture proceedings.

A March report from the Department of Justice’s inspector general also found multiple issues with the asset forfeiture program including poor data collection as well as inadequate training of state and local officers. Under the DOJ’s adoptive forfeiture program, up to 80 percent of the proceeds from a seizure can be shared with local agencies.