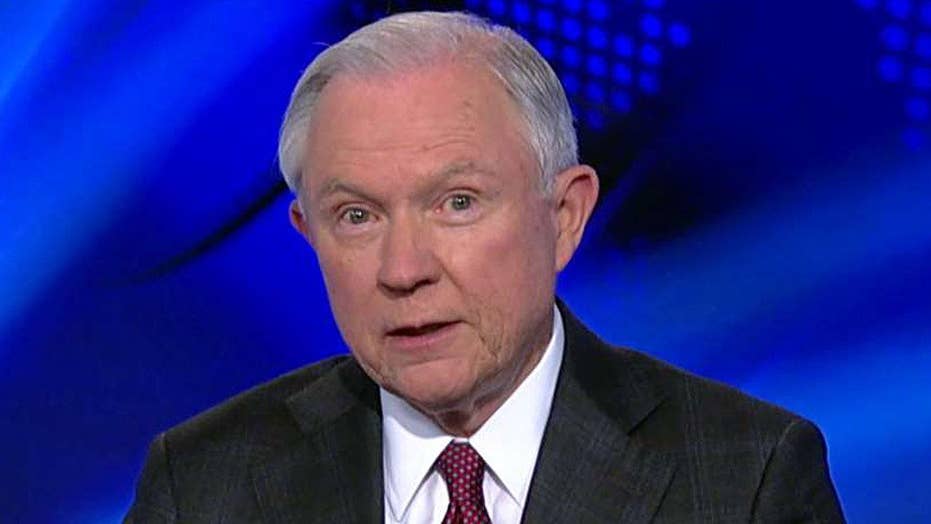 AG Sessions: I needed to clear air in Russian probe

Exclusive: Attorney general tells Tucker why he decided to recuse himself from all probes on Russia's activities during the 2016 election, saying he did not an improper discussion with Russian ambassador #Tucker

Attorney General Jeff Sessions announced Thursday he will recuse himself from “any existing or future investigations” regarding the 2016 presidential campaign, responding to bipartisan pressure to step aside from a probe into Moscow meddling amid revelations he spoke twice with Russia’s ambassador and didn’t disclose it to Congress.

In a press conference Thursday afternoon, Sessions pushed back forcefully, however, on allegations he misled lawmakers. Though he testified during his confirmation hearing that he had no “communications” with Russia during the campaign, when he was a top surrogate for then-candidate Donald Trump, Sessions defended his answer as “honest and correct.”

“I never had meetings with Russian operatives or Russian intermediaries about the Trump campaign,” he said.

Sessions said he did not intend to mislead anyone, suggesting he was referring in that hearing only to discussions about the campaign. Still, Sessions said he would write to the Senate Judiciary Committee to “explain this testimony for the record.”

"Jeff Sessions is an honest man," Trump said in a statement released late Thursday. "He did not say anything wrong. He could have stated his response more accurately, but it was clearly not intentional. This whole narrative is a way of saving face for Democrats losing an election that everyone thought they were supposed to win."

The nation’s top law enforcement officer also answered growing calls to recuse himself from a federal investigation into Russian meddling in the 2016 campaign. He said he’s been meeting with Justice officials for weeks about the possibility and has made his conclusion: “I have recused myself in the matters that deal with the Trump campaign.”

In a written statement and at the press conference, Sessions made clear he wasn’t confirming the existence of any investigation. His written statement said: “Acting Deputy Attorney General and U.S. Attorney for the Eastern District of Virginia Dane Boente shall act as and perform the functions of the Attorney General with respect to any matters from which I have recused myself to the extent they exist.”

The press conference amounted to Sessions’ first public effort to calm the political firestorm that erupted overnight – though by the time Sessions addressed reporters, several top Democrats already were demanding his resignation.

House Minority Leader Nancy Pelosi, D-Calif., went so far as to say he had “lied” to Congress, and repeated her resignation demand after the press conference.

Sessions’ “narrow recusal and his sorry attempt to explain away his perjury are totally inadequate,” Pelosi said in a statement. “Attorney General Sessions’ lies to the Senate and to the American people make him unfit to serve as the chief law enforcement officer of our country. He must resign immediately.”

Many Republicans jumped to Sessions’ defense, saying Democrats were engaged in political theater and describing Sessions’ meetings as routine, since he was a senator at the time.

Sen. Roy Blunt, R-Mo., said in a statement that he’d talked to “at least twenty ambassadors in the last six weeks.”

But Republicans including House oversight committee Chairman Jason Chaffetz, R-Utah, and Sen. Rob Portman, R-Ohio, said earlier he should still recuse himself from the DOJ probe.

For Sessions’ detractors, the central problem was his testimony to the Senate during his confirmation hearing.

Asked by Sen. Al Franken, D-Minn., at that hearing what he’d do with evidence that anyone tied to the campaign communicated with Russia last year, Sessions said: “I'm not aware of any of those activities. I have been called a surrogate at a time or two in that campaign and I … did not have communications with the Russians, and I'm unable to comment on it.”

White House Press Secretary Sean Spicer defended Sessions, telling “Fox & Friends” he was “100 percent straight with the committee” and Democrats were playing politics. Spicer said Sessions was referring to discussions in his role as a Trump campaign surrogate.

Earlier Thursday afternoon, President Trump said he has “total” confidence in Sessions, though he said he was not aware of the AG’s meetings.

The Washington Post first reported that Sessions spoke twice last year with Russian Ambassador Sergey Kislyak. One discussion, in July, was described as involving a group of ambassadors after a Heritage Foundation event on the sidelines of the Republican National Convention. Kislyak was part of a “small group” of diplomats who approached Sessions and spoke with him.

A subsequent meeting was held in September in the senator’s office. Justice officials said Sessions met with ambassadors in his capacity as a member of the Senate Armed Services Committee.

Sessions, at his press conference, offered a few details about the September meeting. He said they “talked a little bit about terrorism” as well as Ukraine, at which point it got a bit “testy.”

According to a schedule provided to Fox News, Sessions had 30 meetings with numerous ambassadors from April 14 through Nov. 11. Russia appears on the schedule only once – the Sept. 8 meeting with Kislyak. The day before, Sessions also took a meeting with Ukraine Ambassador Valeriy Chaly.

But for Democrats, the revelations of any Russia discussions only served to fuel long-running accusations that Trump-tied officials have sought to conceal past contacts with Moscow. Earlier this month, Michael Flynn resigned as national security adviser amid accusations he misled Vice President Pence and others over his contact with the Russian ambassador.

Senate Minority Leader Chuck Schumer, D-N.Y., said earlier Thursday that Sessions should resign “for the good of the country.”

After the press conference, Schumer said Sessions “is right to recuse himself, but the fact is he should have done so the moment he was sworn in.”

He added, “This episode has echoes of General Flynn's firing and continues a troubling pattern with this administration. They only do the right thing when they are caught doing the wrong thing. The administration didn't fire General Flynn until he was caught lying and the Attorney General didn't recuse himself until he was caught misleading Congress.”