EXCLUSIVE: Senate Republicans on Wednesday are expected to propose a series of immigration bills seeking to address what they've described as a "crisis" along the U.S. southern border, as the Biden administration grapples with an influx of migrants.

Sen. Joni Ernst, R-Iowa, the vice chair of the Senate GOP, is planning to lead Senate Republicans -- including Sens. Marsha Blackburn, Ted Cruz, Mike Lee and Jim Inhofe -- in offering several bills related to the situation at the border on the Senate floor Wednesday afternoon.

"There's a growing humanitarian and national security crisis at our southern border, and instead of continuing to recklessly rollback the previous administration's policies, ones that were helping curb illegal immigration, the Biden administration and Senate Democrats should support these sensible solutions by Senate Republicans that will actually help address the crisis at our border," Ernst told Fox News.

Ernst will propose "Sarah's Law," a bill named after a young Iowan Sarah Root who was killed by an illegal immigrant who was not detained by Immigration and Customs Enforcement (ICE) and "never faced justice."

Ernst’s bill would require that ICE take custody of a person who is in the country illegally if that person is charged with a crime that "kills or seriously injures another person."The legislation also would mandate an improved victim notification system that lets victims and their families know what happened to their loved ones.

"Michelle Root, Sarah’s mom, says it best: 'I don’t understand why it is so hard to get this law passed. I don’t get Sarah back after this; this is for everyone else,'" Ernst said. "'This is to help so the next person doesn’t have to go through the same thing.' Michelle is right, why would anyone oppose this commonsense, humane solution? It’s a good question for my Senate Democratic colleagues to answer."

Blackburn, R-Tenn., is expected to introduce a bill that would require the Department of Homeland Security to administer DNA tests to all migrants traveling with minors apprehended at the U.S. border.

The legislation would require officials use the DNA tests to determine if the children are traveling with the adults who are actually the family members like they claim.

"Drug cartels and gangs are using children to falsely present themselves as family units and seek asylum at our southern border. These unaccompanied minors are especially vulnerable to trafficking and often forced to perform sex acts," Blackburn told Fox News.

"Making DNA tests mandatory on anyone claiming a family relationship with a minor will send a powerful message that traffickers will be caught and aggressively prosecuted," Blackburn said.

Cruz, R-Texas, will also present on the Senate floor Wednesday, reintroducing Kate’s Law — named for Kate Steinle who was shot and killed by an illegal immigrant who had several felony convictions and had been deported from the United States five times.

The bill imposes a mandatory minimum sentence of five years for any illegal reentry offense, to deter violent illegal aliens who have been previously deported from reentering the country.

Cruz will also be asking for unanimous consent.

Lee, R-Utah, will offer the "Stopping Border Surges Act," which tightens the asylum process and rules around the release of migrant children into the U.S. His office says the bill will close loopholes that encourage "vulnerable immigrant populations to take dangerous, illegal paths of entry into the United States."

Lee's office said the "simple, common-sense adjustments" the bill proposes to current immigration laws will help ensure the "integrity of our borders" and remove perverse incentives for parents to "entrust their children to coyotes and cartels."

And Inhofe, R-Okla., will propose a "simple" resolution to state that it is the "Sense of the Senate that the current influx of migrants at the southern border of the United States constitutes a crisis."

"We all know the situation at the border is a crisis – but you don't have to take my word for it," Inhofe told Fox News. "Look at the facts: 173% increase in border apprehensions compared to just one year ago, this February's apprehensions were the highest for any of that month in over a decade and Biden’s own DHS admits that we are on track for the most illegal migrants i

"Yet, the Biden-Harris administration continues to deny the facts by playing word games about what is happening at the southern border," Inhofe continued. "My resolution today is simple – to require Senate Democrats to accept the facts, or show to American families that they will continue to play partisan politics with border security."

Inhofe's resolution has 16 of cosponsors, including Ernst and Blackburn, and GOP Sens. Tom Cotton, Marco Rubio, John Barrasso, among others. Inhofe will ask that the Senate adopt the resolution by unanimous consent.

But the Biden administration has maintained that it is not a "crisis," preferring, instead, to describe it as a "challenge."

"I think that the -- the answer is no. I think there is a challenge at the border that we are managing, and we have our resources dedicated to managing it," Homeland Security Secretary Alejandro Mayorkas said earlier this month.

And White House press secretary Jen Psaki has called it an "enormous challenge," and said it is a "circumstance," but "not a crisis."

Customs and Border Protection announced that the agency encountered 100,441 individuals in February, a 28% increase over January, the agency said. Of those, 19,246 individuals were in family units, 9,457 were unaccompanied children (UACs) and 71,598 were single adults.

It is unclear how Senate Democrats will respond to Republicans' proposed legislation.

Last week, Senate Majority Leader Chuck Schumer, D-N.Y., said that the Biden administration "deserves an opportunity to respond" to the situation at the border, and said it would be "part of the conversation" as it relates to a "comprehensive immigration reform."

And on the other side of the Capitol, House Speaker Nancy Pelosi, D-Calif., said the Biden administration has the situation at the border "under control." 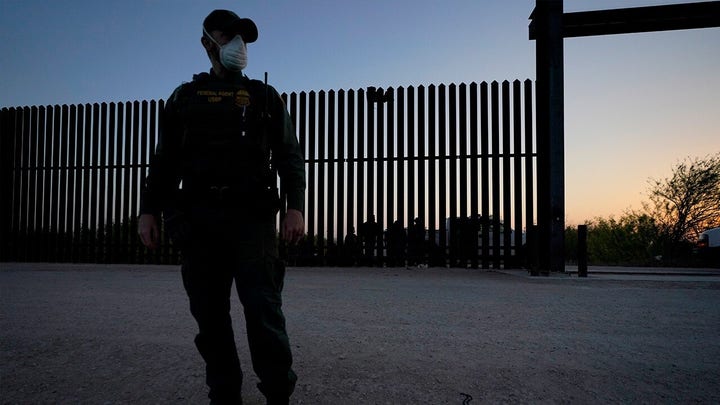 "The Biden administration has this under control," Pelosi said Friday during her weekly news conference at the Capitol last week. "It is change and it will take some time, but it is values-based, humanitarian ... [and] pragmatic with a plan to get things done."

Amid the influx, the Biden administration has urged migrants not to come to the U.S. as they implement and fix what they call a "broken" immigration system. The administration also has said that "the border is closed."

Meanwhile, Department of Health and Human Services announced Tuesday that it is opening a second facility to process child migrants in Carrizo Springs, Texas. HHS' Office of Refugee Resettlement (ORR) said that the facility, known as Carrizo Springs II, will accommodate 500 unaccompanied children in hard-sided structures.

PSAKI: BORDER INFLUX 'NOT A CRISIS,' BUT A CIRCUMSTANCE

"Additional semi-permanent [soft-sided] capacity may be added if necessary, though ORR will always prioritize placing children in hard-sided structures over semi-permanent structures," an ORR spokesperson said.

The opening of the first Carrizo Springs facility had been announced in early February, but numbers of unaccompanied children, and migrants at the border more broadly, have dramatically increased since then.

The agency said it has approximately 13,500 beds, but additional beds are needed "to manage both enhanced COVID-19 mitigation strategies and the increasing numbers of UC referrals from DHS."

HHS announced just days ago that it was opening the Target Lodge Pecos North property in Texas. A statement said it could potentially hold up to 2,000 minors.

The announcement of Carrizo Springs II comes the same day as the Pentagon announced it has received a request for assistance from HHS to house migrant children at Fort Bliss and Joint Base San Antonio in Texas.

Meanwhile, San Diego, over the weekend, agreed to open its convention center to the federal government for use as a temporary shelter. City officials said they would support the "federally funded effort by providing vital services to these vulnerable children who came to our country seeking safety."