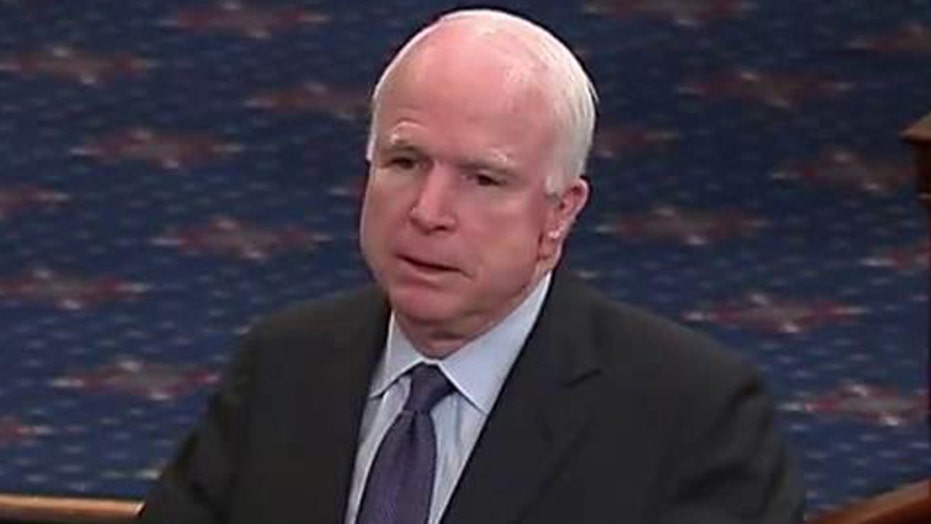 A Democrat-led Senate panel released a scathing report Tuesday on CIA interrogation practices amid warnings from lawmakers that the findings could "endanger the lives of Americans" -- a concern the Obama administration apparently shared as it put more than 6,000 Marines on high alert.

The report, from the Senate intelligence committee, claimed the interrogation techniques used were "brutal and far worse" than the CIA represented to lawmakers. Further, the report claimed the tactics were not effective and the spy agency gave "inaccurate" information about it to Congress and the White House. The report called CIA management of the program "deeply flawed" -- though agency officials have staunchly defended the program and credited it with helping track down Usama bin Laden and other terror leaders.

Sen. Dianne Feinstein, D-Calif., the head of the intelligence panel who ordered the release of the report, alleged on the Senate floor on Tuesday that the CIA techniques in some cases amounted to "torture."

"History will judge us by our commitment to a just society governed by law and the willingness to face an ugly truth and say 'never again'," she said on the floor. "There may never be the right time to release this report. ... But this report is too important to shelve indefinitely."

The White House and President Obama backed the decision to release the report, despite warnings from lawmakers and some inside the administration that it could lead to a backlash against Americans. More than 6,000 U.S. Marines overseas have been put on "high alert" over the report's release, Fox News is told.

In addition, a official confirmed to Fox News Tuesday that the FBI and the DHS sent out a joint bulletin to law enforcement in the U.S. surrounding the report's release. The bulletin warned that the report could spark violence.

Sens. Marco Rubio, R-Fla., and Jim Risch, R-Idaho, called the move a "partisan effort" by Democrats on the Senate Select Committee on Intelligence. They said the report is not "serious or constructive" and "could endanger the lives of Americans overseas."

"As we have both stated before, we are opposed to this study and believe it will present serious consequences for U.S. national security," they said. "Regardless of what one's opinions may be on these issues, the study by Senate Democrats is an ideologically motivated and distorted recounting of historical events. The fact that the CIA's Detention and Interrogation program developed significant intelligence that helped us identify and capture important al-Qa'ida terrorists, disrupt their ongoing plotting, and take down Usama Bin Ladin is incontrovertible. Claims included in this report that assert the contrary are simply wrong."

The roughly 500-page report, a summary of a still-classified 6,000 page study, amounts to the fullest public accounting from Congress -- at least from Democrats -- of the CIA's alleged use of torture on suspected Al Qaeda detainees held in secret facilities in Europe and Asia in the years after the terrorist attacks of Sept. 11, 2001.

Obama said the Senate report documents a "troubling program" and pledged to make sure "we never resort to those methods again."

He said in a statement: "We will rely on all elements of our national power, including the power and example of our founding ideals. That is why I have consistently supported the declassification of today's report. No nation is perfect. But one of the strengths that makes America exceptional is our willingness to openly confront our past, face our imperfections, make changes and do better."

The CIA, in a statement responding to the report, acknowledged the agency made "mistakes" with its detention and interrogation program but disputed claims that the interrogations were not effective.

"Our review indicates that interrogations of detainees on whom [enhanced interrogation techniques] were used did produce intelligence that helped thwart attack plans, capture terrorists, and save lives," the agency said, also disputing that the agency intentionally misled lawmakers and other officials on the program.

CIA officials tell Fox News that the interrogation program produced valuable and actionable intelligence. They specifically cite the identification of the courier who led to bin Laden and his compound in Pakistan. CIA officials say the courier's name was first revealed by Amar al-Baluchi while in the CIA interrogation program, though he was not subjected to waterboarding.

When detainee Hasan Gul was subjected to the enhanced interrogation program, he is said to have provided specific information about the courier -- after initially giving "confusing signals" about the individual.

After 9/11, CIA officials say the program provided the "bedrock" understanding of Al Qaeda network and it is still being drawn on today. One former CIA officer told Fox News that once accused Sept. 11 mastermind Khalid Sheikh Mohammed's will was broken, he generated more than 2,000 intelligence reports.

In addition, former CIA officers from the program told Fox News they believe the Senate report seeks to minimize intelligence that led the U.S. to bin Laden's courier.

Another former officer told Fox News that the CIA was encouraged by lawmakers "to do whatever it takes" to prevent another attack on the scale of Sept. 11, 2001. The former officer said that Hill leadership was briefed more than three dozen times before the program was shuttered.

According to the report, the CIA tactics included weeks of sleep deprivation, slapping and slamming of detainees against walls, confining them to small boxes, keeping them isolated for prolonged periods and threatening them with death. Three detainees faced the simulated drowning technique known as waterboarding.

The report detailed sleep deprivation that involved keeping detainees awake for up to 180 hours, "usually standing or in stress positions." It claimed many detainees provided "fabricated information, resulting in faulty intelligence" as a result of these methods.

President George W. Bush approved the program through a covert finding in 2002, but he wasn't briefed by the CIA about the details until 2006. George Tenet, CIA director when the Sept. 11, 2001, attacks occurred, said the program saved "thousands of American lives."

After Al Qaeda operative Abu Zubaydah was arrested in Pakistan, the CIA received permission to use waterboarding, sleep deprivation, close confinement and other techniques. Agency officials added unauthorized methods into the mix, the report says.

At least five men in CIA detention received "rectal rehydration," a form of feeding through the rectum. Others received "ice baths" and death threats. At least three in captivity were told their families would suffer, with CIA officers threatening to harm their children, sexually abuse the mother of one man, and cut the throat of another man's mother.

Zubaydah was held in a secret facility in Thailand, called "detention Site Green" in the report. Early on, with CIA officials believing he had information on an imminent plot, Zubaydah was left isolated for 47 days without questioning, the report says. He wasn't alone. In September 2002, at a facility referred to as COBALT-- understood as the CIA's "Salt Pit" in Afghanistan -- detainees were kept isolated and in darkness. Their cells reportedly had only a bucket for human waste.

However, Secretary of State John Kerry last week asked the Senate Intelligence Committee to "consider" the timing of the release.

The administration's stance was criticized by GOP Sen. Richard Burr, the prospective new chairman of the Senate intelligence committee. Burr, R-N.C., said that Kerry's suggestion that the report be delayed didn't jibe with Earnest's comments.

"It's dumbfounding they can call and ask for it to be delayed and then say they want it out. You can't have it both ways," Burr told Fox News.

U.S. officials have confirmed to Fox News that an advisory has been sent urging U.S. personnel overseas to reassess security measures in anticipation of the release. The message directs all overseas posts, including those used by CIA personnel, to "review their security posture" for a "range of reactions that might occur."

A similar statement was being sent to military combatant commands to assess their readiness. Defense Secretary Chuck Hagel said Tuesday he's ordered all combatant commanders to be on "high alert."