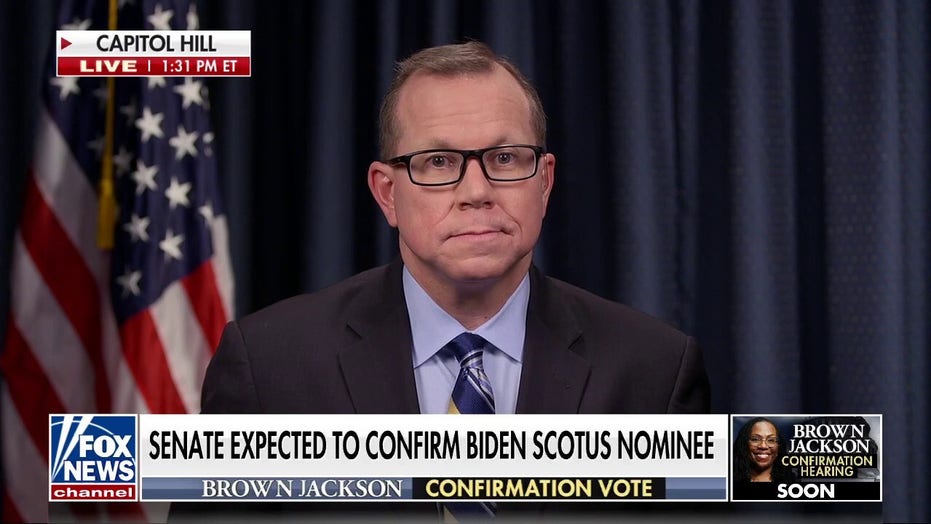 The vote was bipartisan, 53-47, with Republican Sens. Susan Collins of Maine, Lisa Murkowski of Alaska and Mitt Romney of Utah voting for Jackson. The Republican senators previously announced their support for the history-making confirmation saying she is well-qualified. Vice President Kamala Harris presided over the confirmation vote Thursday afternoon.

The back of the Senate chamber was filled with House members from the Congressional Black Caucus who arrived to mark the historic day. With Harris presiding, Second gentleman Doug Emhoff watched the vote in the visitor gallery looking down at the proceedings. Huge applause broke out throughout the chamber after the final tally was gaveled in, including a standing ovation and multiple embraces between Democrats.

The Senate votes at the U.S. Capitol on the nomination of Judge Ketanji Brown Jackson to become a Supreme Court justice Thursday, April 7, 2022. (Senate Television via AP)

Jackson joined President Biden and other White House senior staff in the Roosevelt Room to watch the results of the Senate vote on her nomination to the Supreme Court.

"Judge Jackson’s confirmation was a historic moment for our nation," Biden said on Twitter with a picture of him taking a selfie with the newly confirmed Jackson. "We’ve taken another step toward making our highest court reflect the diversity of America. She will be an incredible Justice, and I was honored to share this moment with her."

Democrats were celebratory and reflective on how Justice Jackson will be remembered in history.

"Seeing Judge Jackson ascend to the Supreme Court reflects the promise of progress on which our democracy rests," Sen. Raphael Warnock, D-Ga., said ahead of the vote. "What a great day it is in America today." 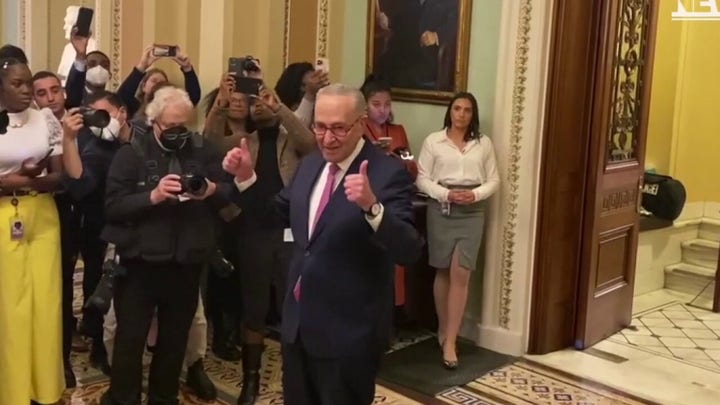 After the successful vote, which was delayed for about 15 minutes when Sen. Rand Paul, R-Ky., was missing from the chamber, a jubilant Schumer exited the Senate with a double thumbs up and a huge smile for the awaiting cameras.

This is an "amazing day not only for Justice Brown Jackson but for the United States of America," Schumer said. On the long road to equality, Schumer said, "sometimes you take a step back, but today we took a giant step forward."

Republicans who opposed Jackson did so on several fronts: her dodging of questions on whether she favors court packing; her inability to define a "woman," insufficient explanation of her judicial philosophy and her "soft on crime" sentencing record, including those of several child pornography offenders.

"Today the far left will get the Supreme Court justice they wanted," Senate Minority Leader Mitch McConnell, R-Ky., said ahead of the vote.

Sen. Ted Cruz, R-Texas, said based on Jackson's record, "I believe she will prove to be the furthest left of any justice to have ever served on the Supreme Court."

Thursday's vote marks the culmination of a rollercoaster confirmation process that included tears at the hearing from Jackson, as well as combative questioning from Sen. Lindsey Graham, R-S.C., and others about her sentencing record as a federal judge.

During two intense days of grilling at the Senate Judiciary Committee hearing, Republicans pressed Jackson about why she gave a handful of child pornography offenders prison time that was less than what prosecutors and sentencing guidelines allowed and accused her of being too lenient on criminals. Jackson defended her record and said her career cannot be defined by a "small subset of my sentences."

In contrast, Democrats praised Jackson's grace under pressure and sought to highlight Jackson's long list of achievements. At some points, senators celebrated how far she's come as a Black woman in America – drawing visible signs of emotion and tears from Jackson.

"I hope to inspire people to try to follow this path," Jackson said at the hearing in a message to young people.

"I want them to know that they can do and be anything. … I would tell them to persevere."

Jackson, 51, is a Harvard Law School graduate and judge on the U.S. Court of Appeals for the District of Columbia Circuit. She previously was a Senate-confirmed federal district court judge, member of the United States Sentencing Commission, a federal public defender and a private attorney at four elite law firms.

Schumer noted that Jackson will also be making history as the "first and only justice with experience as a public defender."

Ketanji Brown Jackson wipes away tears during her confirmation hearing in Washington on March 23, 2022. (Julia Nikhinson/Bloomberg via Getty Images)

Jackson will succeed Justice Stephen Breyer once he retires from the bench at the end of the court's 2021-22 term, which could be late June or early July.

The ideological makeup of the court will remain the same with a 6-3 split in favor of justices appointed by Republican presidents.