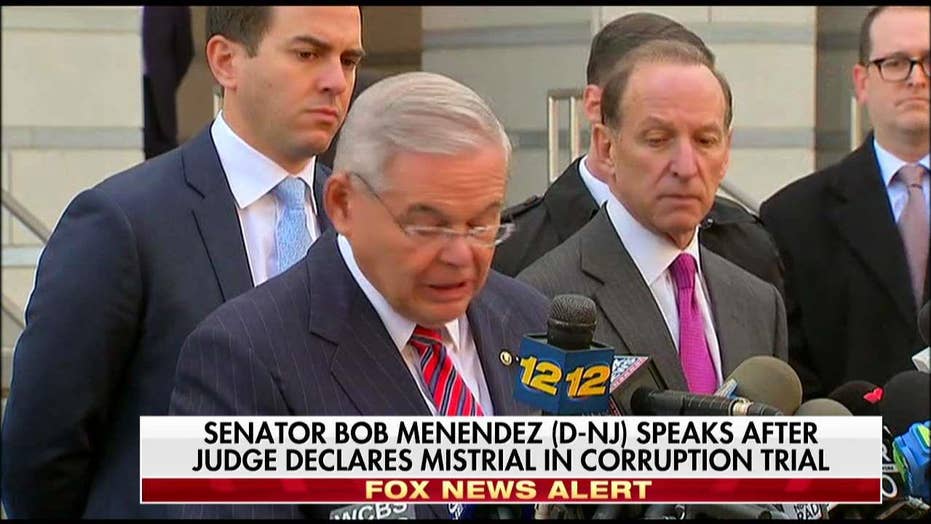 Prosecutors filed a motion with the court to dismiss the case after a trial judge threw out several counts against the longtime New Jersey Democratic lawmaker last week.

“From the very beginning, I never wavered in my innocence and my belief that justice would prevail,” Menendez said in a statement. “I am grateful that the Department of Justice has taken the time to re-evaluate its case and come to the appropriate conclusion.”

Earlier this month, the DOJ said it had intended to retry Menendez, who is up for re-election this year, after a federal judge declared a mistrial in the high-profile bribery case in November.

In that case, U.S. District Court Judge William Walls said there was “no alternative to declaring a mistrial.”

The mistrial was seen as a major victory for Menendez and a blow to the Justice Department, whose efforts to go after politicians in recent years have not been successful.

Outside the courthouse after the mistrial, an emotional Menendez made clear that he would be out for political vengeance.

"Certain elements of the FBI and of our state cannot stand, or even worse, accept that the Latino kid from Union City and Hudson County could grow up to be a United States senator and be honest," said the 63-year-old son of Cuban immigrants.

Norris told reporters that 10 people on the jury wanted to acquit Menendez of all charges while two held out for conviction.

The mistrial brought an inconclusive end to the two-and-a-half month trial.

Menendez is up for re-election to the U.S. Senate this year.

Senate Majority Leader Mitch McConnell has called on the Ethics Committee to investigate Menendez for possible violations of the public trust and the Senate code of conduct.

The case against Menendez marked the first time in almost a decade that a sitting U.S. senator faced a federal bribery charge.

According to the criminal complaint, Menendez greased wheels for Salomon Melgen, a Florida ophthalmologist.

The defense argued that the gifts were not bribes, but tokens of friendship between two men who were "like brothers."

The Menendez case was the first major federal bribery trial since the U.S. Supreme Court in 2016 threw out the conviction of Republican former Gov. Bob McDonnell of Virginia and narrowed the definition of bribery.