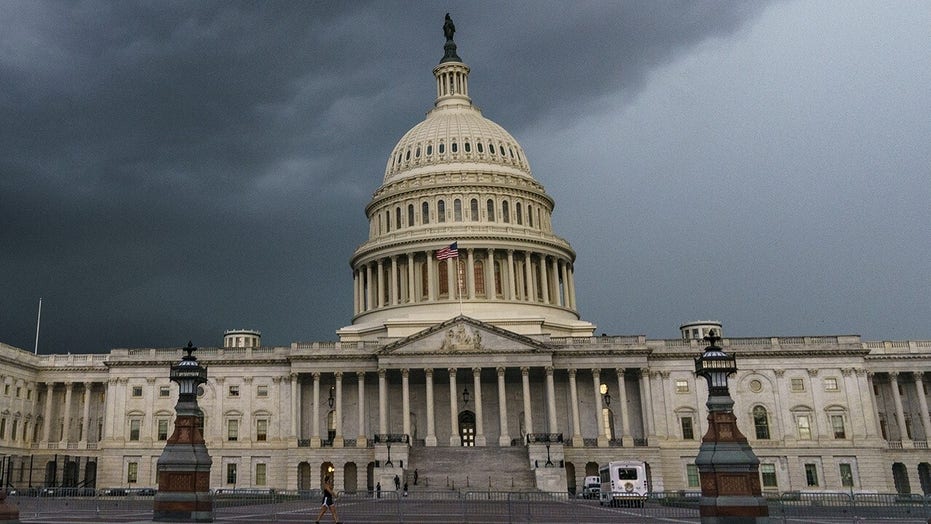 US faces government shutdown amid stalemate in Congress over coronavirus relief

Sen. Ben Sasse, R-Neb., is suggesting a bold proposal for how to calm the raging political atmosphere while making Washington run more efficiently in the process: remove cameras from Senate committee hearings.

Hearings are ostensibly meant as fact-finding missions to advance legislative goals, but Sasse claims that in reality his colleagues have little to no interest in what witnesses have to say and use the time in front of the camera to push their own political agendas.

Sasse noted that much of the work done by the Senate Intelligence Committee is done without cameras present, and there he sees Republicans and Democrats working together toward common goals instead of engaging in partisan bickering, which regularly takes place in televised hearings held by other committees.

Those hearings regularly make headlines, such as when Justice Department Inspector General Michael Horowitz went before the Senate Judiciary Committee to discuss his bombshell report on the FBI’s use of the Foreign Intelligence Surveillance Act (FISA) in the Russia investigation, as well as a number of contentious hearings on federal judicial nominations.

Getting rid of the video feeds was just one Sasse’s proposals for sweeping Senate reform that he discussed in a recent Wall Street Journal op-ed. Others included limiting senators to just one term but extending it to 12 years, and repealing the 17th Amendment so that senators are chosen by state legislatures instead of elected by the people.

Sasse discussed the camera issue in greater detail in written responses to questions from Fox News:

Q: You proposed removing cameras from committee hearings. Some may believe that the ability to watch hearings gives the public a window to the legislative process. Why would removing this access be better in the long run?

Sasse: The Senate can’t be the world’s greatest deliberative body if it doesn’t deliberate. The Senate is supposed to be devoted to thinking carefully about the country’s long-term future. Instead, we’re devoted to CNN soundbites and Twitter retweets. The average Senate committee hearing today is a theater competition; whoever puts on the best show wins. The incentive structure around the Senate is upside-down. Short-term posturing is rewarded, and long-term problem-solving is penalized.

The House and Senate have different, and complementary, jobs. The House of Representatives is supposed to be loud and fast while the Senate is supposed to be deliberative and slow. We shouldn’t have just one or the other, we need both. Senators are supposed to be asking each other difficult questions, making and challenging each other’s arguments, and deliberating thoughtfully about issues of national importance. That’s impossible when everyone is playing to the cameras. We need to create conditions where substantive and candid conversations can take place.

Let’s be clear, too: Eliminating cameras does not mean eliminating transparency. That’s a false choice. We can ensure the public’s right to real, radical transparency through readily available audio recordings and written transcripts.

Q: The Senate Intelligence Committee, of which you are a member, holds many of its hearings behind closed doors. How is the nature of those hearings different from, say, the Senate Judiciary Committee, which is regularly on camera?

Sasse: Behind the doors of the Senate Intelligence Committee, you won’t spot any of the usual posturing and performing. Senators talk frankly and forthrightly, and we find ourselves able to reach agreements on what challenges the country faces in this area. When we bring in experts, Senators ask actual questions of them and listen to their answers, instead of flogging them for the cameras or trying to outsmart them. It’s people talking to other people, and trying to work through problems together.

By contrast, take a look at what a complete and total fiasco the Senate Judiciary’s Supreme Court nomination hearings have become. It’s just a matter of course now that every Supreme Court confirmation hearing is going to be an overblown, politicized circus. No one learns a thing about the nominee, and the Constitution is relegated to an afterthought. Senators just browbeat their opponents until the clock runs out, and the most enduring consequence by the end of it is that the whole nation is less informed and more angry.

Curiously enough, one place you’ll find genuine, no-pretense discussion around Capitol Hill these days is the Senate Gym. The fact that honest, good-faith interactions drop away when Senators head to committee rooms or the Senate floor is a pretty good indicator of just how dysfunctional the institution has become.

Q: High-profile hearings that touch on hot-button political issues often feature combative exchanges between senators and witnesses, or even between senators. Do you believe these moments help the public by allowing their elected officials to voice the concerns of their constituents, or do they worsen the increasingly heated and polarized nature of current political discourse?

Sasse: The dirty little secret of so many headline-grabbing political moments these days is that they’re about as “authentic” as reality television. We need real debate, not staged lookalikes.

First, let’s commit to real, radical transparency, through immediately available audio recordings and transcripts. No one should find themselves boxed out of the legislative process.

Second, let’s return to having real debates on the Senate floor. One of the things that cameras have done is eliminated meaningful, in-person exchanges. When Senators go to the floor to speak today, they almost always do so to an empty room; they’re just speaking into the camera. How are we supposed to have a meaningful exchange of ideas, when the Senate is just one person alone in a room? Let’s start packing the floor again, and have Senators talk to each other, face-to-face. That’s what the Senate floor is there for. I’m not calling for kumbaya nonsense – Senators ought to fight hard for our positions, but we ought to have a good-faith fight without the showboating.

Q: Removing cameras may eliminate the incentive for senators to play to an audience, but is there concern that the public may end up being less informed as a result?

Sasse: As the Senate has become less deliberative and more performative, meaningful public understanding of and engagement in the legislative process has fallen off.

Right now, most politics is an exercise in red jerseys versus blue jerseys, and being “well-informed” typically means having an arsenal of memes to post to Twitter and Facebook. But politics isn’t Wrestlemania. Self-government means sober deliberation, open and honest debate, and good-faith effort to tackle problems.

Q: Do you think that there are senators who grandstand during hearings because they feel it is expected of them? Would they be relieved if cameras were removed?

Sasse: Some small set of folks like the posturing and playacting and Twitter wars. But most are frustrated and exhausted. They know the Senate is dysfunctional, and they wish it weren’t. The problem, though, is that when it comes to making changes, all the incentives seem to run the wrong way. It looks too costly to stick one’s neck out on behalf of the institution. But if you talk to them away from the cameras, they know the Senate is not doing what it was created to do.

I’ve heard from some of my colleagues since the WSJ essay was published. They have quibbles and disagreements, here and there. But most of them have made clear that the fundamental point is dead-on: We have a deeply dysfunctional body, and it’s a loss to the country that the Senate doesn’t work. But it doesn’t have to be that way. Now is the time for out-of-the-box ideas. Once upon a time, the Senate was the world’s greatest deliberative body. Let’s make it great again.