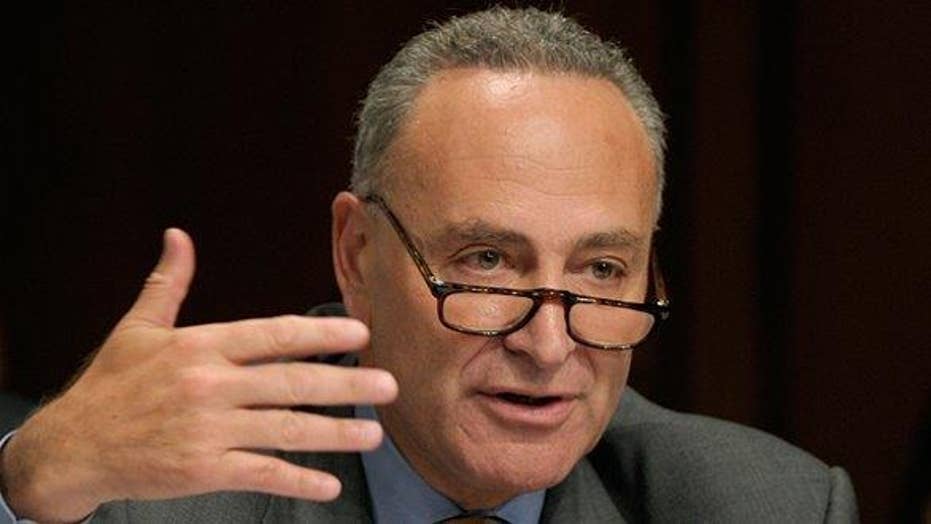 Democrats on Thursday responded to reports that President Trump authorized a cruise missile strike on an airbase in Syria, and the reaction appeared to be mixed.

"I support the administration's strike on the air base that launched the chemical attack. I hope this teaches President Assad not to use chemical weapons again," Sen. Bill Nelson, D-Fla., said.

Trump’s quick action was in response to the chemical attack that left as many as 72 civilians dead, including woman and children.

Sen. Tim Kaine, D-Va., and former vice presidential candidate, issued a statement: “Congress will work with the President, but his failure to seek Congressional approval is unlawful.”

The statements came as the U.S. launched 59 Tomahawk missiles targeted at an airbase at Shayrat. The attack was targeted at the airstrips, hangars, control tower and ammunition areas in the base, officials said.

Please see my statement following the US military strike in Syria: pic.twitter.com/MmiFY1LNxS

Sen. Ben Cardin, D-Md., also commented on the importance of Congressional approval, saying, "Any longer-term or larger military operation in Syria by the Trump Administration will need to be done in consultation with the Congress."

“This week’s unspeakable chemical weapons attack is only the latest in a long series of horrors perpetrated by Bashar al-Assad on innocent men, women and children,” Democratic House Minority Leader Nancy Pelosi said in a statement issued on the attacks in Syria. “Tonight’s strike in Syria appears to be a proportional response to the the regime’s use of chemical weapons. If the President intends to escalate the U.S. military’s involvement in Syria, he must to come to Congress for an Authorization for Use of Military Force which is tailored to meet the threat and prevent another open-ended war in the Middle East.”

Senate Minority Leader Chuck Schumer, D-N.Y., said in a statement that, "making sure Assad knows that when he commits such despicable atrocities he will pay a price is the right thing to do."

"It is incumbent on the Trump administration to come up with a strategy and consult with Congress before implementing it. I salute the professionalism and skill of our Armed Forces who took action today," Schumer added.

While most came out in support of the strike, Rep. Tulsi Gabbard, D-HI, released a statement on Thursday condemning the attack.

Trump’s military strikes in Syria are reckless and short-sighted. -TGhttps://t.co/xM2NMwIgHF

“It angers and saddens me that President Trump has taken the advice of war hawks and escalated our illegal regime change war to overthrow the Syrian government,” Gabbard said, adding that, “this escalation is short-sighted and will lead to more dead civilians, more refugees, the strengthening of al-Qaeda and other terrorists, and a direct confrontation between the United States and Russia—which could lead to nuclear war.”

Gabbard said the Trump administration had “acted recklessly without care or consideration of the dire consequences of the United States attack on Syria without waiting for the collection of evidence from the scene of the chemical poisoning.”

Sen. Elizabeth Warren, D-Mass., member of the Senate Committee on Armed Services, condemned the Syrian chemical attacks, saying their “actions underscore why the United States should embrace innocent people who are fleeing in terror.”

“The Constitution gives the power to authorize the use of military force to the legislative branch. Expanded military intervention in Syria requires action by Congress,” Warren said in a statement on the U.S. strikes on Syria. “If President Trump expects such an authorization, he owes the American people an explanation of his strategy to bring an end to the violence in Syria. We should not escalate this conflict without clear goals and a plan to achieve them.”