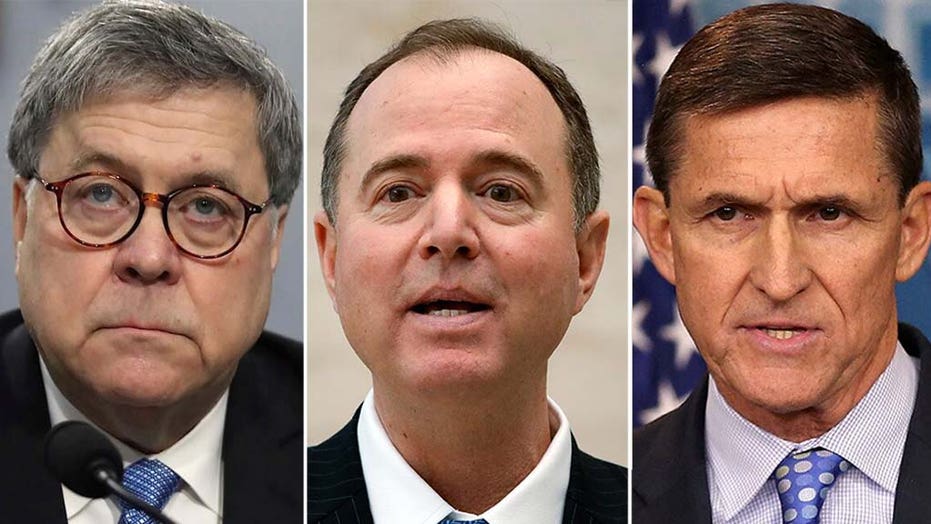 House Intelligence Committee Chairman Adam Schiff, D-Calif., slammed the head of the Justice Department (DOJ) Thursday after he announced that the case of former National Security Adviser Michael Flynn will be dropped.

"This dismissal does not exonerate him," Schiff said of Flynn, who pleaded guilty to lying to the FBI back 2017 about his Russian contacts. "But it does incriminate Bill Barr."

Attorney General William Barr was briefed by U.S. Attorney Jeff Jensen, who was presiding over the Flynn case, last week before formalizing the decision.

The announcement came in a court filing "after a considered review of all the facts and circumstances of this case, including newly discovered and disclosed information," the DOJ said, referring to newly released internal memos from the FBI that raised questions about the motives behind the investigation, which led to Flynn's guilty plea.

DOJ officials said they concluded that Flynn's interview by the FBI was "untethered to, and unjustified by, the FBI's counterintelligence investigation into Mr. Flynn" and that the interview was "conducted without any legitimate investigative basis."

Schiff, who presided over the impeachment investigation against President Trump, called Flynn's dismissal "the worst politicization of the Justice Department in its history."

New attorneys for Flynn aggressively pushed for his plea to be overturned, championing the narrative that he was pressured by the FBI, who gathered information on him through wiretaps that exposed his contact with then-Russian ambassador Sergey Kislyak in December 2016, despite his denial of it. Attorneys for Flynn also raised red flags about questionable conduct by law enforcement officials and the prosecution.

Other top Democrats on the House Judiciary Committee also blasted Barr on Thursday, with Chairman Jerrold Nadler, D-N.Y., calling for an "immediate explanation" into his decision and promising to go forth with a prescheduled hearing with Barr that was postponed due to the coronavirus pandemic. Nadler also alluded to an investigation by the Inspector General.