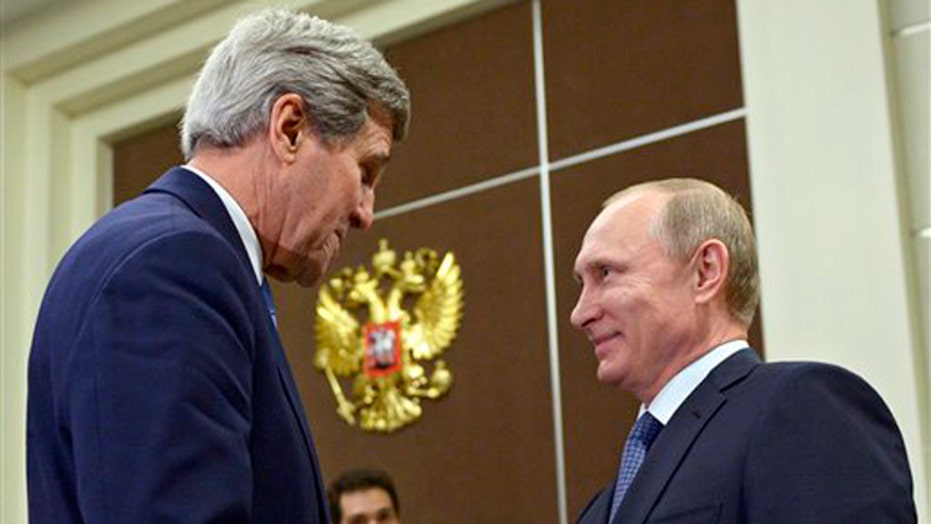 On his first trip to Russia since the Ukraine crisis began, Kerry held more than four hours of talks with Russian Foreign Minister Sergey Lavrov at a hotel in the Black Sea resort of Sochi before seeing Putin at his presidential residence in the city. Putin is in Sochi meeting with Russian defense officials for a week.

Three hours into the Kerry-Putin meeting, Russia's Foreign Ministry issued a statement saying that Kerry and Lavrov had a "long and sincere conversation on a broad range of issues."

But the statement echoed the defiant tone of earlier ministry comments that blamed Washington for strains in relations and said Moscow would not back down on matters critical to its national interests.

"Sergey Lavrov noted that we aren't to blame for the current crisis in relations with Washington," the statement said. "Russia is ready for constructive cooperation with Washington both on bilateral issues and on global arena, where our countries bear special responsibility for the global security and stability. However, cooperation is only possible on an honest and equal basis, without attempts at diktat and enforcement."

The statement added that additional sanctions pressure on Russia would result only in continued deadlock because "Russia will not be forced to compromise on its national interests and its principled stance on the issues it considers as key for itself."

Both Washington and Moscow insist that all sides to the Ukraine crisis comply with an increasingly fragile ceasefire agreement but differ widely as to who violated it.

Kerry had planned to test Putin's willingness to press pro-Russia separatists in Ukraine to comply with the ceasefire.

Kerry was also seeking to gauge the status of Russia's support for embattled Syrian President Bashar Assad, whose forces have been losing ground to rebels, and urge Moscow to support a political transition that could end that war. On that issue, the Russian statement said only that it is "necessary to continue efforts to launch a full-fledged political dialogue between official Damascus and the opposition."

In addition, Kerry was to make the case to Putin that Russia should not proceed with its planned transfer of an advanced air defense system to Iran. The Russian statement was silent on that.

Relations between Washington and Moscow have plummeted to post-Cold War lows amid the disagreements over Ukraine and Syria.

Putin's spokesman Dmitry Peskov told reporters in Sochi on Tuesday that Russia welcomed Kerry's visit but stressed that "Russia never initiated the freeze in relations and we are always open for displays of political will for a broader dialogue."

The rhetoric signaled there would be few breakthroughs if any. Nevertheless, both sides stressed the importance of trying to work through some of the rancor that buried President Barack Obama's first-term effort to "reset" ties with Moscow.

Kerry began his short visit to Sochi by laying a wreath at a World War II memorial with Lavrov, with whom Kerry has had a warm personal relationship.

Lavrov presented Kerry at a working lunch with tomatoes and potatoes that were "distant" descendants of two Idaho potatoes that Kerry gave him last year, a spokeswoman for Lavrov said. For his part, Kerry "presented the Russian side with a list of quotations from the Russian media that in his view don't reflect the real potential of broad Russian-American relations, which he is convinced need to be improved," spokeswoman Maria Zakharova wrote on her Facebook page. U.S. officials said Kerry had given a leather writing portfolio.

Improving ties, however, hinges largely on violence decreasing in Ukraine.

The Western-backed government in Kiev continues to be embroiled in a sporadic conflict with separatist forces despite a ceasefire agreement sealed in mid-February. Russia was a party to that deal.

Western nations say Russia supports the separatists with arms and manpower, and even directs some battlefield operations -- all claims Moscow denies. In return, the Russians bristle at Washington's provision to Ukraine of military assistance in the form of hardware and training.