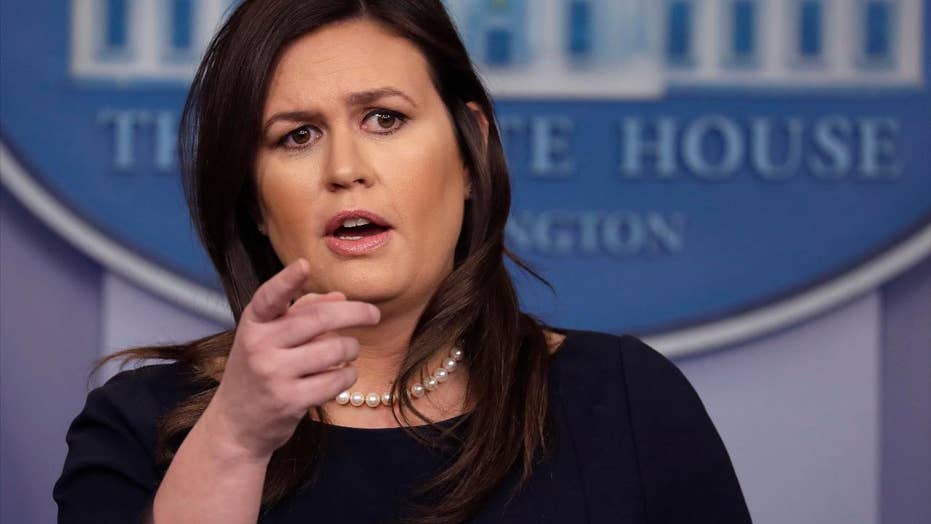 Sanders:It's a shame Democrats are having such a hard time condemning Rep. Omar's comments

The exchange was prompted after NBC’s Hallie Jackson initially asked Sanders if Trump truly believes that “Democrats hate Jews,” following Trump's declaration last week that Democrats are "anti-Israel" and "anti-Jewish." The White House press secretary declined to answer directly, noting that the president has laid out his position on the matter in the past.

“Democrats have had a number of opportunities to condemn specific comments and have refused to do that,” Sanders said, referring to the ongoing controversy surrounding Rep. Ilhan Omar for making allegedly anti-Semitic remarks.

Sanders eventually called on Acosta, whom she has feuded with on a regular basis during past press briefings.

CNN’s chief White House correspondent opened with a question about whether Trump tried to block AT&T’s merger with Time Warner. After Sanders said she was not aware of any such conversation, Acosta circled back to the situation with “Democrats and Jewish people,” asking if Trump’s rhetoric is “beneath” the American people.

“Do you think that the president has thought, at all, going into the 2020 campaign that the rhetoric just needs to be lowered? Whether it’s talking about Democrats, the media, immigrants, or should we just plan on hearing the president use the same kind of language that we heard in 2016 and all through the first couple years of this administration?” Acosta asked.

“I think that is a great shame,” Sanders said. “The president has been clear on what his position is, certainly what his support is for the people and the community of Israel.”

Acosta then asked if it “drags down the rhetoric of a debate” when someone says something that is “patently untrue.” Sanders tried to answer, and the CNN correspondent continued to talk over her.

Sanders told Acosta that Democrats should call out their members by name if they don’t want to be aligned with anti-Semitic rhetoric. Acosta tried to respond, but Sanders cut him off.

“Sorry, Jim,” she said before calling on the next reporter.

Acosta asked his question anyway, reminding Sanders that Trump once said there were “very fine people” on both sides of the violent white supremacist rally in Charlottesville, Virginia.

“Essentially suggesting that there were very fine people in the Nazis,” Acosta said.

Sanders fired back, “That’s not at all what the president was stating.”

“The president has been incredibly clear in consistently and repeatedly condemning hatred, bigotry and racism in all of its forms, whether it’s in America or anywhere else. To say otherwise is simply untrue,” Sanders said.

Acosta’s press pass was restored on Nov. 19 after CNN argued that keeping him out of the White House violated the network and Acosta’s First and Fifth Amendment rights. To coincide with Acosta being allowed to return to the White House, Sanders implemented a series of rules to govern White House press conferences going forward.

Last month, Acosta was scolded by Trump during a Rose Garden announcement and was subsequently confronted by angel moms in attendance.