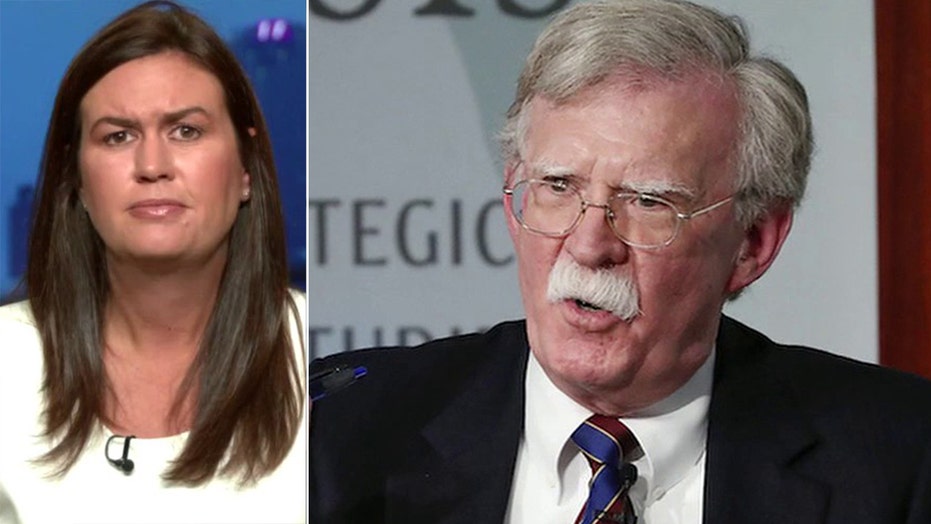 Sarah Sanders: Bolton was 'completely drunk on power' in White House, is a 'disgrace to the country'

Sanders, a Fox News contributor, shared a scathing passage pertaining to Bolton -- who has made waves with his own memoir skewering President Trump -- in a lengthy Twitter thread Monday morning.

“Full excerpt from my forthcoming book 'Speaking for Myself,' about John Bolton, a man drunk on power who ultimately betrayed America when he didn’t get his way,” Sanders tweeted.

The excerpt claimed Bolton on many foreign trips “had a separate agenda and often arrived and departed on a different plane because he didn’t want to travel on Air Force One with the rest of us.”

“Bolton apparently felt too important to travel with the rest of us. It was a running joke in the White House,” the excerpt said.

Sanders went on to detail one instance when the administration visited the United Kingdom, noting that multiple members of the president’s Cabinet boarded a bus, including Treasury Secretary Steven Mnuchin, then-acting chief of staff Mick Mulvaney, Deputy Chief of Staff Dan Walsh and other senior advisers.

“Based on US protocol, Mnuchin, Mulvaney and Walsh all outranked Bolton. Mnuchin, one of the highest ranking officials in government, far outranked him,” she wrote. “We waited at the hotel but there was no sign of Bolton or his motorcade. After a while we gave up and headed to the Winfield House to meet the president.

“While en route, UK police directed us to pull to the side of the road because someone was coming through…we looked over to see who it was and sure enough here came Bolton and his motorcade,” she wrote. “We waited and watched as Bolton sped by us and left us in the dust.

“The discussion on the bus quickly moved from casual chit chat to how arrogant and selfish Bolton could be, not just in this moment but on a regular basis,” she continued. “If anyone on the team should have merited a motorcade it was Mnuchin, but he was a team player.

She added: “Bolton was a classic case of a senior White House official drunk on power, who had forgotten that nobody elected him to anything.”

Sanders wrote that Bolton often “acted like he was the president, pushing an agenda contrary to President Trump’s.”

Meanwhile, Sanders went on to say that Mulvaney, upon arriving at the Winfield House, confronted Bolton and “unleashed a full Irish explosion on him.”

“He lit into him in a way I hadn’t seen him do to anyone before,” she wrote. “Mick made clear he was the chief of staff and Bolton’s total disregard for his colleagues and common decency was unacceptable and would no longer be tolerated. ‘Let’s face it John,’ Mick said. ‘You’re a f—— self-righteous, self-centered son of a b——!’”

She added: “That epithet really didn’t have much to do with the motorcade, but was the culmination of months of Bolton thinking he was more important and could play by a different set of rules than the rest of the team. Bolton backed down and stormed off.”

“The rest of us looked on and nodded in approval, proud of Mick for standing up for us. Mick even got a few high fives from officials thrilled someone had put Bolton in his place,” she wrote.

Sanders shared the excerpt from her book amid a legal battle between the White House and Bolton over the release of his memoir, “The Room Where It Happened.”

A federal judge on Saturday allowed Bolton’s memoir to be released, despite concerns it contains classified information, but tore into the former national security adviser for having “gambled” with national security.

The Justice Department had sought an injunction and a temporary restraining order to prevent the release of "The Room Where It Happened" on June 23, saying that the book contained classified information and that Bolton had deliberately bypassed the necessary classification review process that he had agreed to.

“In exchange for money, he has broken that promise,” David Morrell, deputy assistant attorney general, said in a hearing Friday. “The obligation lies on him to bring his book in line with the contractual obligations he assumed.”

But Bolton’s team has claimed that the administration is just trying to suppress embarrassing information about Trump’s conduct.

"We are grateful that the Court has vindicated the strong First Amendment protections against censorship and prior restraint of publication," Adam Rothberg, Simon & Schuster's senior vice president of corporate communications, said in a statement. "We are very pleased that the public will now have the opportunity to read Ambassador Bolton’s account of his time as National Security Advisor.”