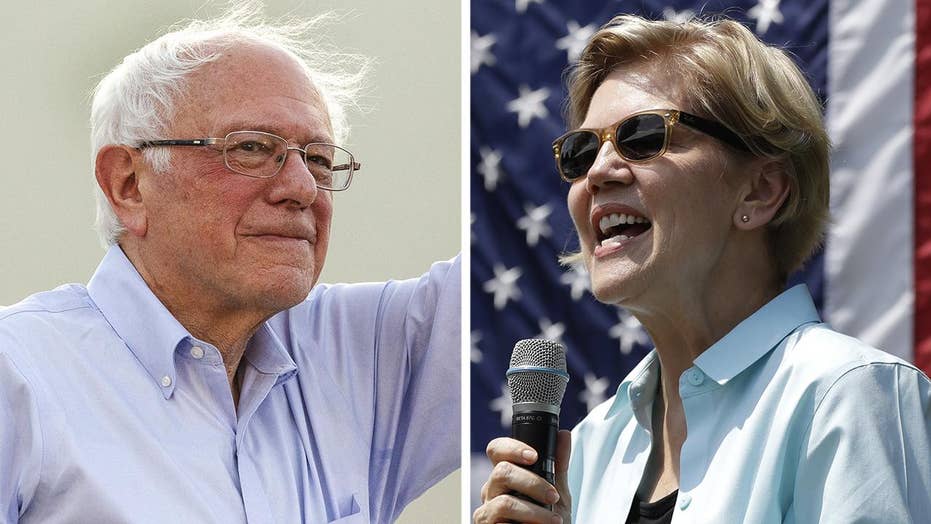 Progressive Senators Bernie Sanders and Elizabeth Warren will share the debate stage for the first time in the 2020 primary race; Kristin Fisher reports from Detroit with a preview.

On the roster: Sanders, Warren vs. Everyone else - Biden bounces back after first debate slump - Treasury to raise federal borrowing estimate - Poll: Half of voters think the president is racist - Electrolytes ≠Real lights

SANDERS, WARREN VS. EVERYONE ELSE
ABC News: “Two progressive powerhouses will be center stage for night one of the second Democratic debate on Tuesday. The party will be watching for Sen. Bernie Sanders and Sen. Elizabeth Warren to mix it up, knowing that they're treading in the same ideological territory. But the two New England senators are longtime allies who don't actually disagree on very much. The real action in Detroit could come from podiums closer to the wings, where a group of relative moderates -- including several who are unlikely to qualify for future debates, minus a big splash -- stand ready to bring the fight. If the Michigan backdrop wasn't enough, Tuesday night's lineup offers a virtual tour of challenging places for Democrats to win. Among those joining Sanders and Warren on stage: Indiana's Pete Buttigieg, Minnesota's Amy Klobuchar, Texas' Beto O'Rourke, Montana's Steve Bullock, Ohio's Tim Ryan and Colorado's John Hickenlooper. A showdown between Sanders and Warren for the progressive mantle may be inevitable. But that doesn't make it immediate, with potential disagreements on display not necessarily among the front-runners, but between them and the rest.”

Will their truce be strong enough? - Politico: “The candidates themselves have largely kept things cordial. But signs of tension have trickled out. As Warren’s poll numbers ticked up, Sanders staffers took digs at her on Twitter for not participating in a Fox News town hall, while suggesting her rise was a manufactured media narrative. … In the weeks after, some of the tweets were deleted and aides said Sanders made it clear he did not condone attacking Warren. … CNN moderators will undoubtedly try to goad them into conflict [tonight], but both candidates have signaled they will do their best to resist. … Based on conversations with their advisers, it's more likely the candidates will face off against the more moderate candidates onstage than against each other.”

BIDEN BOUNCES BACK AFTER FIRST DEBATE SLUMP
Quinnipiac University: “Former Vice President Joseph Biden reverses his slump following the first Democratic presidential debate and now leads the pack with 34 percent of Democrats and independent voters who lean Democratic, according to a Quinnipiac University National Poll released today. Massachusetts Sen. Elizabeth Warren has 15 percent, with 12 percent for California Sen. Kamala Harris and 11 percent for Vermont Sen. Bernie Sanders. This compares to results of a July 2 survey by the independent Quinnipiac University National Poll, showing Biden with 22 percent, Harris with 20 percent, Warren with 14 percent and Sanders with 13 percent.  … Rounding out the Democratic field are South Bend Mayor Pete Buttigieg with 6 percent, and former U.S. Rep. Beto O'Rourke and entrepreneur Andrew Yang with 2 percent each. There are four candidates with 1 percent each and 14 candidates at less than 1 percent each.”

Biden, Sanders attack new Harris health care plan - Fox News: “Hours after White House candidate Sen. Kamala Harris unveiled her plan to push the country towards a government-backed ‘Medicare-for-all’ health care system over the next decade, the California Democrat faced incoming fire from two of her top rivals for their party’s 2020 presidential nomination. The campaign of Sen. Bernie Sanders of Vermont slammed the Harris proposal, saying, ‘call it anything you want, but you can’t call this plan Medicare for All.’ And, former Vice President Joe Biden’s team called the Harris plan a ‘have-it-every-which-way approach’ that ‘both backtracks on her long-promised – but then-hedged – support of Bernie Sanders' Medicare for All legislation.’ … The Harris plan appeared to stake a middle ground between Sanders’ ‘Medicare-for-all’ proposal and the public option to enhance ObamaCare that Biden has proposed.”

THE RULEBOOK: HELPFUL HINTS
“A good government implies two things: first, fidelity to the object of government, which is the happiness of the people; secondly, a knowledge of the means by which that object can be best attained.” – Alexander Hamilton or James Madison, Federalist No. 62

TIME OUT: A SWEET GAME
Atlantic: “If you were a child at some point in the past 70 years, odds are you played the board game Candy Land. According to the toy historian Tim Walsh, a staggering 94 percent of mothers are aware of Candy Land, and more than 60 percent of households with a 5-year-old child own a set. The game continues to sell about 1 million copies every year. … What makes it so appealing? The answer may have something to do with the game’s history: It was invented by Eleanor Abbott, a schoolteacher, in a polio ward during the epidemic of the 1940s and ‘50s. The outbreak had forced children into extremely restrictive environments. Patients were confined by equipment, and parents kept healthy children inside for fear they might catch the disease. Candy Land offered the kids in Abbott’s ward a welcome distraction—but it also gave immobilized patients a liberating fantasy of movement.”

TREASURY TO RAISE FEDERAL BORROWING ESTIMATE
WSJ: “Borrowing by the federal government is set to top $1 trillion for the second year in a row as higher spending outpaces revenue growth and concern about budget deficits wanes in Washington and on Wall Street. The Treasury Department said Monday it expects to issue $814 billion in net marketable debt in the second half of this calendar year, bringing total debt issuance to $1.23 trillion in 2019. That would represent a slight decline from borrowing in 2018, when the Treasury issued $1.34 trillion in debt—more than twice as much as the $546 billion it issued in 2017. The budget gap for the fiscal year that ends Sept. 30 is on course to exceed $1 trillion, following the 2017 tax cuts that constrained federal revenue and a previous two-year budget deal that raised spending nearly $300 billion above spending caps Congress enacted in 2011. The new budget agreement congressional leaders announced last week effectively pushed the issue of government spending off until after the 2020 election.”

Tyler Cowen: RIP rational debate about the federal budget - Bloomberg: “Apparently, U.S. politics are now so polarized, rational conversation about the federal budget is no longer possible. Last week, the House of Representatives approved a two-year budget deal that stands to boost spending by $320 billion, significantly expanding the deficit. Yet commentators have not been able to articulate a coherent response — no matter which political side they’re on. Democrats seem not to recognize that the spendthrift budget is similar to the kind of fiscal policy they were recommending before Trump’s election. The common claim, voiced by partisans from Lawrence Summers to Paul Krugman, was that the economy had entered a new era of long-term ‘secular stagnation’ and deficient demand. Left-leaning economists called for more government spending and higher budget deficits, and that is what we are getting now, albeit with a suboptimal level of infrastructure spending.”

Sen. Shelby finalizing fiscal 2020 bills - Roll Call: “Senate Appropriations subcommittee leaders are likely to learn within the next week how much they have to spend on their fiscal 2020 bills. Senate Appropriations Chairman Richard C. Shelby, R-Ala., said Monday he hopes to finalize the 12 subcommittee allocations by the end of this week or early next week. ‘We’re working on it now, but they will come later in the week or the first of next week,’ Shelby said. … He has, however, said for weeks that he hopes to mark up the fiscal 2020 Defense measure the first week lawmakers are back in Washington following the August recess. He has also expressed hope that negotiators might pair the Defense spending bill with the Labor-HHS-Education spending bill, which proved successful last year and became law before the end of the fiscal year Sept. 30.”

But the majority don’t favor impeachment - Quinnipiac University: “Voters say 60 - 32 percent that Congress should not begin impeachment proceedings against Trump. Support for starting impeachment proceedings is 61 - 29 percent among Democrats and 66 - 23 percent among black voters, but every other listed party, gender, education, age and racial group is opposed. Still, voters say 52 - 40 percent that Trump attempted to ‘derail or obstruct’ the investigation into the 2016 election and say 56 - 31 percent that the Mueller Report did not clear the president of any wrongdoing. A total of 71 percent of American voters are ‘very concerned’ or ‘somewhat concerned’ that a foreign government may try to interfere in the 2020 elections.”

AUDIBLE: SURE…
“People are so invested in creating this false narrative about me as the ‘crystal lady,’ ‘wacky new-age nutcase.’ If you really think about it, I must be doing something right that they’re so scared.” – Democratic presidential candidate Marianne Williamson told Hill.TV during an interview.

ELECTROLYTES ≠ REAL LIGHTS
WIBW: “A Colorado driver gets an A for effort in his clever attempt to replace a broken tail light with a red sports drink. The driver was on his way to get the light fixed when officers stopped him in Longmont, 38 miles north of Denver, authorities said. ‘While we appreciate the ingenuity of this tail light, this is not a permanent solution. Working tail lights prevent accidents,’ Longmont Police posted on Facebook. ‘If your tail lights are broken, please get them repaired.’ Officials say officers didn't ticket the driver, who was seen repairing his car later that day. According to state law, vehicles must have a red tail light that can be seen at least 100 feet away during the day.”

AND NOW, A WORD FROM CHARLES…
“In everything—talent, imagination, writing, indeed, curiosity—[Thomas] Jefferson was prodigious, Continental and, hence, supremely American.” – Charles Krauthammer (1950-2018) writing in Time magazine on May 22, 2000.