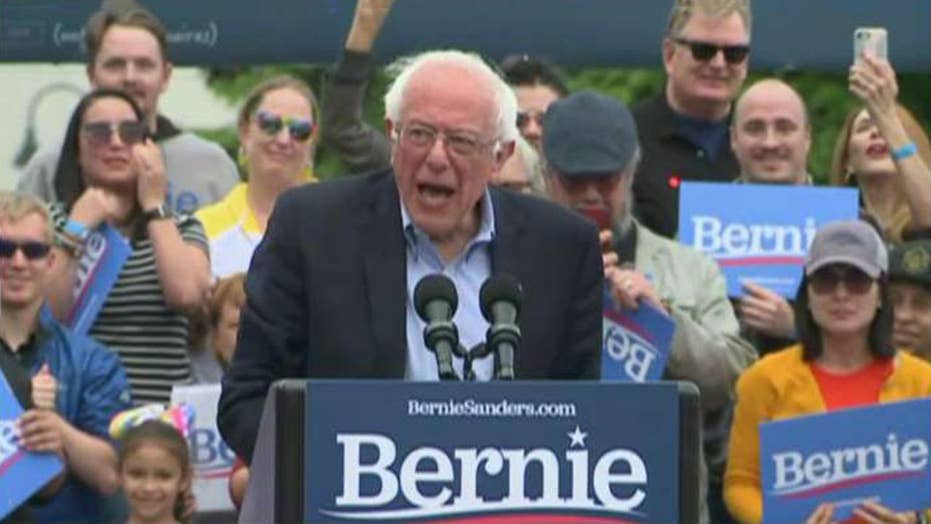 Bernie Sanders not slowing down after heart attack

DNC communications director Xochitl Hinojosa says Bernie Sanders is using his heart attack as a messaging moment to talk about the importance of health care.

In part of a plan to reign in "corporate greed" released by his campaign Monday, Sanders would create a new agency within the Department of Commerce called the "Bureau of Corporate Governance." It would issue charters to large companies requiring them to base their actions on more than just the interest of shareholders. The plan would apply to corporations with more than $100 million in annual revenue or balance sheet total and to all publicly traded companies.

That is a significantly lower threshold than the $1 billion bar for annual revenue Warren pushed earlier this year in a proposal that called for a similar bureau to be created called the "Office of United States Corporations."

"This new federal charter will require corporate boards to consider the interests of all of the stakeholders in a company," the post on Sanders' campaign website says, "including workers, customers, shareholders, and the communities in which the corporation operates."

Sanders, a self-identified democratic socialist, has long railed against big business and capitalism in general, and his newest proposal seeks to use the government to mandate that companies take into account how their behavior affects "society at large."

In another attempted one-up of Warren, Sanders' plan would require public companies and corporations with more than $100 million in annual revenue or balance sheet total to have employees elect 45 percent of their boards of directors. A Warren plan would require just 40 percent of such boards to be elected by employees and would apply to companies with $1 billion or more in yearly revenue.

During a Sunday interview with ABC's "This Week", Sanders slammed Warren for previously saying she is a "capitalist through her bones."

Sanders has battled with Warren for room in the progressive lane of the 2020 Democratic primary, with both seeking to provide a liberal alternative to former Vice President Joe Biden. Biden pitched himself to voters as a moderate compared to the rest of the Democratic field but could be a more vulnerable frontrunner than at any point in the campaign as he's been wrapped up in the impeachment inquiry into President Trump.

After a heart attack earlier this month, Sanders will strive for a successful debate Tuesday, which could mollify some Democrats' fears about the 78-year-old's health.

"This year, the Business Roundtable released empty words recognizing the error in admitting corporations put profits and shareholder returns above everything else. Empty words are not enough," Sanders' website says in what could be a preview of his rhetoric Tuesday night. "This plan will ensure that corporations conduct business in a fair way – a way that treats workers and the communities in which businesses operate with respect."

Sanders' Monday post includes a long list of other progressive proposals, including reversing the Trump tax cut for corporations, a ban on noncompetes and forced arbitration, a provision giving the FTC unilateral authority to stop mergers without going to court and a requirement that large companies eventually become at least 20 percent employee-owned.