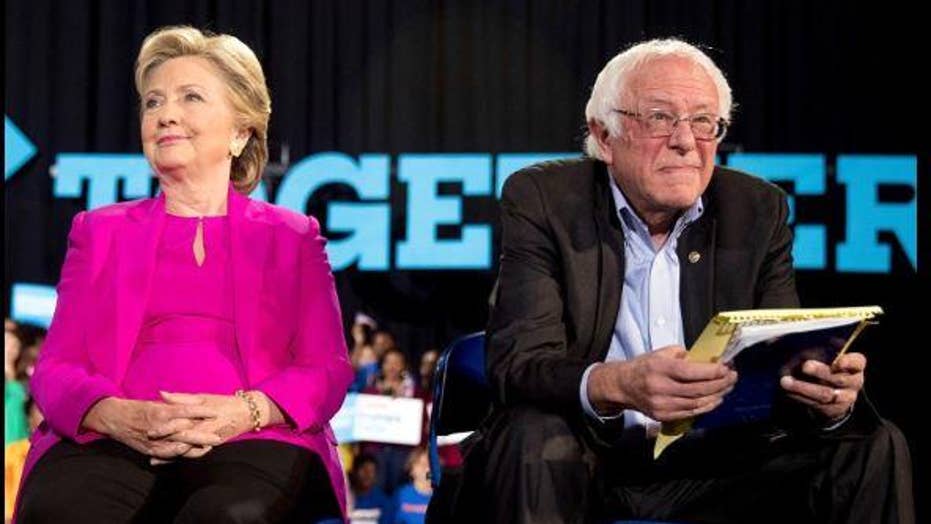 Bernie Sanders' 2016 presidential campaign spokesman Michael Briggs lashes out at Hillary Clinton and her team after former members of her campaign leaked details about Sanders' use of private jets to attend campaign rallies on her behalf.

But the independent from Vermont who last week launched his second straight bid for the Democratic presidential nomination downplayed the public unveiling of his financial details, saying “they’re very boring tax returns.”

LIFESTYLES OF THE RICH AND SOCIALIST

A rival for the nomination – Sen. Elizabeth Warren of Massachusetts – last August posted 10 years of her returns online.

Asked during a CNN town hall Monday night why the delay in releasing his returns, Sanders answered “well, you know, the delay is not -- it'll bore -- our tax returns will bore you to death. It's simply -- nothing special about them. It just was a mechanical issue. We don't have accountants at home. My wife does most of it. And we will get that stuff out.”

The populist firebrand and self-described democratic socialist owns two homes in Vermont and one in Washington, D.C. Sanders has also earned more than $1 million annually in recent years, though he remains on the lower end of Senate Democrats in terms of net worth.

Sanders faced some criticism for not releasing his taxes during his marathon 2016 primary battle with eventual Democratic nominee Hillary Clinton.

But Clinton made eight years’ worth of tax returns available in July 2015, early in the primary campaign and a year before the general election.

President Trump cast aside decades of tradition during the 2016 presidential campaign when he refused to voluntarily release his tax returns, which could give some transparency to his large real estate and entertainment empire that he touts is worth some $10 billion. Trump said at the time that his taxes couldn’t be released because he was under audit.

Democrats, who now control the House of Representatives, are taking steps to try to compel the president to release his returns. But Trump has repeatedly reiterated that he won’t release his personal tax returns or those for the Trump Organization until a review of the records is completed. And he’s argued that he wouldn’t release them because Americans elected him in 2016 without seeing his returns.

Sanders announced his 2020 presidential bid last Tuesday. As of Monday, six days after his campaign launch, the senator had raised an eye-popping $10 million from over 359,914 donors. Those numbers put him far ahead of his rivals for the nomination in the race for campaign cash.