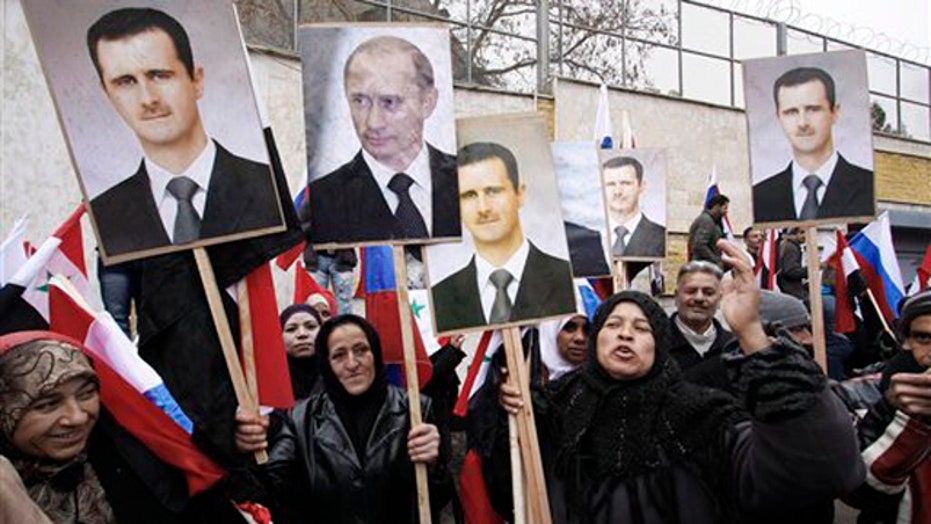 McFarland on Russia's Syria push: This is Putin's big moment

Four Russian attack helicopters have been spotted on the tarmac of a Syrian airport that the Pentagon says is being converted into a Russian forward operating base.

The arrival of the helicopter gunships follows the shipment of sophisticated battle tanks, and shows the Russian build-up in Syria escalating even after repeated complaints from the Obama administration.

A U.S. official who had been briefed on the latest intelligence over Syria early Wednesday told Fox News that two Russian Mi-24 "Hind" and two Mi-17 "Hip" gunships have been seen in the latest satellite imagery over Bassel al-Assad International Airport, in Latakia province along Syria's Mediterranean coast.

Right now, there is no sign the Russian gunships have taken their first flights over Syria, according to the official. But intelligence analysts believe the helicopters could be airborne soon as maintenance crews prepare them for flight after arriving from Russia.

The official said that An-124 Condor flights with cargo continue to fly into Syria at a rate of two a day, bringing the total of the massive Russian transport aircraft into Latakia to nearly 20.

There are still no signs of Russian fighter aircraft at the airbase in Syria, according to the official.

The shipments arrive as the State Department says Secretary of State John Kerry, the administration's point man in dealing with the Russians, called his Russian counterpart for the third time in the past 10 days on Tuesday.

The same day, Russian President Vladimir Putin said the military support to Syria would continue and warned the refugee crisis engulfing Europe would become "even bigger" without Russian assistance to the Assad regime.

The White House and Pentagon has called Russia's build-up in Syria "counterproductive."

Pentagon Press Secretary Peter Cook also told reporters Tuesday there would be no "red lines" set that would elicit a U.S. military response should Russia cross them. Cook said that Defense Secretary Ash Carter, to date, has not called his Russian counterpart, citing a suspension of "mil-to-mil" relations following Russia's annexation of Crimea last year.

Cook later clarified that this suspension did not prevent the defense secretary from reaching out on his own accord.

"There is nothing to prevent it," Cook said.

The arrival of the Russian gunships continues that build-up of offensive Russian military weapon systems inside Syria along the Mediterranean coast. In addition to expanding the airport with pre-fabricated housing for 1,500 troops and the arrival of tanks, Russian cargo ships have offloaded roughly 15 artillery pieces and 35 armored personnel carriers in Tartus in the past few days.

Russia has maintained a Navy base in Tartus, located 40 miles south of the air base they are expanding, for decades.