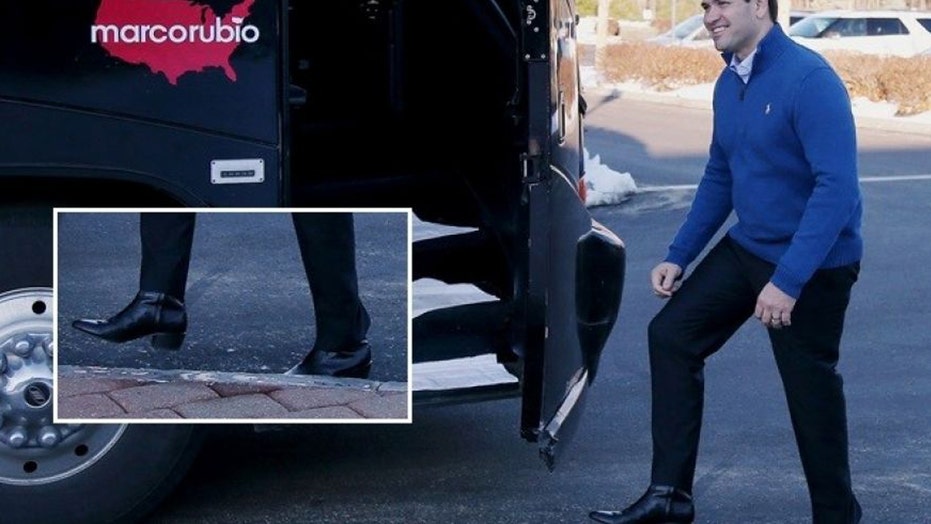 Marco Rubio's Republican rivals literally are hot on his heels, this time taking shots at the Florida senator for wearing shiny, black boots -- with a pumped-up heel -- that apparently only a fashionista can appreciate.

Rival campaigns – including those of Carly Fiorina and Ted Cruz – have teased him on Twitter over the boots, while fashion and political writers have spared no groan-worthy pun in describing them. Some have dubbed the craze over his fashion-forward choice “Bootgazi” or “shoegate.”

Fiorina got in on the action by posting a picture of her own black boots with 3.5 inch heels. She tweeted, “But can you rock these?”

Not to be outdone, Kentucky Sen. Rand Paul posted a video to Twitter before his Wednesday appearance on “The View.”

I was in Whoopi Goldberg's dressing room picking out new show shoes. Eat your heart out @marcorubio! pic.twitter.com/vF06UzZgAL

“We’ve seen Rubio has those cute new boots, and I don’t want to be outdone,” Paul said in a video post, which shows him in host Whoopi Goldberg’s dressing room holding a pair of sparkly black and gold shoes. He added, “Eat your heart out @marcorubio!”

“The boots -- which we think are either these Giogio Brutini boots or these Margiela ones – looks a lot like a pair favored by Styles, albeit with slightly less pilgrim flair.”

The Daily Mail kept it classy by comparing him with fashionista former President Nicolas Sarkozy of France.

At a town hall meeting on Thursday, Rubio responded to the shoe frenzy.

"Our economy is flatlined, the stock market is falling apart, but boy are we getting a lot of coverage about a pair of boots," he said. "This is craziness. People have we lost our minds."

No word on whether Imelda Marcos, widow of former Philippine President Ferdinand Marcos and known internationally for her expensive shoe collection, approves of Rubio’s boot of choice.