Sen. Rubio: Fauci is 'doing harm to, 'not helping' science

A day after she launched a much-anticipated 2022 Democratic challenge against Sen. Marco Rubio of Florida, Rep. Val Demings spotlighted a surge in fundraising.

Sources close to Deming’s campaign said that Orlando’s first female police chief-turned-congresswoman hauled in roughly $1 million in the day after she declared her Senate candidacy.

"The outpouring of support I've received in the past few days has been humbling. Thank you from the bottom of my heart," Demings tweeted on Friday.

Democrats touted that the fundraising figure was an early sign of Demings’ momentum.

Her campaign on Sunday told Fox News that "the outpouring of support for Val Demings candidacy from across Florida shows that Floridians are ready for a Senator who can take on the tough fights. Marco Rubio doesn’t have the courage to fight for Florida."

But the candidate needs to quickly build her war chest, as Rubio had nearly $4 million in his campaign coffers as of the end of March.

Demings' campaign cash surge is also a sign of just how expensive the burgeoning Florida Senate battle – which could be one of the contests to decide which party controls the chamber – will be in a state with nearly 22 million people spread out over 10 media markets.

"Both parties are going to invest heavily in Florida," University of Florida political science professor Michael McDonald noted. "It could be one of the most expensive U.S. Senate races in history given the trajectory that we’ve seen in increasing amount of money flowing into elections."

McDonald emphasized that "Florida really is the most competitive of the largest states and it has multiple media markets. It’s a very geographically spread out state, with a panhandle and a long peninsula. You can’t blanket the state from one central large city."

The total price tag – campaign and outside spending – for Rubio’s 2016 reelection victory over then-Democratic Rep. Patrick Murphy was nearly $110 million, a huge sum at the time. But the Sunshine State’s 2018 Senate race, when then-Republican Gov. Rick Scott edged out incumbent Democratic Sen. Bill Nelson, was nearly double the cost, with roughly $205 million spent by the candidates, parties, and outside groups.

That race was the most expensive in history, until last year when spending in the Senate race in North Carolina topped $280 million, smashing the Florida record.

Demings' announcement gave the Democrats a nationally known and high-profile candidate in the race against Rubio, who was first elected to the Senate in the 2010 Tea Party wave and who grabbed plenty of attention during his unsuccessful 2016 GOP presidential nomination run.

Demings, who is Black, spent nearly three decades in law enforcement, rising through the ranks to become the Orlando Police Department's first female police chief. Last year she was seriously considered as then-presidential nominee Joe Biden's running mate. And this year she served as one of the House impeachment managers for former president Trump’s second Senate trial.

Because of her background, some Democrats say it would be hard for Republicans to pin the "socialist" label on her. 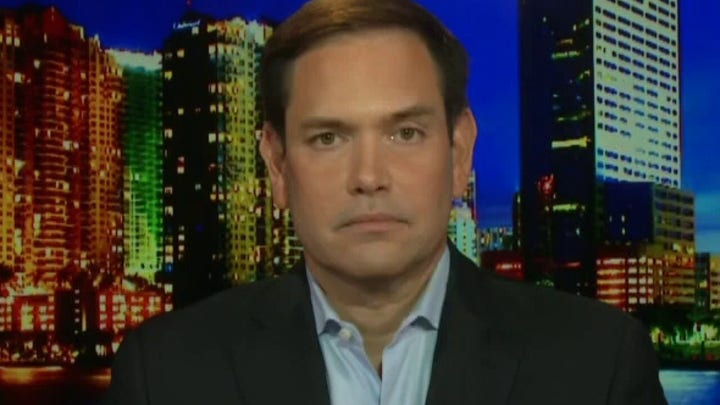 Asked about Demings, Rubio dismissed any description of her as a moderate.

"None of them will admit to being a socialist. She probably won’t. But she certainly has voted for socialist things," Rubio argued in a recent Fox News interview.

"At the end of the day they can call themselves whatever they want. People see through it for what it is," Rubio emphasized.

Democrats have faced setbacks in statewide contests in Florida in recent years. Trump won the state both in his 2016 presidential election victory and in last year’s reelection defeat, and the GOP narrowly won both the gubernatorial and Senate contests in 2018.

In an interview with the Orlando Sentinel, Demings acknowledged she's in for a "tough fight" against Rubio, whose parents immigrated from Cuba.

But she called out the senator for voting against coronavirus relief aid this year, which included another round of stimulus checks. She said she'd stand up against laws that suppress voting and discriminate against transgender youth and would vote to eliminate the Senate filibuster to protect "basic rights.