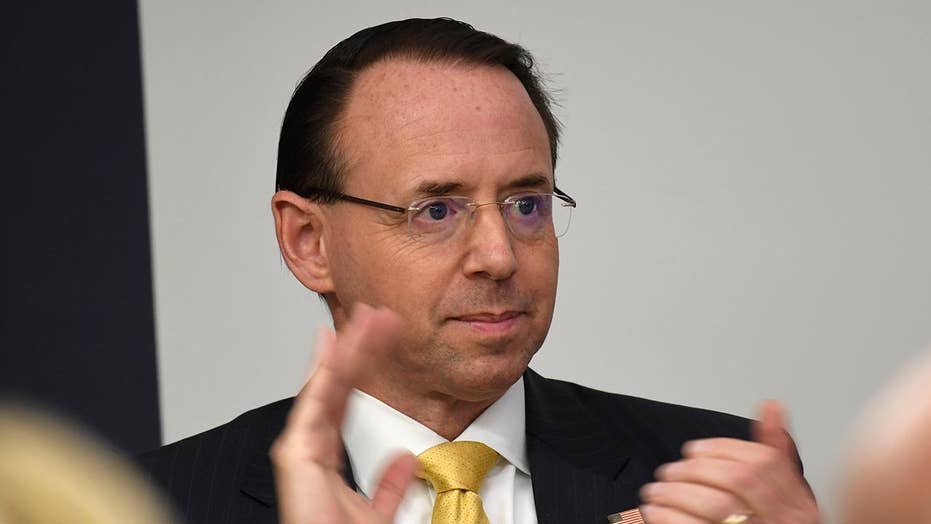 Beleaguered Justice Department No. 2 Rod Rosenstein raised eyebrows Thursday night with a private speech in which he took a swipe at the Obama administration and slammed ex-FBI boss James Comey.

Rosenstein, the U.S. deputy attorney general who supervised the Mueller investigation, spoke out publically for the first time since the report was released, criticizing the Obama administration’s real-time reaction to Russian hacking and its decision "not publicize the full story" to the American people.

Rosenstein, who was speaking in New York at the Public Servants Dinner of the Armenian Bar Association, defended his handling of the probe and criticized former officials in the process. He also called out former FBI Director James Comey for alerting Congress about the investigation into Russian collusion at the height of the 2016 presidential campaign.

“The FBI disclosed classified evidence about the investigation to ranking legislators and their staffers,” he said. “Someone selectively leaked details to the news media. The FBI director [Comey] announced at a congressional hearing that there was a counterintelligence investigation that might result in criminal charges. Then the former FBI director alleged that the president pressured him to close the investigation, and the president denied that the conversation occurred.

"So that happened,” he joked.

The Obama administration has been criticized for its handling of the Russian interference. Trump has blamed Obama for not acting quickly enough to stem Russia’s influence during the campaign.

In 2016, NBC News, citing unnamed high-level officials, reported that the Obama administration did not respond more forcefully because it did not want to appear to be interfering with the election. One official told the network at the time, "They thought [Hillary Clinton] was going to win, so they were willing to kick the can down the road."

A reporter for NPR said the Obama administration debated how to handle the information and decided that Obama should deal with Russian President Vladimir Putin privately about the matter.

The Rosenstein speech touched on a lot of topics.

He blasted “mercenary critics” who benefit financially by expressing “passionate opinions about any topic, often with little or no information. They do not just express disagreement. They launch ad hominem attacks unrestricted by truth or morality. They make threats, spread fake stories and even attack your relatives.”

Rosenstein has maintained a tenuous relationship with Trump. Congressional Republicans have also accused him of withholding documents and not investigating aggressively enough what they contend was political bias within the FBI.

Fox News has confirmed portions of the transcript to the House Oversight and Judiciary Committees.

"At my confirmation hearing in March 2017, a Republican senator asked me to make a commitment," he recalled. "He said: “You’re going to be in charge of this [Russia] investigation. I want you to look me in the eye and tell me that you’ll do it right, that you’ll take it to its conclusion and you’ll report [your results] to the American people.

"I did pledge to do it right and take it to the appropriate conclusion. I did not promise to report all results to the public, because grand jury investigations are ex parte proceedings. It is not our job to render conclusive factual findings. We just decide whether it is appropriate to file criminal charges."

Rosenstein is leaving his post in two months. He had some fun with his speech and answered the question that so many on social media were asking after watching him standing stoically behind Attorney General William Barr during the lead-up to the Mueller report release.